Things are about to get hot with Playson’s scorching slot Solar Queen. We return to ancient Egypt with Cleopatra as our host. This game doesn’t follow the classical ancient Egypt slot style, it brings in a very different approach as opposed to what we’re used to.

Solar Queen is packed with consistent flaming wilds, it’s an action-filled experience. The main game can be as exciting as the bonus game, this is a rare quality that only a few slots posses.

Everything around seems calm, mysterious Egyptian music is playing in the background, dark blue skies are spread across the water basin and, just faintly, we see pyramids across the horizon. Solar Queen has a polished look to it, clearly doesn’t strike as a rushed project.

Once you make a couple of spins, straight away, the pacing increases. It feels like, with every spin that’s made, we approach closer to a culmination and rightly so, as every spin leads us closer to one of the bonus features, that we are going to cover later on.

There are plenty of symbols in Solar Queen, they are also sorted in four separate value sections. The lowest bunch are all of the Royals (10, J, Q, K, A) with a value of 3.00 for 5x. A step above, with a value of 6.00 for 5x we have four statues of animals, including ancient Egyptian favourites like an owl and a cat. With a slightly increased value (7.50 for 5x) we have the next section, which consists of only to symbols. The best regular symbol you can land is the Cleopatra herself (20 for 5x). Cleopatra also can cover the whole reel as one big symbol.

Stats wise, Solar Queen is on average the same as most of Playson games, especially if we talk about volatility – medium/high is often used on other titles from this provider.  Same goes for bet range of 0.20 – 100EUR. Max payout is a step above though, 2668x is quite a competitive number, it’s great to have such a payout on a game like this.

On the upper right corner, we can see a bar with Spins written on it. This bar is used to track your progress on Flaming Frames Feature. Every spin you make adds to the progress bar, in total there are 10 sections. This is also called the 10-spins cycle.

There are Sun Symbols that randomly land anywhere on the reels. After they land, these symbols turn into Flaming Frames. These frames stick to the reel until the 10-spin cycle come to an end. In the end, on the 10th spin, all the collected Flaming Frames turn into Wilds. So, if you have managed to collect a bunch of frames, then on that 10th spin you have a great chance to score a big win. 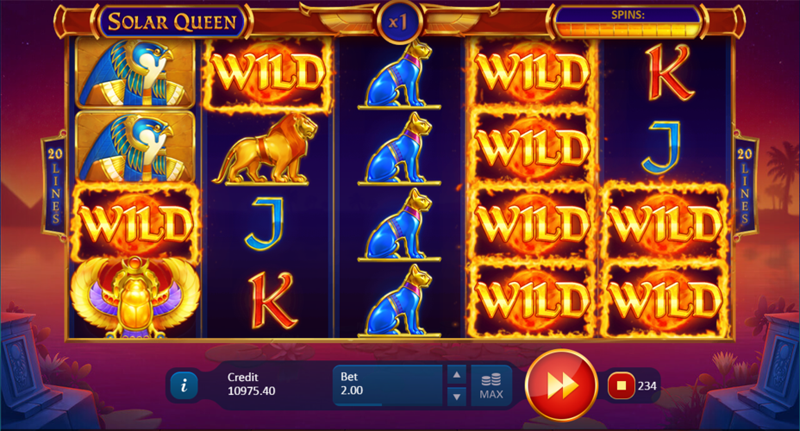 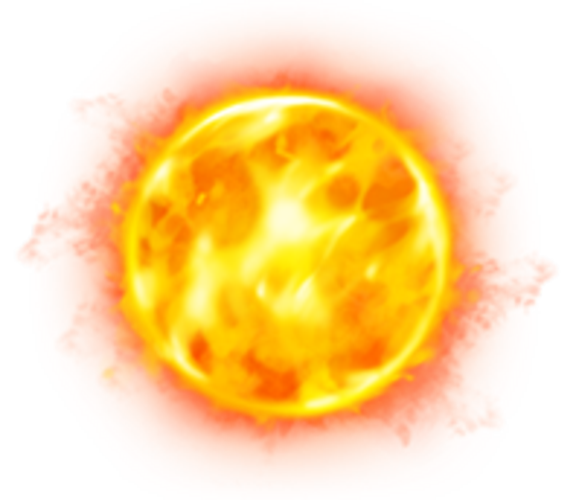 If another Sun Symbol lands on an already flaming frame, you receive a Winning Multiplier. Every extra sun symbol adds 1X to the total multiplier. This multiplier is then applied to every win that falls into the current cycle. After the cycle ends, the multiplier is reset back to zero and the flaming frames disappear. Solar Queen, just like sun and earth, works around cycles.

In ancient Egypt, scarab beetles were a popular symbol. There was a lot of jewellery made in the style of these animals and so also on Solar Queen, the Scatter symbol for Free Spins is a gem beetle. These scatters land on the 1st, 3rd and 5th reel. To trigger 10 Free Spins, players must hit three of them. Opposed to the main game, in Free Spins feature, Sun symbols turn into Wilds immediately and they stick there until the end of the feature. Any winning multipliers you had from the main game also carry over to the Free Spins feature.

Solar Queen for sure is one of the stronger displays from Playson. There are plenty of games where Free Spins are the most important part of the slot and the main game is just a waiting room for them. On Solar Queen, every part of the game can be exciting. The 10-spin cycle makes the main game so much more enjoyable and meaningful. To all the ancient Egypt theme fans that are looking for something new, Solar Queen would be a good place to start.

Legend of the Sword

Perhaps the most famous sword that has ever graced the hands of a warrior – the Excalibur. Claim it and the 10,000x payout

A combination of Manga and slots has produced Royal Rumble XtraGacha. Try out this Japanese comic book style game!