Akhenaten is perhaps one of the lesser-known Egyptian pharaohs. He forbade the worship of traditional gods, instead introducing a new religion, that was centred around Aten, a single deity. Soon after his reign, people went back to the old ways, shunning and rejecting the late pharaoh’s views and ideas. Henceforth his name was lost in time until explorers stumbled upon some old relics and the Tomb of Akhenaten, which is also the name of this Nolimit City slot. 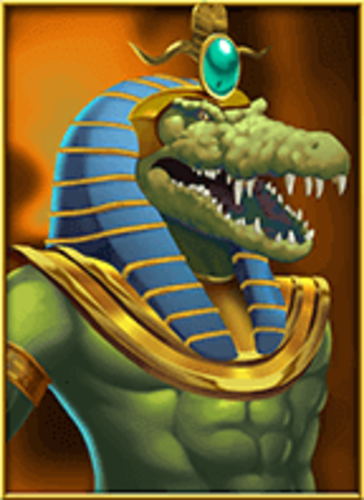 For some he was revolutionary, for others a heretic, the infamous life of Akhenaten is definitely an interesting choice of theme, but it is interesting that Nolimit City has gone down this road. This is also why it would be unfair to consider the Tomb of Akhenaten just another Egyptian slot, even though it looks exactly like one. This only the second Egyptian themed slot from Nolimit City, as their initial title Tomb of Nefertiti was about Akhenaten’s wife. Tombs of pharaohs are filled with riches and gold so the huge 26,261x max payout comes as no surprise.

Tomb of Akhenaten takes on a darker side of the presentation. Most likely, the first thing you notice is the mysterious and creeping background music, which gets more dramatic once the action intensifies, the cello does wonders you know. The background visuals for Tomb of Akhenaten are not all that impressive, as we only see two pillars and an occasional scorpion crossing over. The mix of brown and green aesthetically is not the best look, but it will do for now. Tomb of Akhenaten uses the regular 5x3 layout, but it can be stretched out with the help of bonus features, we will get to that in a bit. 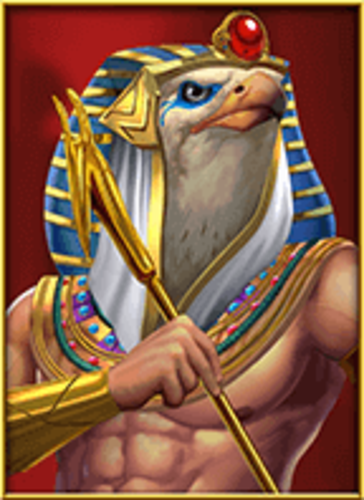 Due to these features, Tomb of Akhenaten comes with paylines ranging from 243 to 3125. In total there are 10 regular symbols which then can be split into low and high paying categories. Low-value symbols are card royals, ranging from 10-A respectively, meanwhile, high-value symbols are different deities, which are portrayed originally, being half human half animal. These gods are Bastet, Thoth, Sobek, Anubis and Ra. All these Tomb of Akhenaten symbols have a menacing look to them, but they never have been particularly smiley, to begin with. The regular wild symbol is a female explorer.

Nolimit City never provide measly payouts. Tomb of Akhenaten takes it one step further with a robust max win potential of 26,261x. The volatility has been rated 9/10 while the general hit frequency is around 26.22%. This means that pretty much every fourth spin is a win. You have to take into consideration that with every win follows a respin, which makes the hit frequency even more appealing. Tomb of Akhenaten RTP is also just on that average mark, being 96.09%. The betting range follows the Nolimit City stock setting of 0.10 – 100.

Sticky Win Spins is a feature that’s constantly active throughout the whole game, main and bonus. You will encounter this Tomb of Akhenaten feature after every winning spin. After the first win, another row will be added on top, which comes with a new set of symbols. Another win triggers the addition of the fifth row, which then respins as well. Finally, a third consecutive win respins all the non-winning symbols. Also, during the third respin, you will spot circled meters above each reel. If the indicator lands on top Pyramid Wilds are added to the specific reel or reels. An already existing Tomb of Akhenaten wild turns into a double wild if another one is added. 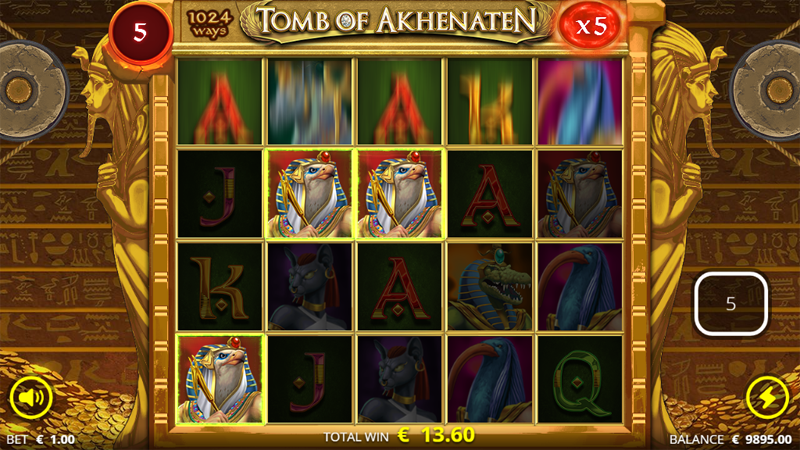 The main bonus game for Tomb of Akhenaten is the Akhenaten Spins. These are triggered by 3 or more Bonus symbols. Starting spin amount is 8, but each extra symbols adds 2 more spins. Sticky Win Spins feature is present the same way it is during the main game, but now each win also adds a win multiplier which doesn’t reset between spins. Every new Akhenaten bonus symbol provides an extra spin. Akhenaten Spins can also be bought for 65x and 105x for 8 and 12 spins respectively.

Just like the pharaoh himself, Tomb of Akhenaten is an interesting slot. It may not come off that way, but Tomb of Akhenaten has some serious potential. The Sticky Win Spins set a very peculiar game model, the constant respins and additional rows really add another dimension to the game, making this slot’s main game something more than just a plain bonus grind. Tomb of Akhenaten will not go down in history with its visual design, but gameplay and payout wise we are looking at a very solid slot, that once more solidifies the prominence of Nolimit City slots.