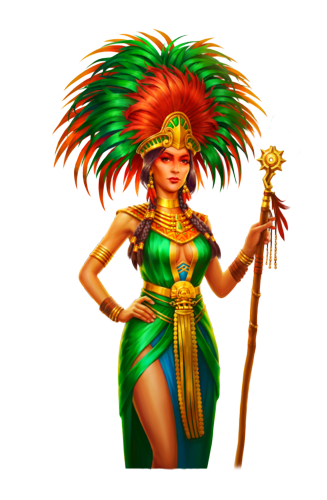 It's once again that time to scorch up the reels and get some flaming wins on Playson's Aztec adventure called Solar Temple. This game comes as a second Solar type slot, as we have previously covered the Solar Queen slot.

Flaming Frame is the main talking point, as this was a hot feature in the previous game. Scorching Wilds are back to maximize the winning potential. Talking about the potential – the max win is cranked up to an insane 20 000x. This game offers something that has worked well in the past, but can it do it again?

Straight away, the slot throws us in the middle of a jungle. Background soundtrack makes it feel like we are stepping on forbidden and forsaken grounds, perhaps some secret treasures are hidden where we stand. In its core, Solar Temple is very similar to Solar Queen - the theme has changed, most of the visuals and sounds effects are different, but it still has that same feel. 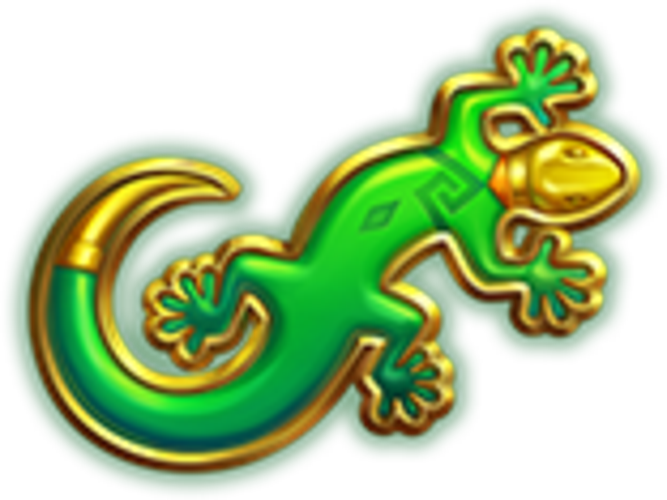 For those who are not so familiar with the previous iteration, the predecessor of Solar Temple was a big hit and one of the most successful games for Playson. Solar Temple is aiming to take that spot. When it comes to gameplay and how smooth it is, we don't have any complaints - this has never been an issue with Playson. Of course, these slots are not visually complicated - it is why this shouldn't come as a surprise. 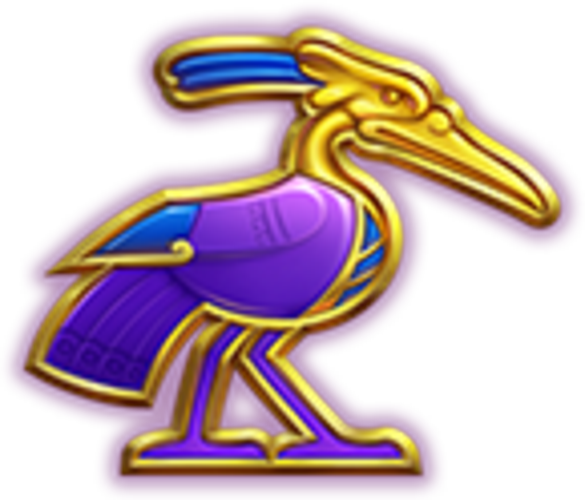 Solar Temple provides some authentic Aztec styled symbols, which come in a full spectre of rainbow colours. Five royals don't come with a unique design, but each of them has their colour. Already on the second tier, we have four animal-shaped statues like a cat and lizard; the payout value also has doubled on this tier. The third tier on Solar Temple is represented by two Aztec masks, one red and the other green. Finally, the most valuable regular symbol on Solar Temple is an Aztec woman, who is dressed in expensive royal garments.

Here is the biggest surprise we have on Solar Temple, the max payout of 20 000x, which is one of the biggest payouts we've seen on Playson slots. Before you get overly excited, remember that this result was replicated after a billion test spins. So, realistically it won't be as easy as taking money out from ATM, but still, the chance is there. Solar Temple RTP falls on the low side a bit, being 95.22%. Things like paylines and volatility follow the usual Playson pattern, so no changes here.

The part we all been waiting for, what's new and what's old on Solar Temple bonus features. For better or worse, there are no changes to the bonus features, but we will take a look at them anyway, in case this is your first Solar slot experience.

The passive feature that is active in the main game is the Flaming Frames Feature. Action is split between 10 spin cycles, and it relies on Sun symbols. These said symbols land on the reels randomly, and once they do, a flaming frame stays in the place where they once were.

At the end of the cycle, after the 10th spin, these frames turn into Wild symbols creating more additional wins. If a sun symbol lands in a place where there already is a flaming frame, a total Winning Multiplier increases by 1. 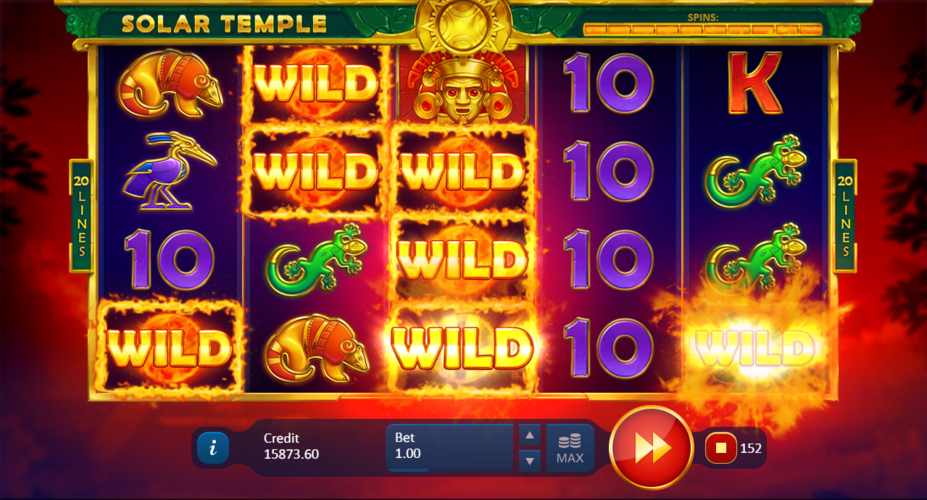 It wouldn't be a complete game without some Free Spins, so Solar Temple offers just that. Like usually, 3 Scatter symbols do the trick to trigger 10 Free spins. The main change is the way that Sun symbols work. Every Sun symbol turns into a Wild straight away, without a need to wait for the cycle to end. These Wilds then stay in the place until the feature comes to an end. It's slightly disappointing that there is nothing new when it comes to bonus features, but understandably it's hard to change up a successful winning formula. 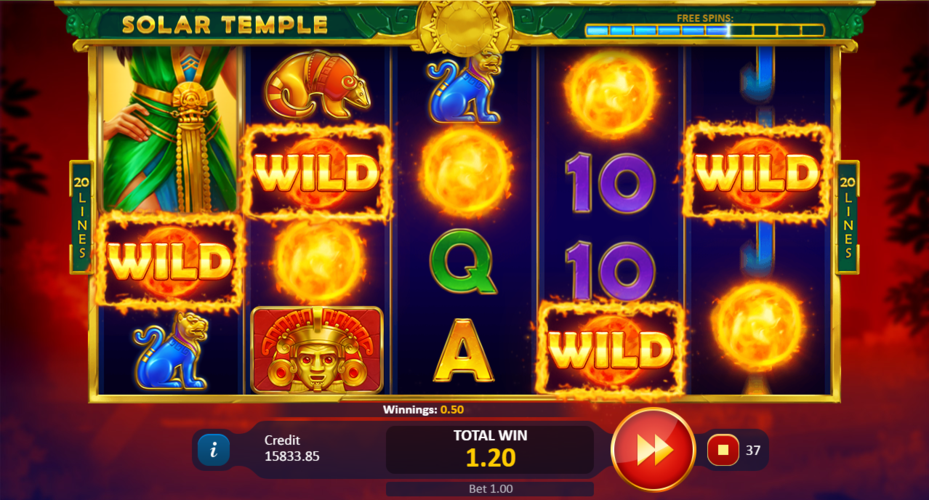 The biggest change on Solar Temple is most notably the max win, this payout of 20 000x comes as an unexpected but pleasant surprise. Besides the general theme, everything else stays the same as it was. If the lack of change is good or a bad thing is up to you, in our eyes Solar Temple is another solid release from Playson.