Candy Island Princess is made in an anime style, which is interesting because we don’t get too many of these slots. It is also one of those settings that haven’t been that popular in the iGaming world, even though anime has a huge following. Some of the strongest displays come from NetEnt and Play’n GO with games such as Koi Princess and Moon Princess. You might have also spotted what both of these games share, it’s the princess tag. Is this a coincidence or princess slots tend to do better? Let’s find out. The game starts off with the splash screen and a commentary which introduces us to the slot. The announcer Bon-Bon has a Japanese accent, which, I guess, is a nice touch. Candy Island Princess has a nice party vibe to it. We see the sunny beach in the back, with palm trees moving from the light breeze. Our three heroes are competing for the title of Candy Island Princess, but you can decide which is the winner in your heart. The slot comes with a 3 reel 3 row set up. The popularity of this layout has dropped throughout the years, but from time to time there are some shining examples of excellence.

With a 3x3 layout, there isn’t much space for paylines, so we only got 5 in total. This, of course, is totally normal for such games, so don’t think it’s anything below the standard. Alright, let’s get into the moment that everyone is waiting for, the Candy Island Princess game symbols. Low symbols are four pieces of candy while high symbols are 3 girl contestants – Coco, Cookie and Hunnie. These bikini wearing ladies definitely steal the spotlight. Of course, it depends if anime girls are something up your alley.

With all that’s happening on screen, you almost forget that this still is a video slot. Seems like Play’n GO used the attention-grabbing visuals to mask the mediocre payout stats. The 3 by 3 slots have never been overly generous, but with low-medium volatility, we get very light gameplay that struggles to provide big wins on a general basis. If you do manage to score one of the features, then it is possible to get to that 2,200x payout. Candy Island Princess RTP is 96.20%, which is okay. The bet range is 0.05 – 100, so it is possible to place lower bets if you wish to try out the game without going in too hard.

Surprisingly, there are a fair amount of bonus features on Candy Island Princess. Sure, not all of them are big standalone features, but it’s still nice to have a good variety. The three princesses can form a winning line freely with each other, but if you land a win with 3 matching princesses then the Candy Splash feature is awarded. The 3 matching symbols will expand, fully covering all 3 reels. 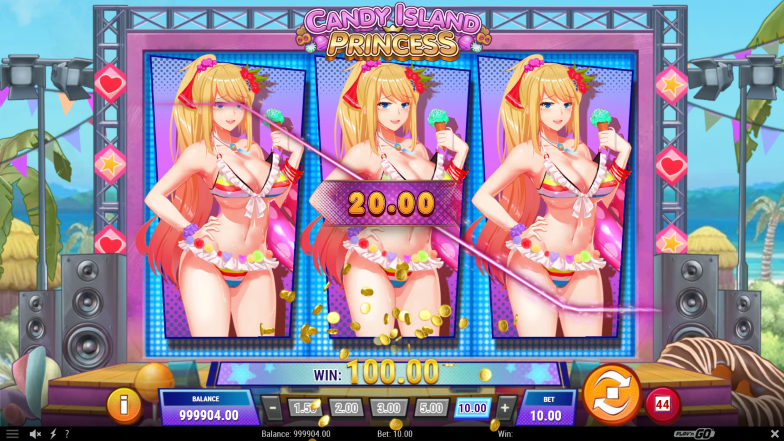 Next in line, we got Super Mega Fantastic Free Spins. This wordy Candy Island Princess bonus feature is triggered by 3 Ticket symbols. If you land just two Tickets, then a respin will be activated, giving you another shot to gain entry to the bonus. The special addition to the bonus is the upgraded Candy Splash. Now also mixed symbols fully expand, so it’s not necessary to match all three character symbols. On the last Free Spin, it’s possible to trigger a feature re-spin. After the Free Spins feature is done, a Jelly Jiggle Delight feature is activated. Players will be able to pick one of the three jellies. The lucky jelly contains a 2x multiplier, which is added to the final Free Spins win. 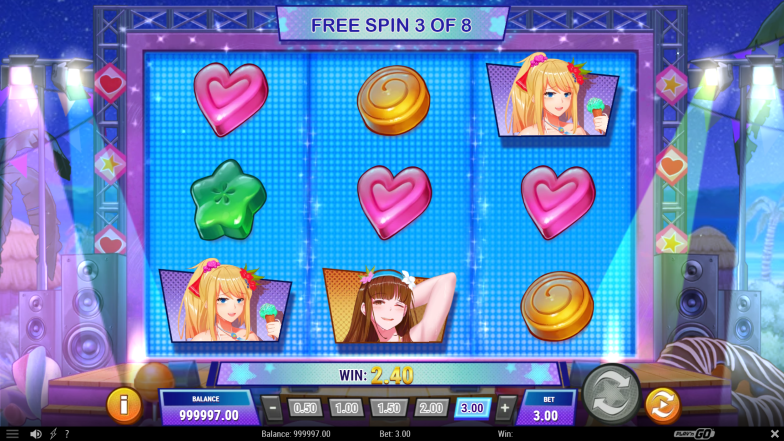 Last but not least we got the Candy Island Princess Behind The Scenes feature. This basically is an instant cash prize bonus. At a minimum, players can get a 5x win, while the highest possible instant prize is 2000x. Entry to this feature is gained by 3 Camera symbols.

We believe that Candy Island Princess is a very specific slot, in a sense, that it is aimed at a very specific target market. Anime has a huge following, but it doesn’t have that strong of a foothold in the iGaming industry. Maybe with time, that will change as a new generation of players will get into this world, but for now, we don’t think that Candy Island Princess is going far in terms of popularity. The gameplay model is light, so it’s meant more for casual play, which means that jackpot players will not even bother to open it.