1800s were especially prominent for fortune seekers. The gold rush was in full effect and prospectors from all over the world came to America for their share of wealth. There are plenty of miracle stories, so naturally, this is a very appealing theme for slot creators. Nothing signifies wealth more than gold right? Old dusty railroad brings us to the small village of Santa Maria. If you’re in Mexico, then you have to go full loco with tacos and trains apparently. Taco Brothers Derailed combines all these fun elements and then some. This ELK Studios slot is here to entertain you, so kick it back and enjoy the craziness that awaits you.

The story is simple – prospectors are freely searching for their fortune, but the Evil Captain Diaz has other ideas. He plans to steal everything that these folks worked so hard for. Fortunately, for all of us, three Taco Brothers Paso, Pepe and Pico are here to set things straight. You might have met them before on another ELK Studios slot called just Taco Brothers. There is also the Taco Brothers Saving Christmas, so we can safely say, that these guys have a fair share of experience in saving things. Now they are back for some more action with Taco Brothers Derailed slot. Things are about to get loco, do you think you’re ready for the thrills that will follow?

We feel like it’s important to point out that Taco Brothers Derailed is not an authentic Mexican slot. It’s a bit satire and the Mexican theme is overexaggerated, but that’s how the original Taco Brothers game was, so it’s not surprising. Still, this new Taco Brothers Derailed slot is quite fun. It has its own plot and special visuals, so you shouldn’t get bored with it too quickly. The sleepy town of Santa Maria looks like any other Mexican village that you see in modern media, but that’s not a bad thing, because these small towns are quite cute. ELK Studios have decided to give this slot 6 reels and 4 rows. 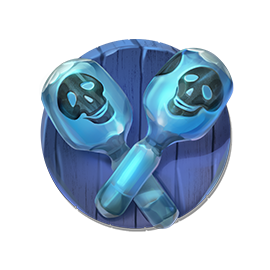 ELK Studios' visual team has done a really solid job once more. Their unique style is represented by Taco Brothers Derailed slot symbols. Paytable is full of all kinds of interesting symbols. If we begin with lower values, we’ll see things like whistles, skulls, safes full of gold and of course our three heroic brothers Paso, Pepe and Pico. Symbols are colourful and unique, which is one of the ELK Studios' strengths – the ability to create new symbols for each game, not often recycling classic ideas. For a successful combination, you will need at least 3 matching symbols. Combinations are made on 466 paylines.

Taco Brothers first appeared on our screens way back in 2015. It may not seem that long ago, but we’re talking about 7 years, and in the iGaming industry that definitely is long. Naturally, the payouts have seen a massive overhaul, to match the modern standards. The max win now is 10,000x which is a lot more than it was all those years back. The RTP for Taco Brothers Derailed is around 95%, while volatility is rated (7/10), so it falls somewhere in that medium-high range. You will be able to play this new ELK Studios slot on all devices.

All three Taco Brothers may also appear as Walking Wild symbols. These Walking Wilds move leftwards while triggering respins. Once they reach the leftmost side, they fall off. Similar but different is the Walking Multiplier Wild. These Wild symbols only appear on the top row, but they carry an extra multiplier. They too award Free Spins as they move to the leftmost side.

Masks on muchachos, it’s time for the Taco Train Heist. Get at least 3 bonus symbols on Taco Brothers Derailed and you will be rewarded with Taco Train Heist Bonus. You are guaranteed to see all three Walking Wilds during this bonus. Taco Brother Wilds will also carry an extra multiplier in their pocket and they will always appear on the 6th reel, meaning that they’ll stay on the screen longer. One by one, the brothers will walk across the game layout. Captain Diaz though, will try to lock up these brothers. On the other hand, Senorita can either unlock or pull back a Walking Wild Taco Brother to reel 6. The bonus game ends when all brothers have walked off the reels or if they have been imprisoned.

If you manage to hit exactly 4 bonus symbols on Taco Brother Derailed then the premium bonus game called Taco Smash N’ Grab is awarded. This feature brings jalapeno levels of spiciness because now all Taco Brothers and the Walking Multiplier Wild move simultaneously from right to left. Senorita can still pull back Wilds, but Captain Diaz is behind bars, so instead of imprisoning them, he just simply turns into another Wild symbol. 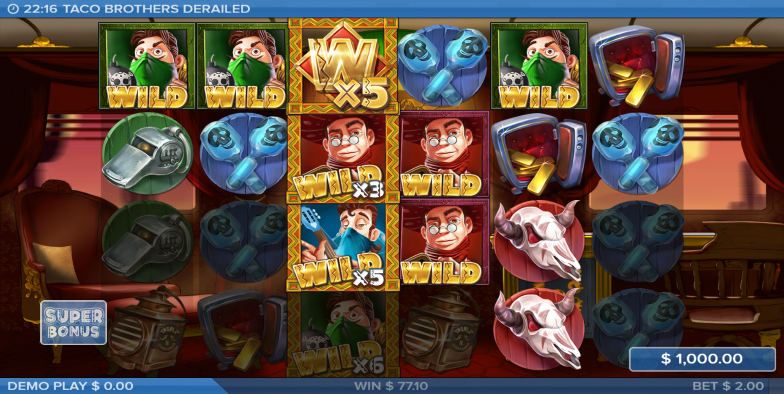 Triggering bonus the classic way can be a challenging task, so all features on Taco Brothers Derailed can be purchased through X-iter. This classic ELK Studios mechanism provides the five following options with the following prices:

ELK Studios had lengthy 7 years to think things through, and they have come to some sound conclusions. Taco Brothers Derailed keeps the spirit of the old game, but it now has a brand new outfit, which dazzles more than before. Running around with the Taco Brothers still is the main objective, but the results of this tango are now much more appealing. Players can try to trick the evil captain and score a winning heist worthy of 10,000x. Taco Brothers Derailed contains more Wilds and more multipliers, which means more fun and wins for you. We’re glad that ELK Studios decided to revisit this classic game because the end result is wonderful.

What is the max win on Taco Brothers Derailed slot?

What is the minimum bet on Taco Brothers Derailed?

When is Taco Brothers Derailed available in online casinos?

Taco Brothers Derailed is officially published on the 7th of June 2022.

Step into the shoes of a brave adventurer and go deep into the jungle in the search of Mayan treasure. MexoMax! is a stunning cluster pay slot

Fire in the Hole

From the streets to the underground. Mine massive wins and become as rich as a dwarf. Nolimit City have done it again.