We’re taking a trip to the Native American heartland, where the indigo blue sky is lit up by the moon, as wolves howl the night away. Thunder Bird is summoning all other Spirit Animals, for them to empower the reels that we’re about to spin. Totem Thunder is a slot from Quickspin that has a planned release in October 2022. Quickspin are discovering some new ways with Totem Thunder, but it still remains a true Quickspin slot as it features many bonuses and attractive payouts. It seems that Quickspin are more and more adventurous with the stuff that they have lately produced. We’re seeing more variety in visual style and gameplay, a good example being the Trail of Blood slot. How well does Totem Thunder perform though? Time to find out!

When looking at Totem Thunder we’re filled with a feeling of déjà vu. For a moment it’s hard to put a finger on the exact cause, but then you start to realize that this slot visually looks a lot familiar to the visual style that’s used by Peter & Sons. Alternatively, it also slightly reminds us of the animated series Adventure Time. We’re not particularly sure who got inspiration from who, but there is a bit of a resemblance. 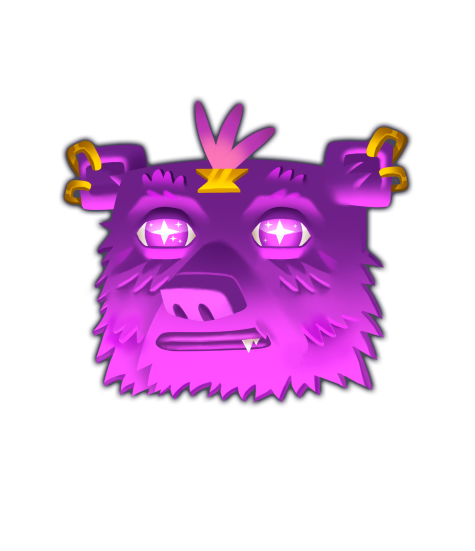 All things considered, Totem Thunder is a great-looking slot. It’s not a style that Quickspin tend to often use, but as we said, they seem to be exploring new ideas, so we’re welcoming the change. It’s a peaceful night, as the fire crackles in front of our 5 reels. It has that sense of tranquillity which reminds us of another Quickspin slot called Northern Sky. Totem Thunder is a nice-looking slot, although we can’t shake the feeling that we’re looking at Peter & Sons product.

Coming in with 25 paylines, Totem Thunder offers 8 regular symbols which are equally split into lows and highs. Low-value symbols are considered gemstones and high symbols are these mysterious Spirit Animals, styled in vibrant colours. Totem Thunder is giving of these weird vibes and we’re not sure if we like them or not.

Alright, for now, enough about the visuals. It’s time to see what potential this slot holds. Quickspin have never been shy to offer good payouts and they aren’t shy now, providing a max win of 8,623x! Totem Thunder is highly volatile with a lot of serious action, so don’t let the peaceful presentation fool you. The Return to Play or RTP for short is 96.02% on Totem Thunder. Epic wins occur about 1 in a thousand spins. Totem Thunder will be available on all devices with a bet range of 0.25 – 100.

Totem Thunder is rich with features, which make the game versatile. For the most part, these are straightforward features, but let us go through them nonetheless.

Totem Thunder is a tumble slot, hence it comes with Tumbling Reels. The winning symbols are removed vacating spots for new symbols to drop in from above. Pay special attention to the Totem on the left side. If after a tumble, the top Totem symbol is blue, green, purple or red, the corresponding low symbols are upgraded to high value, so always keep in mind the colours of the symbols. Any upgraded symbols add a +1x multiplier to their respective colour. If the top Totem symbol is golden, then all low symbols on the reels are upgraded to high values.

Of course, there is also the main bonus game on Totem Thunder called Thunder Free Spins. To get it rolling, you’ll need to land 3 or more Bonus Scatter symbols in one game round. The base reward is 10 Free Spins, but every additional symbol adds +5 spins. During this bonus, all colour multipliers are progressive, as they don’t reset between spins. Thunder Free Spins feature may also be purchased for 150x. 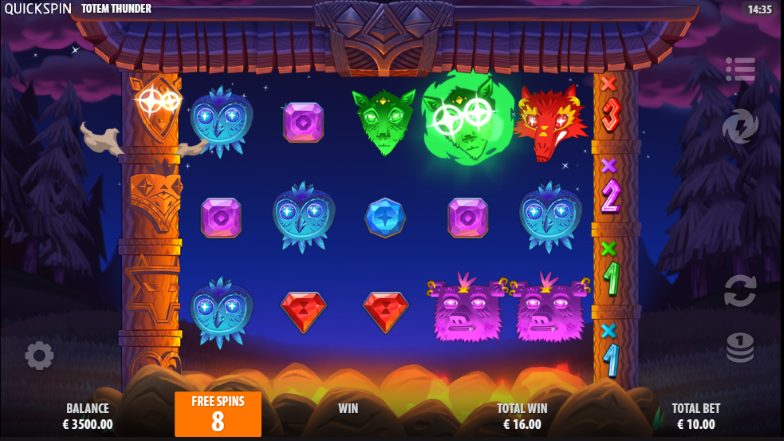 Well, Totem Thunder certainly was something else. We’d like to say that Quickspin are expressing their creative side, but is this creation really solely theirs or have they nicked an idea or two? We’ll leave that final judgement to you, but overall Totem Thunder is a highly enjoyable video slot. Interesting visuals, simple but wonderful features and strong potential. These colour multipliers and symbol transformation create an interesting gaming model. Totem Thunder is perhaps a bit odd, but there is something strangely charming about it.

Which other Quickspin slots I may play on SixSlots?

On SixSlots you will find many Quickspin slots, we recommend having a look at Warp Wreckers, Crystal Prince, Ghost Glyph and Hammer of Vulcan.

Can I play Totem Thunder for free?

Yes, just use the available demo players, which you will find on this page.

What is the minimum bet on Totem Thunder?