Going down a mining shaft with Nolimit City is something that we’ve already done before, but this is a provider that doesn’t lack new ideas, so there must be something fresh and exciting in this release. If there is a certain feeling of Déjà vu, then you might have played slots like Fire in the Hole xBomb or Misery Mining. Dead Canary again shows the brutal side of mining, which tells stories of the danger and misery that comes with the business, but it’s not the miners that take the main stage.

Back in the day, there weren’t fancy gadgets which miners could utilise for their advantage and safety, so for many years, miners used caged canary birds as detection devices for poisonous gasses. You see, these birds would experience the negative effects much more rapidly than a human body would, so a new idea was born. Ruthless? Perhaps, but it was effective, hence we get the name for this slot – Dead Canary. It wouldn’t be a Nolimit City slot if there wasn’t a layer of darkness added.

Welcome to this deep and uninviting grotto, which is where the action of the Dead Canary slot will take place. Dead Canary is a more direct sequel to Misery Mining, as we get the same visual style, that thumping soundtrack and our one-eyed main protagonist. Dead Canary certainly has that same Nolimit City gloominess, that many other of their games possess, but the visuals aren’t that striking and memorable if you compare it to some other hotshots. Rocks and a yellow puddle of a mysterious liquid is pretty much all that you’ll see in the background. 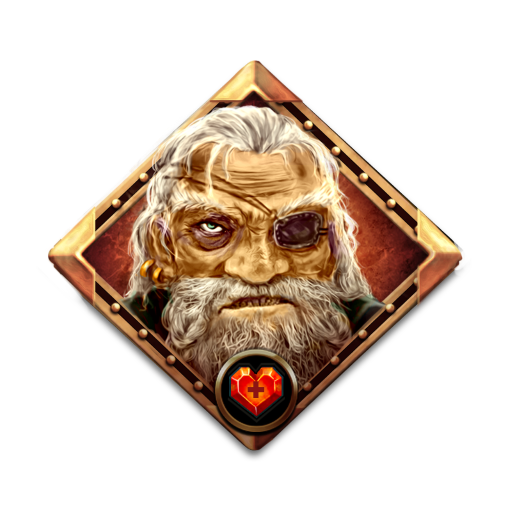 The layout on Dead Canary slots is special, as it’s quite far from the traditional reel set-up. By default, you will have 6 reels and a 3-3-2-2-1-1 row configuration, so it almost looks like a piece of honeycomb. By unlocking additional positions, more row spots can appear. There are no traditional paylines, instead wins are made by matching at least 3 symbols on adjacent reels. There is also an implemented cascade mechanism, so winning symbols create a space for new symbols to drop in from above.

No surprises, Dead Canary is a slot with very high volatility. This mining journey can possibly lead to a 65,000x win. This is almost the same as it was on Misery Mining and it’s needles to say, that this potential is absolutely bonkers. This heavy-hitting potential is accompanied by a 96.02% RTP. It may not be the most pleasant RTP, but as long as it’s above the 96 mark, we have no real reason to complain. Dead Canary bet range is 0.20 – 100.

Nolimit City slots never lack in features and Dead Canary is another great example. If three to five symbols are aligned diagonally, but no winning combo is made, then the Wild Mining feature is triggered. These matching symbols are then removed and Wilds are added in the empty positions. Depending on your symbol amount, 1 to 3 Wild Bombs are added. Each Wild explosion increases the win multiplier by +1x. Special xBomb symbols explode in a cross pattern, clearing up a good space for other symbols to land in.

For the Dead Canary Free Spins feature, you will need to land 3 scatters, but keep in mind, that these scatters need to be unlocked from their barriers for them to be active. These scatters can either portray gold or silver cages. During Free Spins, the layout is extended with only 4 positions being locked away. These positions are unlocked by xBomb symbols. All scatters start with a 1x and they can collect various modifiers. Silver scatters collect in an x-shape 1 position from itself, while the gold scatter collects in an x-shape from the entire row.

The Bonus game has these modifiers which can affect the canary birds. Here are all the Dead Canary Free Spins bonus modifiers:

Bomb – explode and affect symbols nearby. If scatter is nearby, 1 hitpoint from them is removed. Bombs reset the spin value back to 3

Multiplier – bags of gems, which multiply current scatter values by 2x or 3x

Gas – affect all scatters nearby, removing 1 hitpoint from them

Dwarf – can be collected by one scatter and it adds a 1 hitpoint. Dwarf becomes a persistent collector until the end of its life span, afterwards the bird takes over again

Rat – can be collected by one scatter. It becomes a persistent payer and it shares its collected values with all other scatter until the end of the rat's life

Most of these features can also be purchased for a certain price. 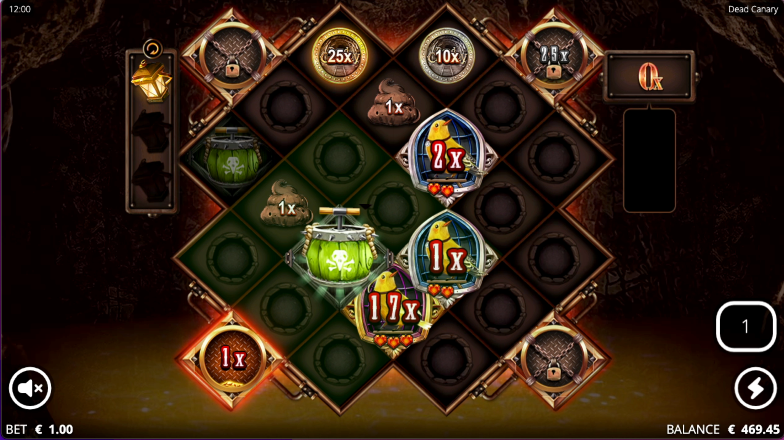 Throughout history, mining has been a tough and often dangerous profession. Most slots though, portray mining as something fun, full of jolly dwarfs and gems and there is nothing wrong with that, as making things more joyous than they are is fine by us, but with all their mining adventures or misadventures, Nolimit City have kept things quite dark and heavy, which is something that players have learned to enjoy. Needless to say that Dead Canary is another fantastic release with a crazy game model and even crazier payouts. It’s full of features so the gameplay is very active with a lot of stuff happening all over the screen. Dead Canary is certainly a slot that you should try.

What is the minimum bet on the Dead Canary slot?

The minimum bet you can make in this slot is 0.20.

How to trigger the Dead Canary Free Spins feature?

To get this bonus, you will need to unlock 3 silver or gold scatter symbols.

What is the RTP on the Dead Canary slot?