While other providers like to show off mining, as something exciting, where you’re looking for gold and gems, in comes Nolimit City with their Misery Mining. Nolimit City aren’t really into positivity and glamour, so a slot named Misery Mining doesn’t surprise us at all. So, what exactly are we mining and why is it so miserable? The answer lies a couple of feet below the earth, where the diligent dwarf chops away the rocks, searching for something nice and shiny. With 70,000x up for grabs, his efforts might just pay off.

The dark humour enthusiasts of Nolimit City have produced many grim slots, so compared to games like True Grit and Tombstone RIP, this Misery Mining slot seems very tame and relaxed. It’s also visually less complex, as more focus is put on the actual gameplay. The headline for Misery Mining is the xBomb feature, which is making its return, this time more volatile and explosive than ever. Those stones won’t break down by themselves, so let’s get to work. 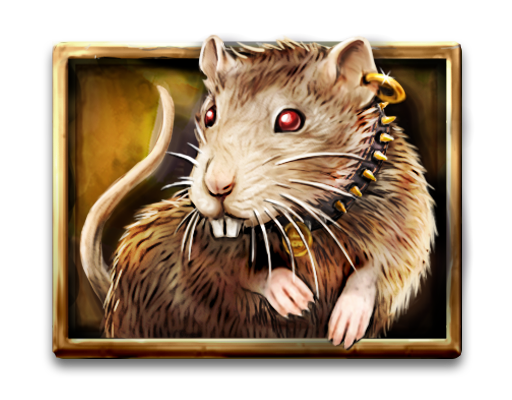 Every spin on Misery Mining begins with a 3x3 layout, which is a limited playing field, but thankfully, each xBomb symbol expands this layout, which can grow up to 7 reels and 7 rows. Starting size ensures 27 paylines, but this number can grow to 823,543 by virtue of Misery Mining bonus features. Interestingly enough, the payouts for 3 of a kind are better on the smaller layout, opposed to when it expands. Of course, on the flip side, if the layout Is larger, the chance to score 6 or 7 symbol combinations become possible. Misery Mining low symbols are 10-A. Symbols like piper, compass, a bottle of whiskey, rat and miner are the premiums.

It's Nolimit City so obviously, payouts are mad, the good mad mind you. Hacking, slashing and blowing up stones can result in a max win of 70,000x! Although we are used to such potentials from Nolimit City, it is still an impressive sight, which a few providers are able to match. This highly volatile action is accompanied by an RTP of 96.09%. You can strike your fortune with a bet range of 0.20 – 100.

The symbols come tumbling down, so each set of winning symbols is replaced by new symbols, dropping right from the top. This also means, that each win triggers a respin and these respins continue as long as there are new wins. To create more space for additional symbols, you’ll need to land the special xBomb symbols, which explode, thus increasing the playing area for the following respins. When no new win is made, the layout returns to the original 3 by 3 size. Altogether this is known as the Collapsing Mine feature.

Misery Free Spins are triggered by 3 scatters or with 1 or 2 Super scatters. Depending on the scatters, the starting layout will be 3x3, 4x4 or 5x5. Before the bonus begins, the player has a choice between Mouse mode or Rat mode. On mouse mode, you will begin with 8, 10 or 12 Free Spins respectively. On Rat mode, you are given 3 spins that reset with each special symbol. During the Misery Mining bonus game, the top row contains various enhancers. An enhancer is activated when a scatter or super scatter lands on the reel below. These are the enhancers that you will find on the Misery Mining slot:

The already mentioned Side and Bottom Collectors are activated by Bombs or Rats. Collectors may interact with other features when they are active. 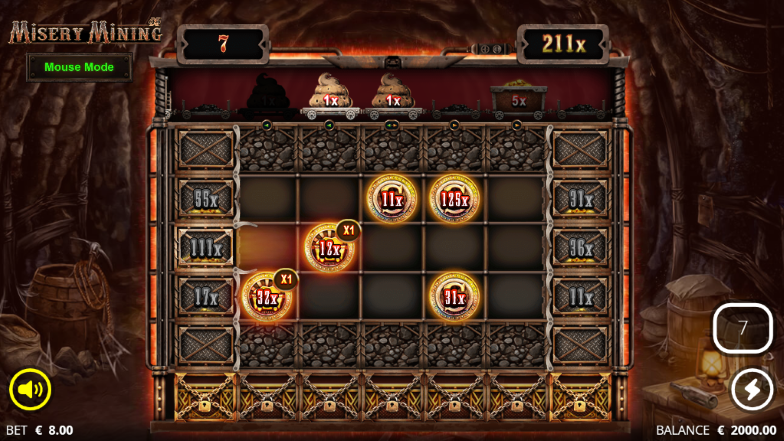 Misery Mining has one of the best gameplay we have seen in a good while. Misery Mining provides constant action, even during the main game. The layout may open up from different directions and additional special symbols are always keeping things interesting. Misery Mining takes a lot from the Fire in the Hole slot, but the gameplay and mechanisms seem quite improved, even though visuals have been simplified. Go on and blow up some reels, that 70,000x is up for grabs.

What is the max win on Misery Mining?

How to play Misery Mining slot for free?

To play this slot for free, use the demo player, which you will find on this page.

How volatile is the Misery Mining slot?

This is a high volatility slot, like all other Nolimit City titles.

The genie can grant your deepest desires. If wealth is one of your wishes then the 10000 Wishes slot has you covered.