Phoenix Town is ruled by a corrupt mayor and his snarly wife. They rule with an iron fist and those who stand in their way or don’t obey their wish get a visit from the ghastly Grim Reaper. Seems like the townsfolk are in a bit of a pickle, so who can save them, you may ask? Their only hope is the Phoenix Wild who will rise above all evil, clearing a path of righteousness with its light. Phoenix Graveyard is a slot with a strong story and atmosphere. It’s a bit dark and twisted but behind the shadows, there is a glimmer of hope, as your efforts could pay off with a 10,000x max win.

ELK Studios is one of the best when it comes to creating unique and special slots with exciting visuals and new theme ideas. Phoenix Graveyard is a gritty slot with an interesting backstory. It’s a true fantasy casino game, so if you’re a fan of mysteries and grimy visuals then Phoenix Graveyard is a slot right up your alley. Of course, compared to some Nolimit City games, the horror element in this slot is almost non-existent but we think that the general public is not really into horror games/slots, so Phoenix Graveyard brings the right dose of creepiness. There is much to see and discover, so let’s get into it.

Phoenix Town is dark, foggy and quite unpleasant. ELK Studios have composed this interesting background music, which combines fantasy with heavy electric guitar riffs, although, after a couple of minutes, this soundtrack became a bit boring. Generally, the Phoenix Graveyard looks well and interesting. We wouldn’t say that it is visually the most impressive slot from ELK Studios, but it’s definitely a strong frontrunner. The default Phoenix Graveyard slot layout consists of 5 reels and 3 rows. 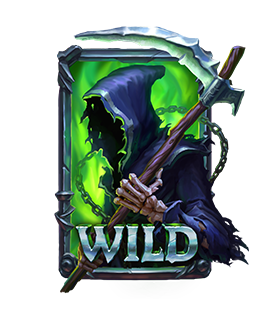 If no bonus features are in play, then the default layout is accompanied by 243 paylines. Of course, this is no simple slot, so potentially, with the available bonus features, paylines for this game can extend up to 1 million. Soon, you will understand how and why. The paytable is pretty straightforward, we have four low/royal symbols of J, Q, K, A, meanwhile high-value symbols are 3 characters – the mayor, his wife and a bard. Of course, the pièce de resistance of this slot is its special symbols, but more on those once we get into all the bonuses of Phoenix Graveyard.

Phoenix Graveyard is all business, no no-sense type of slot. With its high volatility and a 10,000x max win, Phoenix Graveyard can certainly turn some heads. We can’t say that we’re too happy with 95% RTP, but it’s something that ELK Studios have done often, and in combination with all other game elements, the end result is quite alright, so we won’t complain too much. Phoenix Graveyard comes with a rather typical 0.20 – 100 bet range.

During your playing time, some symbol positions may appear with tombstones around them. This effect is called the Sudden Death. Symbols inside this area will be randomly sliced, creating multiple symbols in a place of one, thus creating more winning ways.

There are two Wild symbols on Phoenix Graveyard. Both of these Wilds have a distinctive look and they have different functions throughout the game:

• Phoenix Wild – the rising phoenix jumps to different game positions during Respins and Free Spins
• Grim Reaper – the menacing Grim Reaper is a walking wild, that triggers respins, slicing all high symbols that stand in its way

If both of these Wilds are adjacent a Battle is triggered. During this battle, both Wilds interact with each other, doubling multipliers and leaving additional wilds behind, as a result of their mighty scrap.

Phoenix Town can only be saved by the Phoenix itself, so to start saving everyone, you need to land 3-5 Bonus symbols, which lead straight to the Phoenix Graveyard Bonus Game. For 3, 4 or 5 scatters you will be rewarded 6, 8 or 10 Free Spins respectively. Additionally, depending on the bonus symbols amount, you will get 1, 2 or 3 active Phoenix Wilds. During Free Spins, these Phoenix Wilds jump all across the game layout, expanding ways to win on the symbols they land. These Phoenixes are active throughout the whole bonus game.

With the ELK Studios X-iter mechanism, players can purchase and trigger all Phoenix Graveyard bonuses and features, for a reasonable sum of course. For example, Sudden Death will cost 10x of your bet, while Battle and regular Bonus Game cost 25x and 100x. 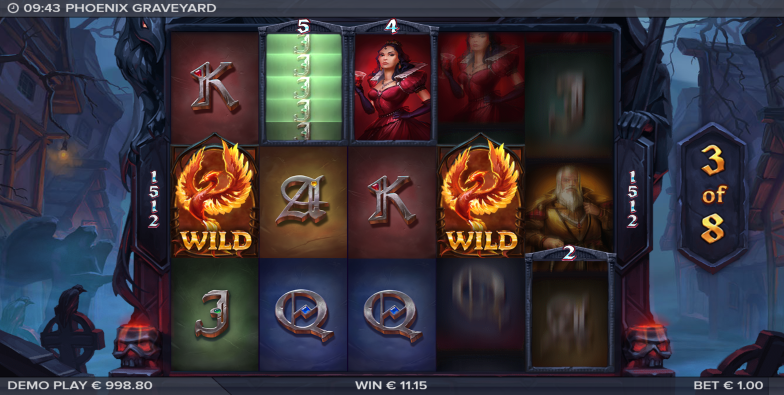 ELK Studios aren’t really known for their grittiness or darkness when it comes to the way slots look, but they have been able to produce some creepy/spooky elements. Still, we don’t think this type of presentation fits them well, so we aren’t the biggest fans of this picture. The gameplay itself is quite fun and it gets especially satisfying when you begin to slash up multiple symbols, so with every next spin the chance for better wins increases. Phoenix Graveyard certainly has a game model that’s worth a try.

Which other ELK Studios slots can I play on SixSlots?

On SixSlots you can find many popular ELK Studios slots, we recommend having a look at Illogicool, Fate of Fortune, Nitropolis 3 and Diablo Reels.

How volatile is the Phoenix Graveyard slot?

This slot has a high volatility setting.

What is the max win on the Phoenix Graveyard slot?