Play for money at Nightrush

The original Mega Moolah slot has gone done in history as one of the most iconic online casino games. It was released way back in 2006 when online casinos just started to make their presence known. Mega Moolah holds the Guinness Record for having the biggest online jackpot win. Many years have passed but players still love it and play it every day. Now in 2021, a new Mega Moolah Goddess slot remake has been introduced. Without a doubt it has some big shoes to fill, but is it even possible, taking into consideration how much of a cult hit is Mega Moolah? Only one way to find out.

Microgaming have abandoned the wild safari. They have set their eyes on Ancient Egypt, which is not that exciting because we got more than a few Egyptian slots at our disposal. Mega Moolah Goddess is a remake of what once was the Mega Moolah Isis/Goddess slot, dedicated to the Egyptian goddess. In between these two, there have been plenty of other Mega Moolah slots such as Summertime, Atlantean Treasures and most notably the Fortunium Gold. Even though the Ancient Egypt theme is a bit boring for some, it still has a large following so the new Mega Moolah Goddess might very well be the next hit. Microgaming may have felt that the original Mega Moolah Goddess didn’t do well enough. Perhaps it was due to the confusing name change, perhaps it was due to some other factors. Whatever the case, we have received a newly improved version, that boosts the graphical quality and some of the payout stats. The layout still is with 5 reels and 3 rows, so no revolutionary changes here. Mega Moolah Goddess is quite simple looking, but the game was initially released in 2009, so no surprise why that is the case. 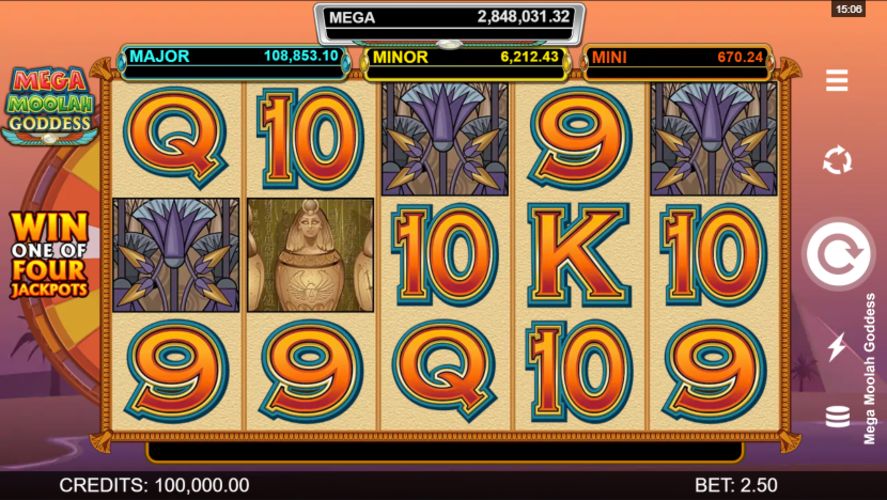 Perhaps the biggest change comes to payout stats. Mega Moolah Goddess no longer is a medium volatility game with an RTP of 88%. These stats have been bumped up, now offering players high volatility with a much more decent 93.30% RTP. By modern standards, this still is on the low side, but it’s also much better compared to what we had before. The default non-jackpot max win was 3612x, but we are yet to see if the new Mega Moolah Goddess keeps this potential. The bet range is 0.25 – 25.

Classic slot games have never stood out for elaborate bonus features, but that doesn’t mean that the simple ones are not able to provide good payouts, quite the opposite Mega Moolah slots are legendary for their wins. Mega Moolah Goddess Free Spins are triggered by scatter symbols. 3 scatters provide 20 Free Spins, 4 scatters provide 25 spins and 5 scatters provide 30 spins, with a possibility of a retrigger. The fixed 6x multiplier will help you with making some profit.

Obviously, Mega Moolah Goddess is all about that jackpot. There are four different Progressive Jackpots. Each of them starts with a certain value.

These life-changing jackpot can trigger at absolutely any moment. So you could be making just a couple of spins and suddenly, you are on your way to become a millionaire. The larger bets you make, the bigger is the possibility that you will trigger one of the Mega Moolah Goddess Jackpots.

It’s great to see how Microgaming are remaking some of their most iconic titles. Original Mega Moolah has solidified its place in the iGaming Hall of Fame, so any new game that bears the Mega Moolah title carries a lot of expectations. Mega Moolah Goddess is a pleasant remake. It would seem unfair to put it above the original Mega Moolah, but it definitely is THE Mega Moolah slot to play in 2021 and beyond. We can’t wait to see what kind of jackpot wins our readers will score, perhaps you will be the one who breaks the record.

Dear reader, you are invited to join the illustrious detective duo of Holmes and Watson, for their spectacular chase throughout Victorian London