Do you know how they say that at the end of every rainbow there is a gold pot? Well, it’s time to once again seek these treasures. Microgaming partner studio Just For The Win wants to bring us to the green Irish hills where life simple and merry. Slot players have been treated with some great Lucky Irish/Leprechaun slots in the past, so it’s going to be tough to beat everyone who came before, but nonetheless, Emerald Gold will try its best.

There is something about that Irish spirit, that just gets you dancing. We all want a share of that Leprechauns treasure, but finding it is not always so easy. Just For The Win is one of those providers to look out for, in a way that they are gradually making a name for themselves. A lot of you have probably heard of the Rockabilly Wolves and Western Gold. Emerald Gold is capable of paying out 25,000x, which is quite a number for what is seemingly such a jolly slot.

Play Just For The Win Slots for Real Money A lot is happening in front of you once you open up the Emerald Gold game, so we will have to go step by step. In the background, we see a picturesque scene of green Irish hills. The majority of the screen is the blue skies so a rather simple presentation. All the UI buttons are covered with gold, as well as the game layout, which shines in the middle of it all. You can also spot the Emerald Gold logo with the max payout glimmering underneath. Next to that, we see a certain reel which indicates some values. No worries, we will explain that in a bit. Speaking of presentation, let’s not forget the merry background music which really puts you in the proper spirit. 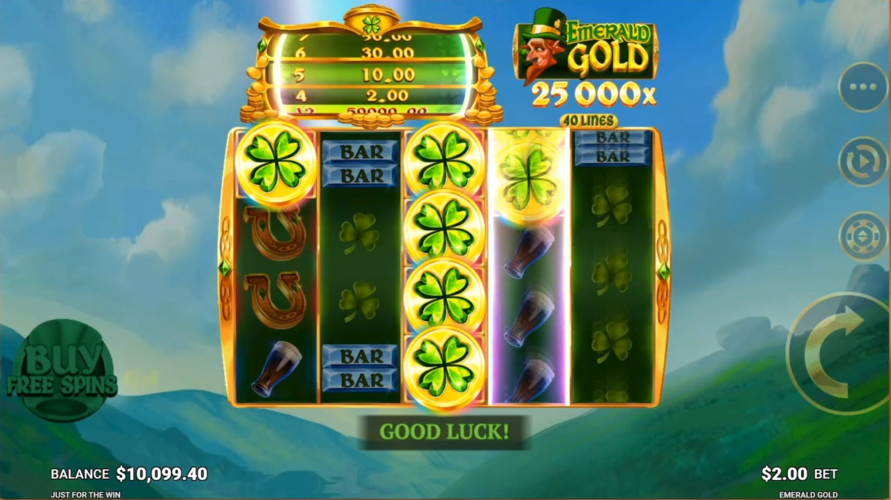 Even though the Emerald Gold game layouts seems a bit peculiar, we are still looking at 5 reels and 4 rows. There are 40 paylines on this slot. The full lineup of the symbols is following – clover, a pint of beer, ring, horseshoe and single, double, triple bar symbols. Two symbols with the highest value are triple seven and “W” wild. Visually, these symbols are a bit lack-lustre, perhaps it’s because a large portion of symbols are the same looking bar symbol. Instead, we could have had some additional elements of the Irish culture, but no use in crying over spilt milk.

The merry atmosphere is somewhat deceiving to be honest, in a way that Emerald Gold is actually quite a gritty slot. The volatility has been cranked up to maximum and, as we made it clear, the max payout is also no joke, reaching up to 25,000x. All in all, Emerald Gold is a high potential slot, so thrill-seekers will surely find it up to the standard. The RTP of 96.04% falls in the average range. Emerald Gold comes with a decent 35.81% hit rate, meaning that pretty much every 3rd spin is a winning one. The journey to green pastures can be experienced on all devices with bet ranging from 0.20 to 10 EUR/GBP.

Three golden hats will trigger the Emerald Gold Free Spins feature. The initial spin amount is just 3, but they are re-set each time you land a scatter symbol. Collected scatters are paid out after the bonus ends, so it Is much easier to collect huge amounts, compared to the base game, where the count resets between spins. Emerald Gold also offers the chance to buy the bonus. The price for that is 52x.

We have experienced plenty of Irish themed slots, but still Emerald Gold offers a fresh perspective. It’s perhaps a bit strange, how scatters now have a whole different meaning, but Just For The Win are trying out something different and that is great to see. We can’t also dismiss, that Emerald Gold provides a strong winning potential. The visuals are okay, nothing too spectacular, but combined with the game model, we receive and interesting game.

Stormcraft Studios have switched up the style for this release. Fire Forge comes with a jaw-dropping 50,000x max payout.

Legendary Starburst is back with a brand new look and new exciting features. Experience the nostalgic trip with a ridiculous 200,000x payout!