After NetEnt released Gods of Gold, they were awfully quiet with the new Infinireels mechanism. For a moment, we actually forgot that such feature mechanism even exists. But then, seemingly out of thin air, the torch has been passed to Red Tiger. The game that receives an overhaul is the popular Dragon’s Fire slot. Beforehand, we also got a Megaways version, so in total, we have 3 variants of the game. To be fair, we are actually quite excited to see that the highly anticipated Infinireels mechanism just didn’t die out, instead, it lives on, trough the fires of a dragon.

Probably, the main comparison should be between the Dragon’s Fire Megaways version and Infinireels version, to see which remake is more worthwhile. There have been a couple of significant changes as well as some things that have stayed pretty much the same. Most notably, we have received a completely new game layout, which might come with some mixed first reactions, but don’t worry, we will do our best to explain things, so you can truly understand if this new instalment is just for you. A lot of times, when Red Tiger remake their slots into Megaways version, there minor or almost none visual differences. With Dragon’s Fire Infinireels the story is much different as the most noticeable change is the 3 x 3 game layout opposed to the 6 x 7 that we got before. In general, a lot of players tend to dislike any 3 x 3 slots, but you have to remember that due to Infinireels, the game layout can greatly extend, so don’t get discouraged by the default set up. The visual presentation has greatly improved. Everything is much more vibrant and smoother. In general, everything just looks and feels much nicer.

Dragon’s Fire Infinireels symbols still portray the same object as before, although this time the quality is a bit better. The smaller game layout usually requires more detailed symbols, so this only makes sense. Again, low symbols are four differently coloured and shaped eggs, while high symbols are four dragons plus the dragon’s eye. The whole Infinireels mechanism is quite simple actually. New reels will be added as long as you score new wins. So in some ways, it is similar to the more known tumble mechanism, where each win brings new symbols. As the name suggests, there is an infinite amount of reels you can get during a single spin.

Dragon’s Fire Infinireels comes with some familiar, but pleasant bonus features. Fire Wilds which was previously known as Fire Blast makes its return. This feature can trigger during any random spin. A random reel will catch fire and some wild symbols will be added.

The Dragon’s Egg has seen some bigger changes, as no longer it’s situated beside the game reels, now it is a separate symbol, which can land with any random multiplier. Only one per spin can land. It is also now called the Fire Egg. 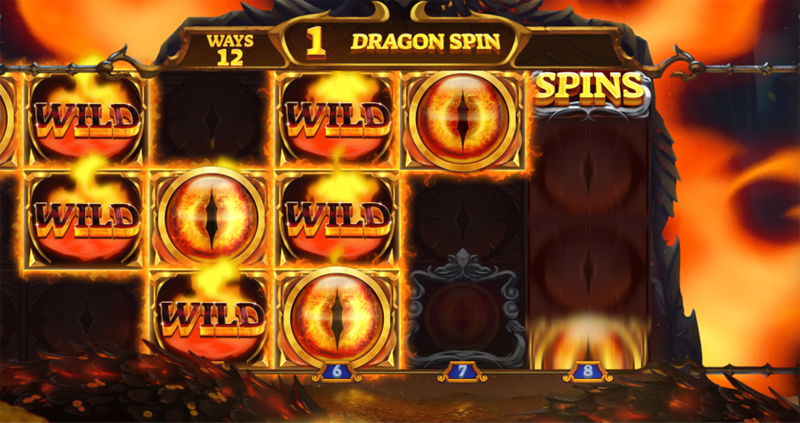 Dragon Spins are triggered by 3 scatter symbols. The initial award is 8 Free Spins, but more can be gained during bonus game by landing the +2 spins symbol. These bonus spins also are pretty straightforward. One random regular symbol will be chosen before Free Spins begin. Afterwards, only this symbol will appear, plus the additional wilds and Fire Eggs. During Free Spins the Infinireels feature won’t reset itself between spins.

You can find yourself wondering, do you really need to remake the same game twice? In this case, yes you do. Dragon’s Fire Infinireels has been a saving grace for this game mechanism. It’s an improvement if we compare it to the Megaways version as well because mostly all game aspects have been improved, starting from visuals to payouts. Perhaps this slot will spark up a new wave of Infinireels slots, which we hope is the case.

What exactly are we mining and why is it so miserable? The answer lies a couple of feet below the earth where the diligent dwarf mines away.