Cyberslot Megaclusters is an upcoming slot from Big Time Gaming. It is the second game in the Megaclusters series, coming behind the release of Star Cluster Megaclusters slot. BTG is looking to explore this new format even further, as the predecessor was received with very positive reviews. Once again we are presented with a sci-fi’ish type of theme, which Big Time Gaming use quite frequently. Each release from BTG is quite a big event in the casino community, so naturally, the expectations increase as well.

BTG has never been a stagnant studio, as they constantly look for new ways to revolutionize slot gaming. They did it with Megaways™ and now they want to do the same with Megaclusters™. Cyberslot Megaclusters uses 3 reels and 9 row set up, but of course, due to Megaclusters, these reels don’t work in the traditional way. Same can also be said about paylines, which are replaced by cluster pays. Cyberslot Megaclusters has some big shoes to fill, so let’s see how it stacks up against the greats. Ever since Starbust hit the scene in 2013, we’ve seen more and more slots use this stary space theme as their go-to choice. BTG, in general, are fond of this theme, as it is seen once more on Cyberslot Megaclusters. Synth soundtrack will keep the rhythm while you spin away. The name slightly gives it away, as Cyberslot Megaclusters visuals seem to be inspired by the Cyberpunk style, with purple and blue colours being the dominant ones. There is nothing much else to look at, but that’s how it has always been with these game, visuals are clearly not the focus. 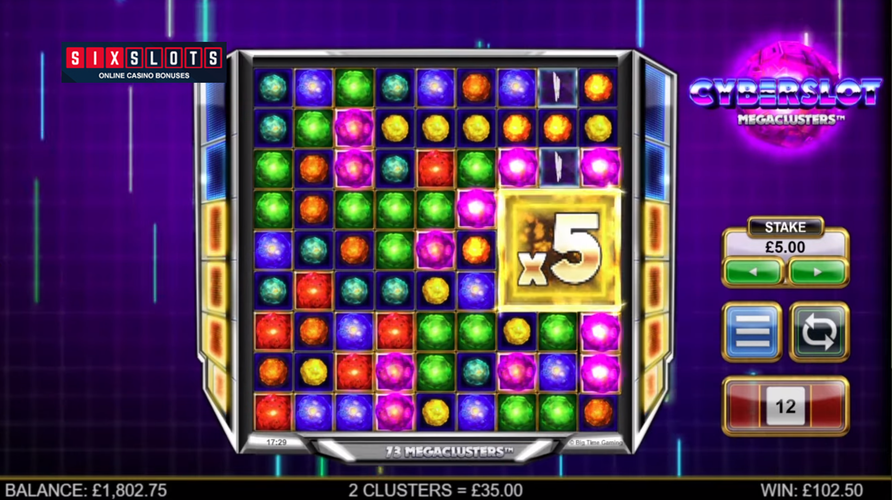 Cyberslot Megaclusters is packed with outer planetary objects and crystals, that shine in all spectrum of colours. These 7 symbols are split up in 3 value tiers, with the highest tier having 3 symbols. You will be able to see these symbols in a larger and smaller form. Additionally to these symbols, Cyberslot Megaclusters come with 3 wild symbols. Winning combinations are made up from clusters of symbols, as opposed to forming regular paylines.

Cyberslot Megaclusters payout stats are quite similar to the ones on Star Cluster, but they are not the same. First of all, the volatility has been increased, but the RTP has been slightly dropped. Not by much, just 0.18%, which shouldn’t cause a noticeable difference. One thing that has stayed unchanged is the bet range, which still is 0.20 – 20. For Cyberslot Megaclusters the max win potential hasn’t been revealed yet, but by the looks of things, and knowing BTG, we have no reason to believe, that this number will fall below 20,000x, so don’t worry, your efforts will pay off.

The base game feature is the Megaclusters mechanism which works the following way. Winning clusters are made up of 5+ symbols, which then split up in 9 smaller ones. Just like with tumble, winning symbols disappear and then are replaced with new ones. Most of us already had the taste of this on Star Clusters Megaclusters. Roaming Wild is another feature that is present during the base game, more precisely, it is present on every spin. Every time this wild is involved in a winning combination the multiplier for it increases by one. Just like a Jammin Jar this wild hops around the reels.

Cyberslot Megaclusters has thrown away scatters or bonus symbols, instead, Free Spins are triggered by 12 consecutive reactions. The award for this accomplishment is 6 Free Spins. There is a way to increase the spin amount as for every tenth wild multiplier, game awards extra 2 spins. The multiplier of the wild caries over from to base game to bonus game. Also, a Rainbow Wild makes its appearance during Free Spins which then can multiply with the regular Roaming Wild creating even more insane multiplier combos.

To be honest we rarely get bad games from Big Time Gaming. This is a provider that doesn’t release recycled content every month, like some providers, that we won’t name do. We can already see all the crazy highlights that players on Cyberslot Megaclusters will have. This is the game that pays for the commitment as the bonus game requires you to put in some actual time, it’s no one spin wonder, so don’t also expect to get a quick money grab. For some, the stary space theme might not be the fondest one, personally, this is not one of my favourites, but the gameplay part is solid and that matters the most. With all being said, we can’t wait for the actual release of Cyberslot Megaclusters, as it will be interesting to see this game in proper action.

Take your crypto wins to the moon! NFT Megaways is the first of its kind, themed around the pixelated world of crypto wonders.