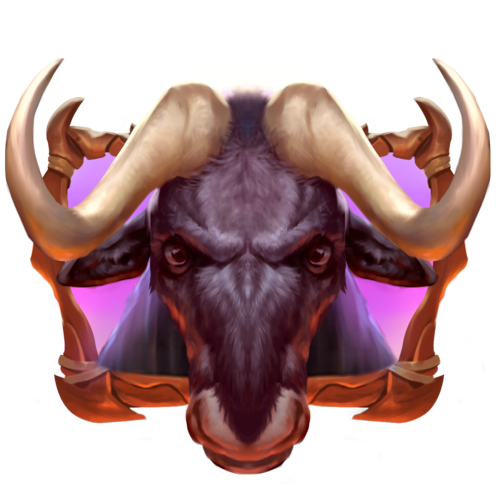 It feels like a while since we had a good safari slot, Play’n GO seems to think the same as they have released the brand-new Win-a-Beest slot, which takes place in the wild plains of Africa. On this occasion, the lion is not the king anymore, as the wildebeest takes the spotlight. P.S. good wordplay.

Play’n GO has been busy, as they lately have been releasing more and more slots with shorter time gaps between games, including Nyjah Huston – Skate for Gold and Cat Wilde and the Doom of Dead. Arguably this may affect the slot quality, as lesser time is spent on the development, but Win-a-Beest creates positive first impressions, and Play’n GO rarely disappoints, so with fingers crossed, lets jump right into the wild African adventure. The slot greets the players with a deep voice pronouncing the name on the game. After that, the main game layout appears, and it is straight away it’s visible that this is not a textbook layout. Win-a-Beest consists of 5 reels. Full 5 rows are only available during bonus features, so during the main game, we have 2 full Rows and 2 two half-finished ones. 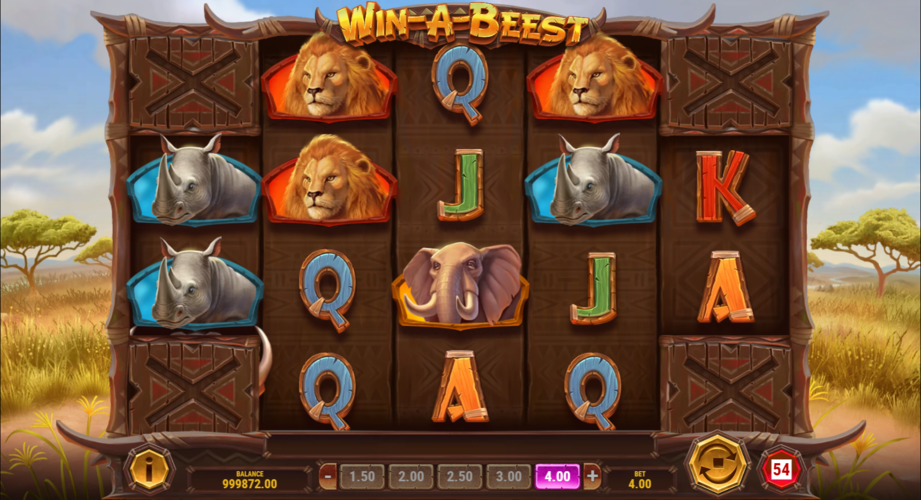 We are located somewhere in the plains of Africa, some trees are visible in the background, and tall grass covers the whole horizon, perhaps some wins are hiding here already. Graphically Win-a-Beest is a gorgeous slot - it feels very adventurous, and it doesn’t seem like a rushed project at all. There is a room for improvement as Win-a-Beest feels ‘’choppy’’ at some points, but we may just write it off on the game being still in progress.

To perhaps clear some confusion and explain things better, Win-a-Beest starts off with 256 paylines. It is a limitation, due to four of the fields being blocked. During bonus features, game layout fully unlocks, and paylines increase to 1024, which in return creates a bigger chance to score wins. But to do so, we need to match symbols that are adjacent to each other from left to right. 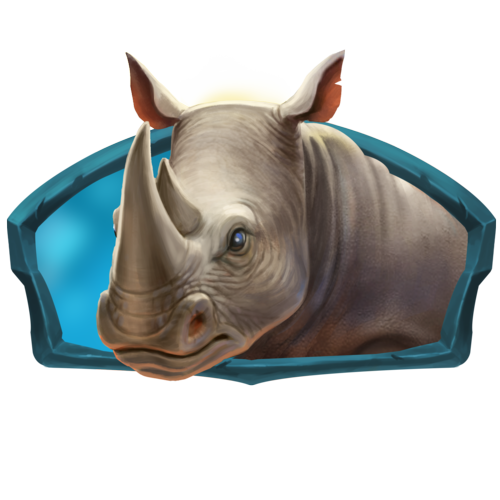 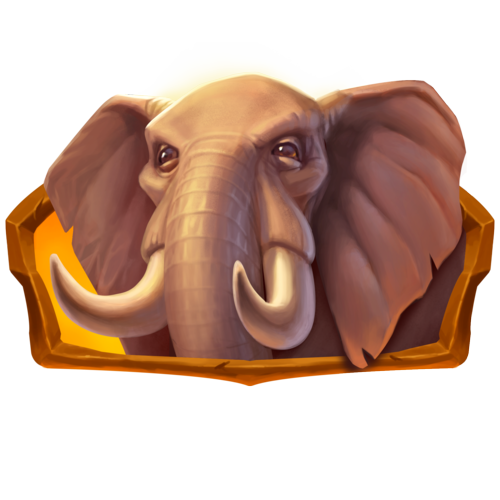 Win-a-Beest beautiful visuals also extend to symbols. Four lowest are wooden royals, which are styled fittingly to the safari theme. Supreme symbols take a form of wildlife animals like leopard, rhino, lion, and elephant. In total, that makes it 8 regular symbols. The special category includes Wilds that also come with multipliers, Scatters, that lead to Free Spins, and the Win-a-Beest symbol, which is the main Beest Mode feature symbol.

Win-a-Beest RTP is 96.12%, with the volatility being medium, which makes the math model rather moderate by previous standards. With the help of bonus features, Win-a-Beest max win can spark up to 10,240x, which by no means is a poor rating. Bets are standard ranging from 0.10 – 100EUR per spin. Some stats might change, depending on the casino you are playing on, so be sure to look this over before you begin to play.

You wouldn’t expect wildebeests to be too aggressive, but the ones on Win-a-Beest are just that. They are bringing in some charging bonus features that really show the true power of a beast.

A feature called Beest Mode triggers randomly so you could get it on any spin. In this mode, only high paying Win-a-Beest symbols, Wilds, and Scatters can land. 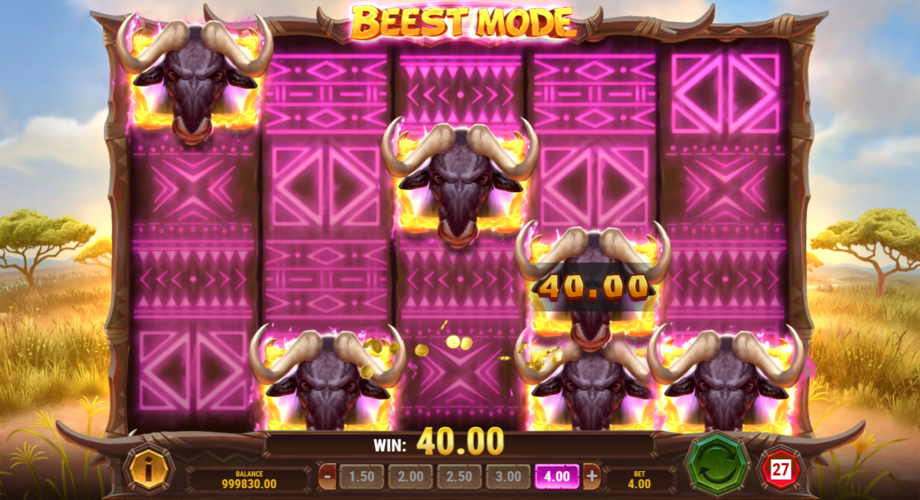 If you manage to hit 3 or more scatters, then you are awarded the Beest Mode Spins. They work the same way as the randomly triggered Beest Mode, but instead of one spin, you get 4 spins for 3 scatters, 6 spins for 4 scatters, and 8 spins for 5 scatters. There is also no limit on how many Beest Mode re-triggers you can land. Also, the grid is fully expanded, with 1024 paylines. 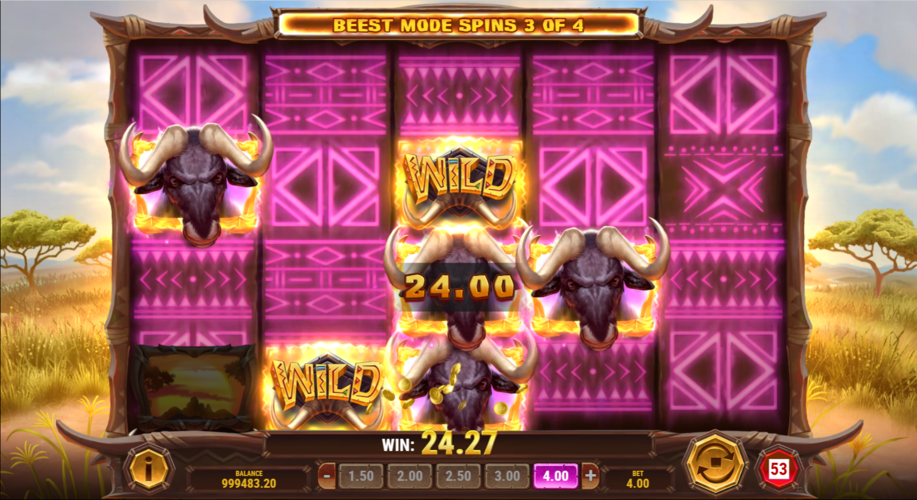 The other prominent feature on Win-a-Beest is Stampeding Spins or just Free Spins. These are acquired during the main game by the same scatter symbols. The reward for 3-4-5 scatters is 8-12-20 Free spins. Just as before, the slot grid is fully unlocked to 1024 paylines. There is also a chance to score Beest Mode Spins during the Stampede Spins and vice versa as the frequency is increased.

For a medium volatility slot, Win-a-Beest slot packs a serious punch. The overall pacing of the game beautifully captures the essence of the wildebeest packed stampede. Also worth mentioning that the visual effects are great, and the overall execution of the slot is almost flawless. There are small improvements that could be made, but from the latest Play’n GO products, Win-a-Beest brings one of the strongest displays.

Evoplay are taking it to the next level. Treasure Mania is a fully 3D western style slot, which involves trains, robbery, goblins and chickens.