Play for money at StayCasino

There once was a period when all punters were mesmerized by the gold rush that came from the Wild Falls slot. Those were some good times, and we are happy to say, that Play’n GO are revisiting this once-beloved game as the new Wild Falls 2 slot is released. Head on back to the Yukon River and search for those golden nuggets. The miner and the donkey are back, once again looking for treasures. Will you join these two adventurers?

The original Wild Falls has released a good while back ago, but even to this day, many players are enjoying its gameplay. Now with Wild Falls 2 coming out, that portion of players will be able to switch to something with better graphics, better payouts and just generally a better gameplay model, or so we hope at least. We are quite excited to get started, to come along, we have some gold to find! The great banjo tunes are back again, and it really makes us smile. It brings back some good memories from the previous slot and in general, this soundtrack just adds some positivity to the day. Just like before, Wild Falls 2 uses 5 reels and 3 to 5 rows, which depends on the triggering features. The graphics have been greatly improved and although we get the same scenery of the river and grasslands, the game looks much nicer. Just like before, the symbols come rushing down from the river, plunging below into the pond. We really enjoyed that effect before and we’re enjoying it again in the Wild Falls 2 slot.

River comes bearing many attractive symbols. The most basic of them are the low symbols of 10, J, Q, K and A. Play’n GO have changed up the high symbols a bit, as now they are made up of a lantern, spades, donkey and the miner. The default layout brings 20 paylines, but due to some features, this number can go up to 40. The top stake for five a kind of premiums is 25x.

Like always, when we get a direct sequel, we love to do some comparing, so let’s compare the payouts of both Wild Falls slots. Play’n GO have kept the high volatility, but they have nudged up the max potential. From 10,000x, the max win now is 15,000x, so definitely a significant change. The RTP on the other hand has marginally dropped from 96.50% to 96.20%, so not a huge deal all things considered. The regular Play’n GO bet range is kept, and the gameplay feels familiar as well.

Some features that made the original Wild Falls popular are now back on Wild Falls 2, with some improvements. Chests once again are the symbols to look out for. They serve both as Wilds and Scatters. When 1 or 2 chests drop, they trigger Rapid Re-spins with extended reels. Chests are locked in place as the river drops in new symbols. If during this sequence 3 chests are combined, then the Free Spins feature is triggered.

Gold Rush is another beloved feature which can trigger randomly at any point in the game. This rush of gold turns any active chests into golden chests, while also carrying a random multiplier value of 2x, 3x, 4x or 5x. Multipliers for chests are individual, so in total, this multiplier can go up to a maximum of 125x.

Back to Wild Falls 2 River of Gold Free Spins. Chests, that triggered the feature, are locked, and they move one position down on each spin, much like it was on the original Wild Falls slot. As the river moves, there is a chance to land additional chests. As long as there are chests on the screen, the feature is alive. Once all chests drop off, the Free Spins features comes to an end. If Free Spins are triggered with golden chests, then the Super River of Free Spins bonus variant is awarded. Here all chests produce an extra multiplier with each step down they make. 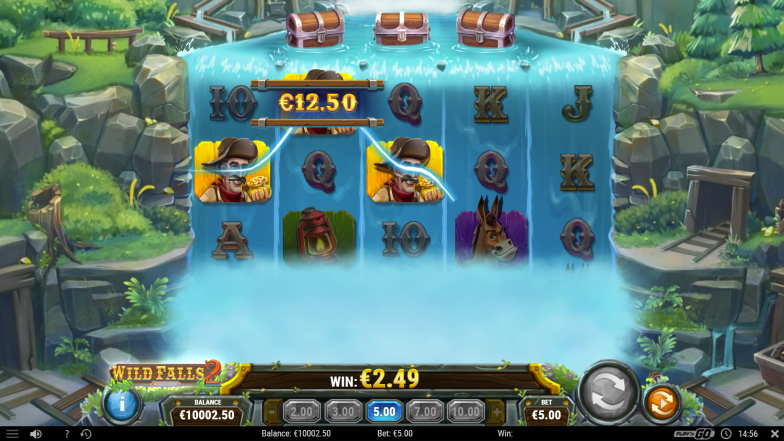 We have fond memories of the Wild Falls slot and the sequel did not ruin them. This seems like a very successful sequel, as it improves this game in almost every aspect. Most importantly, we still get that fun gameplay which revolves around this whole flowing river idea, but now the payouts are better and the game looks more appealing. To be honest, there isn’t anything particularly bad we can say about this game. It’s like the original Wild Falls, just improved, it’s that simple. Gold luck gold miners!

What is the minimum bet on the Wild Falls 2 slot?

Yes, Play’n GO have optimized this slot for mobile devices.

How to play Wild Falls 2 for free?

You can play Wild Falls 2 for free, once the official demo version is published.

Neon skies and futuristic vibes, this slot pulls you into a night of colours. Explore unique “New Ways to Win”.