Embrace the nature and the abundance of paylines in the Wolf Power Megaways slot. Not too long ago we had the pleasure to play through the regular Wolf Power slot, which we did enjoy quite a bit. Playson have produced many of these simple hold and win slots and quite often they also decide to remake them with Megaways. If there’s a provider that knows their way around Megaways, it’s certainly Playson. They have relentlessly brought us many wonderful releases, so we’re sure that Wolf Power Megaways has what it takes to capture the interest of many new players.

The sceneries and other game visuals have seen absolutely no change. This is always the case with Playson Megaways remakes, so can’t say that we’re disappointed as we just didn’t expect anything else. It still is the beautiful blue mountain range, so we’re not too mad at seeing this presentation coming back. Of course, the layout has been greatly extended due to Megaways, so now we got 6 reels and 2-5 rows depending on the changing size of symbols. The game runs well, just like any other Playson slot.

If this is your first experience with Wolf Power, then let us introduce the game symbols to you. The low symbols of this game are J, Q, K and A. With much larger payout values follow an owl, a ram, an eagle and a bear. The mighty wolf is the Wild symbol which is far ahead of the most valuable animal of this game. Wolf Power Megaways has no tumble mechanism, so winning symbols do not disperse the same way they do on a lot of other Megaways titles.

We know a lot of you are interested to find out, how does this new Megaways slot compare to the original Wolf Power payouts. Changes are almost drastic, as we go from 1,500x max win to 20,000x. This change alone will bring over a large number of players from the original game to the new one. The RTP is also improved, going from 95% to 96%. With all these changes, Playson have also increased the volatility, so the new Wolf Power is a lot more explosive.

Scorching energy balls are the Bonus symbols while the howling wolf is the power symbol. Both of these symbols are extremely important if you wish to maximize your winning potential. A combination of 6 or more Bonus/Power symbols will trigger the Bonus Game. During this feature only these two symbols may appear and any instances of them will stick to the reels for the entirety of the feature. Bonus symbols contain a value ranging from 1x to 10x. Wolf Power Bonus Game begins with 3 respins, which reset every time you land a new special symbol, the same way it is on hold and win slots.

Another special symbol, exclusive to Wolf Power Megaways is the Reel Booster symbol. The booster symbol increases the size of the reel by one cell, while additionally adding a +1x multiplier to the reel it landed on. The maximum reel cell height is 6. Power symbols reward bigger payouts, as for six Power symbols you get 2,000x. For a price of 100x, the Bonus Game can be purchased straight away. 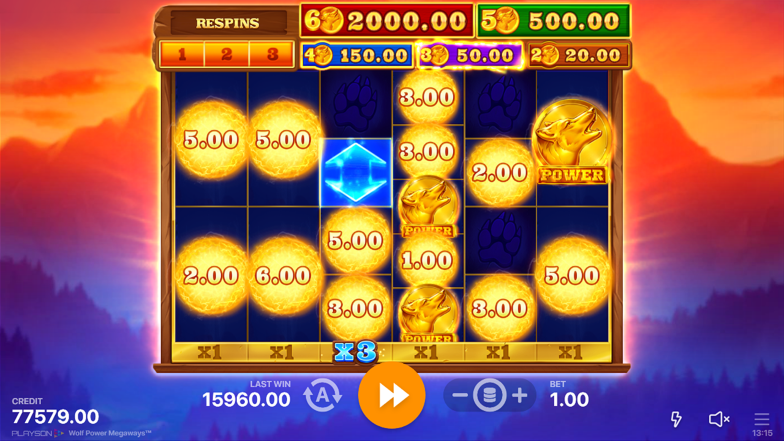 Wolf Power Megaways Bonus Game already sounds tempting on its own, but this game also offers some Free Spins. Mountain peak by the moon is the scatter and you need at least 3 of them to trigger the Free Spins feature. For 3, 4, 5 or 6 scatters you will be rewarded 10, 15, 20 or 25 Free Spins. During Free Spins all Wild symbols expand to fully cover the whole reel. 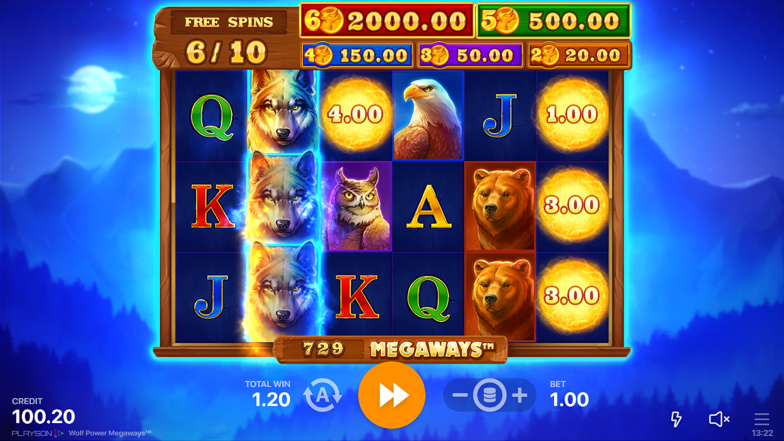 The conclusion for this slot is rather straightforward. If you liked the original Wolf Power slot, or you’re a fan of other hold and win slots from Playson, then Wolf Power Megaways could be the perfect choice for you. It’s just bigger and better Wolf Power with more opportunities and things to do. We still would recommend giving the original Wolf Power a shot, but with a Megaways version around, we believe that players will jump straight onto this one.

The official release date for this slot is the 17th of February 2022.

How to get Wolf Power Megaways Free Spins?

The Free Spins feature is triggered by 3 or more scatter symbols.