You think Vikings will ever stop plundering? We don’t think so, but when it comes to video slots, we’re glad for it, because we get games like Volatile Vikings 2 Dream Drop. This casino game is a follow-up to the original Volatile Vikings slot, that was released by Relax Gaming less than a year ago. The original game was a real Viking thriller, producing some proper Nordic atmosphere which still lingers in our minds. That’s why we’re glad that Relax Gaming have decided to release part two, which will hopefully retain that fighting spirit.

Volatile Vikings 2 is a Dream Drop slot. This means that it’s the third Relax Gaming slot that uses this jackpot network. Jackpot hunters have a reason to smile, another promising game is joining their portfolio. By the looks of things, Volatile Vikings 2 Dream Drop is a fantastic Viking fantasy slot with cool features and an attractive presentation. We very much enjoyed the original Volatile Vikings slot, so the question is, have Relax Gaming produced even something better?

From the icy shores of Scandinavia, we are taken to a rather cosy tower with two round windows. We can also see some tankards, wooden tables and chests of gold, brought in from the recent pillaging. To us, Volatile Vikings feels more like a fantasy slot than an authentic Viking game. This game is gorgeous, and we don’t mind the change of scenery, we actually welcome it. Once again, Relax Gaming have provided a nice soundtrack that puts you in the proper mood. We have stated before, that Relax Gaming have phenomenal graphical skills, which is displayed again on Volatile Vikings 2.

The symbols on Volatile Vikings 2 are similar, but not the same. The new ones are a bit slimmer and more polished, the previous ones were quite blocky and big, but the faces of the characters and colours remain the same. Low symbols are still crafted runes, so Volatile Vikings 2 brings back some pleasant memories, although it changes up enough to feel fresh and new. Sometimes it’s hard to find the right balance but seems like this time Relax Gaming have done it.

The layout on Volatile Vikings 2 consists of 6 reels and 5 rows. Just like the first Volatile Vikings slot, instead of paylines, we have Scatter Pays, so you’ll need to match at least 8 symbols anywhere on the reels. Of course, volatility is high, otherwise, this game wouldn’t make much sense. The big change-up is the RTP. The default RTP is a rather low 94.80%, but that’s because 12% is reserved for jackpots. This is very usual for Dream Drop slots. The best non-jackpot win is 10,000x, but the jackpot payout can even reach 10 million euros. Volatile Vikings 2 does not mess around it seems.

On every spin, you will be given two Multiplier Reveal symbols which land on reels 3 and 4. These symbols come with an added counter and multiplier. After each cascade, the value on the counter drops by one. Once the counter ends, the provided multiplier is activated, while destroying any adjacent symbols.

The best winning experience though comes from Free Spins. By landing 3 scatters, you will be given 6 Free Spins. Every additional scatter adds a +1 spin. The big change-up in Free Spins is the way that Multiplier Reveal works. The multiplier is persistent and it’s applied to wins at the end of each spin.

Dream Drop is a Volatile Vikings 2 feature that triggers randomly. It brings in a new layout with 5 reels and jackpots listed above them. During this feature, only special crate and DD symbols may land. DD symbols remain sticky while crates are destroyed in the process. The moment you fill reels with these DD symbols, a corresponding jackpot prize is awarded. Jackpot starting values are 1, 5, 100, 25 000 and 500 000 Euros for Rapid, Midi, Maxi, Major and Mega jackpots respectively. 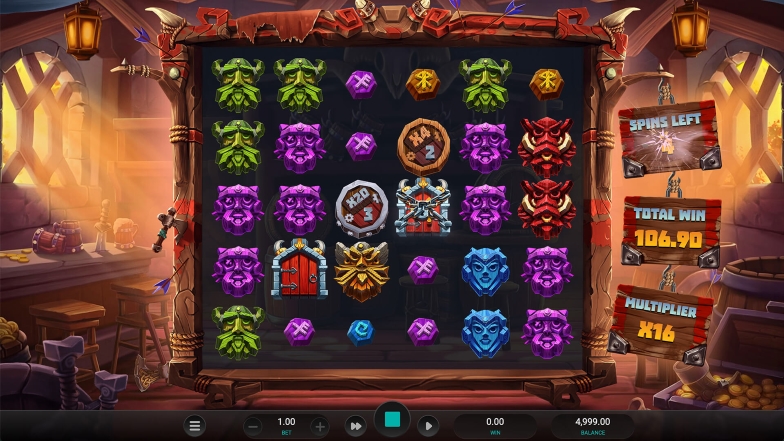 The first Volatile Vikings was a rather special game. It used a typical Viking theme, but the presentation felt quite unique. Volatile Vikings 2 takes a more regular fantasy stand, which is fine, it’s just not that memorable. The potential and features are once again here, but Volatile Vikings 2 seems to tone it down a bit. It’s still a great casino game, but it’s hard to say if it really matches the original title. Without jackpot, we would be sceptical, but Volatile Vikings 2 brings a wonderful Dream Drops opportunity, which is perfect for those who are chasing down jackpot payouts.

When is Volatile Vikings 2 available in online casinos?

The official release date for Volatile Vikings 2 is the 20th of July 2022.

What is the max bet on Volatile Vikings 2?

Can I play Volatile Vikings 2 for free?

Yes, you can play this slot for free, once the official demo version is available.

What’s scarier than an avalanche? Monster Superlanche, of course, and it’s brought to you by no other than Pragmatic Play