With modern global warming changes, it’s almost like you never know when it is going to snow or even where it is going to do so. Spain was a good example. If you prefer the sunshine, beach and palms then you would rather stay in one of the warm tropical islands, opposed to the cold northern region. Well sometimes, no matter how hard you try you just can’t escape mother nature. Tropicool is what the name suggests, a tropical island, covered in cool weather. It’s supposedly located off the coast of Antarctica, but the last time we checked, there were no palm trees there, hmm, strange.

ELK Studios love to provide us with entertaining and quirky stories. Seems like their imagination is full of ideas. Our two characters, Tony Toucano and Fiona Flamingo grew tired of the constant migration every year, so they created their own tropical paradise, right at their doorstep. Tropicool isn’t lined up as one of the biggest releases by ELK Studios, but it is no weakling either, coming in with a scorching (or freezing?) max payout of 10,000x. This is a holiday like no other, so what are you waiting for, pack the bags and let’s go!

Tropicool looks exactly how one would expect. It’s beach scenery with palms, small beach huts and surfing boards, but everything is frozen and covered with snow, which renders some of the items quite useless. Anyhow, ELK Studios have built a fun presentation. The music is especially great. The jazzy tune mixed with a little tropical flair turns out to be a good combination. For those familiar with video games, it really reminds of the original Sims, especially the downtown area. Otherwise, it could also be compared to elevator music, a good one might we add. 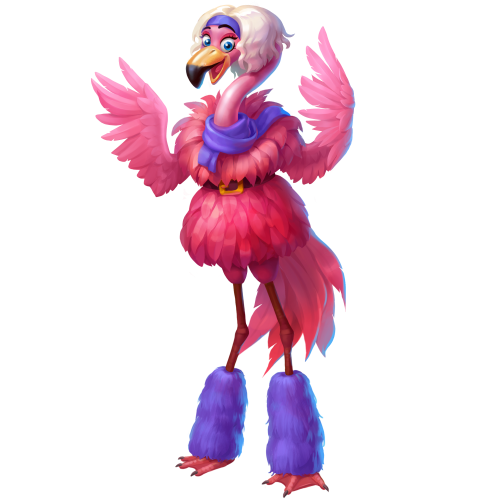 Tropicool comes with a 6 reel 6 row layout. This slot also utilizes the Avalanche mechanism, meaning that winning symbols explode, while new ones drop from above. ELK Studios have previously used this feature. We actually got to experience it quite recently with the release of Cluster Slide. The symbols further enhance the tropical setting. Tropicool comes with some treats, such as 4 differently coloured plums, apple, coconut and strawberry. Both bird characters can appear 3 rows high, but the legs, torso and head are all separate symbols. So there is a chance to see some headless birds. All the fruits appear inside ice cubes, for that little cool touch.

Tropicool is not to be confused with a cluster slot, because the wins are made according to paylines, which in total can be up to 46,656. Tropicool is a medium volatility slot, so it’s a bit easier to handle than a high volatility game, in a way. The default RTP is 95%. That definitely is on the low side, but it’s not game-breaking if you are having any thoughts on that. We are not reaching Nitropolis levels of payouts, but Tropicool’s 10,000x is more than what the average slot can offer, so all-around we should be happy. Tropicool bet range is 0.20 – 100.

There is a good chance that you have already spotted the extra reel situated above the Tropicool game layout. Feature reel works together with the Avalanche mechanism. While you make way for new symbols, there is a chance that special symbols can drop and fill those empty spots. These feature symbols are the following:

• Wild – regular wild symbol, which substitutes for all regular symbols
• Multiplier Wild – wild with a multiplier of 2x – 5x
• Locked Wild – wild symbol that stays locked for 3 wins
• Row Swap – one symbol that replaces all other symbols on that row

The big “B” is the Tropicool bonus symbol, so there is no mistaking it for any other. 3 or more Bonus symbols trigger the Free Drops Bonus Game. The reward is 10, 15, 20 or 25 Free Drops for 3, 4, 5 or 6 symbols respectively. During the bonus game, the Feature Reel gets two additional special symbols. Extra Drop adds 1, 2 or 5 extra spins while Progressive Multiplier adds an extra multiplier of 1, 2 or 5x. X-iter feature lets you purchase 3 different Free Drops variants, as well as a guaranteed win and locked wilds.

Tropicool brings a whole new experience. The theme and the setting is something that we haven’t seen before. In general, ELK Studios are keen on releasing unique slots that don’t draw too much inspiration from other providers. Tropicool is a fun slot, and it doesn’t have many flaws. Probably the worst thing about it is the 95% RTP. By any slot standard, that is a low percentage, which might discourage some players. But otherwise, it’s a nice game, as everything else is well built.