Why is it always the dragon that guards the treasure? You won’t really find an answer to that question here, but you will find another dragon that guards another treasure. Instead of prince charming, we take on a role of a miner, who is relentlessly trying to dig up some shiny ores and gems. You will have to endure the relentless heat and hope that you get out of the mine before the dragon has any other ideas. The odds may seem stacked against you, but thanks to his mighty hammer, our miner can pull off anything. So what are you waiting for, jump in the cart and away we go into the Treasure Mine!

Like on the majority of these Power Reel games, Red Tiger take older slots and give them an overhaul. Most of the visuals stay the same, only the quality improves. In this case, we are deep down into the Treasure Mine, where shiny gems are gleaming on the walls and piles of gold glimmer in the distance. It’s an okay looking presentation, nothing particularly special about it. At least we have some heroes and a story, which makes this more than just simple mining themed slot. 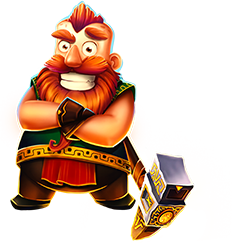 Clearly, the most important aspect and change come to the game layout. Power Reels have greatly extended the original Treasure Mine layout, as we now have an 8 by 6 set up instead of 5 by 4. The Power Reels haven’t really proven themselves to be too powerful, but perhaps we will have better luck with them on this Treasure Mine slot. Symbols are similar but not identical to the original title. Four lows are the classic J, Q, K, A and highs are four objects, such as lantern, googles, hardhat and hammer, in other words, all the miner necessities.

When slots receive a new Megaways version, the payout and potential usually get a lot better. This is not the case with Power Reels, because Treasure Mine still remains casual and tame. The volatility is a bit higher now, although it still is Medium, while the RTP for this slot is 95.75%, which is a bit worse than before. The max win still floats around that 1,200x mark. All in all, these stats raise no enthusiasm. Treasure Mine Power Reels seems to be a good casual slot to play, but when it comes to potentials, it doesn’t hold many surprises. The bet range for this slot is 0.10 – 80.

Additionally to the 8 regular symbols, we also receive the standard Wild and 3 different Character Wilds, which are a crucial piece to the Treasure Mine Power Reels bonus features. These special Wilds appear in a 2x2 size. Only one Wild per type can drop on a single spin. These Wilds don’t do much on their own, but when you combine them, that’s when the fun begins. The special Wilds are Diamond, Miner and Dragon. In total there are 4 possible combinations:

• Diamond and Miner – Miner begins to smite the diamond, which results in multiple cash prizes dropping to the player
• Miner and Dragon – The dragon attacks the miner, who then begins to flee from it, leaving a trail of Wilds behind him
• Dragon and Diamond – Once or twice, the dragon breathes fire unto the diamond, exploding multiple Diamond Wild across the reels
• Diamond, Miner and Dragon – The dragon breathes fire unto the diamond, dropping multiple Diamond Wilds across the reels. The miner then mines these diamonds, which results in extra cash prizes 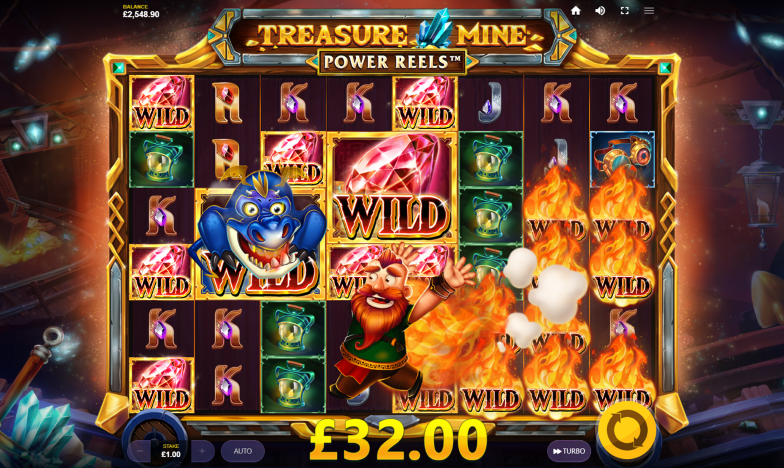 For better or worse, Red Tiger are continuing to produce new Power Reels slots. The original Treasure Mine wasn’t a big hit, but the Power Reels addition isn’t the saving grace either. It adds some new elements and perhaps a new way how you approach the game, but it still remains this casual, easy-going slot, with a potential that’s more on the low side. Don’t get it wrong, the gameplay can be really fun, especially when you start to combine these Wilds. A combination of all three Wilds will let you extract the most out of this Treasure Mine Power Reels slot.