When you hear about a new Nolimit City release, you begin to think, what craziness they have decided to do now? And more often than not we are surprised by the ideas that come from this company. It’s crazy how Nolimit City went from lighthearted slots about owls, fruits and punks to dark, twisted and brutal themes and characters. Tombstone RIP is another brutal slot that will blow your mind. By now you should know, that Nolimit City love western settings. It started with Tombstone, then Deadwood and finally El Paso Gunfight. The fourth western instalment is more brutal, rewarding and downright mental than all of these previous slots combined. You’re in for a show, so stick around.

We’ve said this before and we will say it again, Nolimit City have taken over the industry. They had an absolutely dominant 2021 and we don’t think they’re planning to stop in 2022. It’s honestly so exciting to see what the future holds for this company as they have already accomplished so much. By producing these dark and memorable slots, they have managed to find their niche in the industry, but it’s not just all about looks, as they can back their games up with exciting and innovative features and gameplay. Tombstone RIP is the next big thing in the slot gaming world, so see for yourself, what this slot can do.

Tombstone RIP comes with some strong visuals, so if you’re easily squeamish, tread carefully. The game has a dark, melancholic feel to it. Usually, western slots focus on the adventures and cowboy heroics, but Tombstone RIP shows the dreadful side of western life, focusing more on criminals and their execution. It’s daring, but we don’t expect anything less from Nolimit City. In all honesty, though we can see the beauty behind this design. Nolimit City are trying to portray a story and they are being bold about it. Tombstone RIP reels are located on a rugged wooden platform. We assume this is the place, where all the felons are hanged, judging from the stains of blood. The sign below read “Brutality – Then You Die”. Quite a statement. 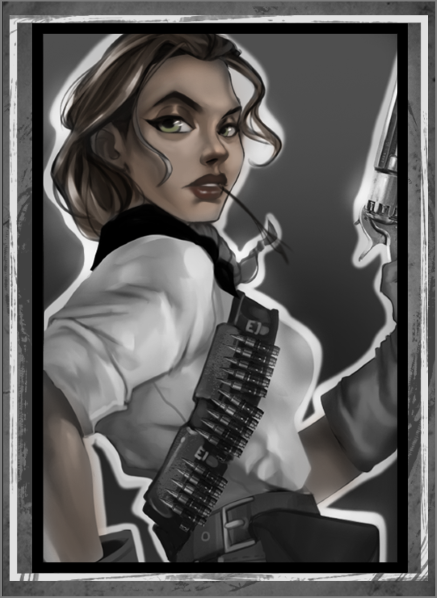 The western music sets a nice tone, while we tackle these Tombstone RIP reels. Nolimit City have gone with a 2-3-3-3-1 row layout, which creates 108 paylines. The style of the layout is a bit unusual, but when have ever Nolimit City been basic. Low symbols are regular royals from 10-A. The high symbols, or in this case the Cowboy symbols are 5 characters, all dressed in black and white. Some of these are criminals, some the local law enforcers. It’s a forever lasting clash between both sides. A fellow by the name of El Gordo is the highest value cowboy symbol. The fifth single-row reel has some special abilities. On this reel, all symbols count as double and only high symbols land on it.

Calling this a high volatility slot wouldn’t justify its true nature. The volatility is closer to insane than high. This means two things, first of all, if Tombstone RIP is having a quiet day, then you won’t be having a good time, but if payouts start to roll in, then this slot can produce a mind-boggling 300,000x max win. For max bettors, you’re looking at a 15 000 000 EUR payout. Crazy stuff. The RTP that comes with it is 96.08%. Tombstone RIP bet range is 0.10 – 50. This slot is perfectly compatible with all modern devices, so you can have a go on mobile or desktop alike.

Under the Tombstone RIP layout, you may spot an ON/OFF switch. This is the Enhanced Bet feature. If the switch is turned on, your base bet is increased by 10%. With this, you can increase your chance to trigger the Hang’em High/Boothill Free Spins, as a scatter is guaranteed to land on the second reel.

Before we get into the Tombstone RIP Free Spin features, let’s discuss the special symbols of this slot. The hanged Tombstone criminals are xNudge Wild symbols. Whenever these symbols are visible, they will nudge, to reveal their full size. Each move or nudge adds a 1x multiplier to this Wild. These symbols appear only on the three middle reels.

Besides xNudge Wilds, on Tombstone RIP you will also find regular Wilds and Splitting Wilds. The Splitting Wild symbol splits itself and other symbols on that reel in half, thus doubling the value of that symbol. To take it up a notch, xSplit Wilds split into two symbols and they split symbols to the left into 4 different paths. The xSplit Wilds only land on the last reel. If an xSplit cuts an xNudge Wild, the multiplier for that symbol will double.

If you land 3 Hang ‘em scatters and a Boothill Scatter then 10 Boothill Free Spins are triggered. Alternatively, you can upgrade your regular Hang ‘em Free Spins by landing a Boothill scatter on the last reel during the bonus phase. Like before, special symbols increase your total multiplier but additionally to that, each Cowboy symbol on the last reel will turn all instances of this symbol into Wilds. Also on each spin, a random multiplier ranging from 5x-999x will be drawn and added to a random Cowboy symbol. Like always, Tombstone RIP features can be purchased upfront. The prices for Hang ‘Em High and Boothill Free Spins are 70x and 3000x respectively. 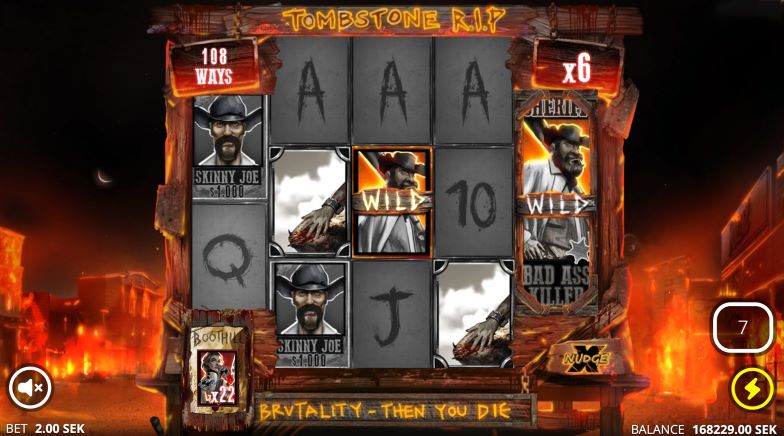 We like when providers are trying to stand out and create something special and memorable. For a good while now, Nolimit City have been doing just that. The slots that they have produced in a span of a year are close to iconic, if not now then surely in the future. These crazy themes and settings completely grab your attention and once you’re in, you start to see how well made these slots are. It’s the pinnacle of slot innovation and we wouldn’t want it any other way. Tombstone RIP draws some similarities with previous titles, as we do see the return of xNudge and xSplit, but like always, Nolimit City manage to create something totally new. For a long time, San Quentin stood as the highest paying Nolimit City slot, or any slot for that matter. Now with Tombstone RIP doubling that max win up to 300,000x, we think there is a new king in town.

How volatile is the Tombstone RIP slot?

What is the max win on Tombstone RIP?

Can I try the Tombstone RIP slot for free?

Yes, before you commit any real funds, you can play this slot for free here on SixSlots.

Preparing early for the Valentines, Play’n GO are bringing us Love Joker. This is also their 12th game in the Joker series.