If crazy rave parties are your type of fun, then here is something special for you. The Rave is the next slot from Nolimit City – the bold and fearless casino game provider. If you’re a bit more old-school and you don’t know what them youngins are up to these days, then Rave is a big techno music party where everyone goes absolutely bonkers. It is also associated with a couple of substances, but we won’t really get into those, we’re sure you know what we mean. Knowing Nolimit City slot style, we are eager to see what craziness awaits us in The Rave slot.

There is not much of a plot to this game, but we are seeing some familiar faces. DJ P5ychØ Manhunt is operating the DJ booth, but you might have seen him in the San Quentin slot. Real name, Joe Labrador is seemingly out of prison, fully enjoying his time, or perhaps, this is before his prison life? Who knows, we’ll leave that bit to interpretation. It’s one of the biggest parties that the iGaming industry has seen, so you better be prepared, this will be one wild wild night.

The party is alive and kicking on The Rave slot. In the background, we can see some blurred actions of people dancing and having a blast. The Rave has a dominant purple tint, so we hope you have nothing against this colour. As you could expect, the music is bumpy and ideal for techno lovers. The layout consists of 5 reels and 3 rows. At the top of the game layout, we can see the DJ and the sound system next to him. It’s not necessarily a presentation that leaves a huge impact on us, but it does get a bit unique and amusing once you get to winning animation screens. 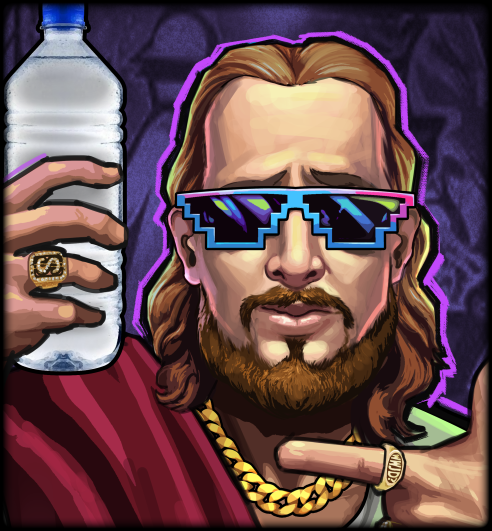 The Rave is a 243 payline slot, the same way it is on San Quentin and some other Nolimit City games. Symbols are split into lows and highs. It is Nolimit City, so new symbols are crafted for a new game. Low symbols consist of 5 items – chain, cash cannon, shutter shades, headphones and lollipops. The high symbols are 5 eccentric characters, who are without a doubt enjoying their time here at The Rave. It wouldn’t be a Nolimit City slot without special symbols, so we also have plenty of those.

The Rave slot is a real high-potential monster. There is not a single Nolimit City slot these days that doesn’t provide good payouts, so we can’t say that we’re too surprised, but it’s simply due to the fact that Nolimit City slots have spoiled us too much. The max win on The Rave slot is 41,500x. That is a big boy payout which surely nobody would mind hitting. The best RTP variant for The Rave slot is 96.09%, but some operators might also use 94.29%. The Rave bet range is 0.20 – 120.

The Rave is loaded with bonus features, so without further ado let’s get into them. We’ll begin with the most simple option, which is the xSplit Wild. This feature splits the symbols in half on the reel that it is located on, then splitting itself into two wilds. If two xWays symbols land on the reel, they will create an expanded xWays Wild, that stacks up 6 to 11 Wild symbols.

There are two paths that The Rave scatters symbols can create. By landing 3 or 4 scatters, you will be rewarded with the Murder on the Dancefloor feature. Depending on your scatter amount, you will be given either 3 or 4 Enhancer Cells. These enhancer cells may contain xWays, xSplits, Wilds or high symbols. So essentially, you’re given Free Spins with high-intensity action. The symbol multiplier is present on reels 2-4 and it is activated each time when a high-paying symbol appears on the Enhancer Cells. Each xSplit symbol that lands on Enhancer Cells also increases this multiplier by plus 2x.

The absolute best thing you can do on The Rave slot is to get 5 scatters, triggering God is a DJ feature. This will reward 5 enhancer cells with all of the mentioned features plus extra modifiers on each spin, as opposed to the other bonus, where they appear randomly. These are the modifiers on The Rave slot:

Mashup! – turns all character symbols into the highest paying symbol

Bonus Features can also be purchased for sums ranging from 68x to 522x. 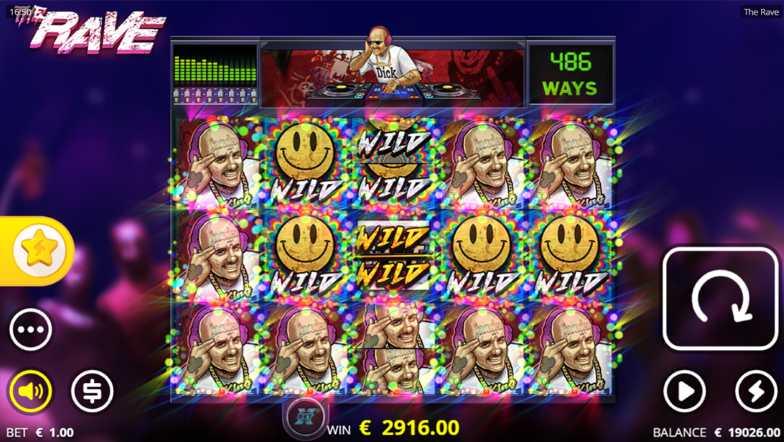 Wild rave party with dazzling gameplay, sounds like Nolimit City alright. Although considering the reputation of the word Rave alone, maybe we were even expecting something crazier but it is wild enough, at least for a common person, we’re sure hardcore rave goers might disagree. At the end of the line, The Rave is a fun slot with a lot of crazy visual elements. It is full of bonus features and it has a massive winning potential. It doesn’t leave as strong of an impression on us as other Nolimit City slots, but it’s still absolutely wonderful to play.

How volatile is The Rave slot?

By Nolimit City's words, The Rave is an extremely volatile casino game.

What is the max win on The Rave slot?

Can I play The Rave on my mobile device?

Yes, The Rave is fully optimized for mobile platforms.