Some fish for a hobby, some do it for profit, but at the end of the day, we can all agree that fishing can be relaxing. The sun is out and the old fisherman Harry is dreaming of the next big catch. Little does he know that all big fishes are right under his nose. That’s where you come in, lending a helping hand, so together you may catch the dream fish and take the profits that come with it. The Greatest Catch is a fitting name for this slot, as ultimately players can get their hands on a fortune worth 10,000x! Considering that this slot is made by Evoplay we can already sense that it will be presented beautifully. Cast a fishing rod and help Harry fulfil his biggest dream.

The Greatest Catch brings the sort of vibes we expected from such a slot. It’s easygoing, so being tense is not an option with this game. Symbol spinning takes place under the water just below the fisherman’s boat. It’s a nice, green pond, full of various plants and creatures. The animations are smooth and we can quite confidently say that Evoplay have once again done a solid job on the presentation. It certainly looks more special, but as you can see The Greatest Catch slot has the standard 5x3 layout with 10 paylines. 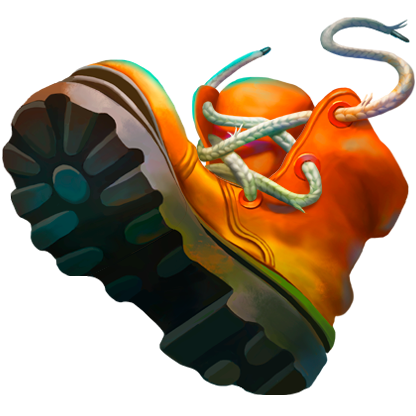 Ten regular symbols are equally split into highs and lows. Colourful bubbles of royals are those symbols with the lowest value, but the bigger catch is the fish, bag, frog, hat and boot. During Free Spins, the size and value for the fish symbol can vary from 2x-2000x, so it either can be the worst or the best high symbol. Harry the fisherman assumes the position of the Wild on The Greatest Catch slot.

Volatility for The Greatest Catch slot hasn’t been maximized, which seems fitting, considering that this slot doesn’t come off as overly aggressive. Other than that, nothing particularly stands out. The Greatest Catch has a nice 96.09% and the bet range is 0.10 – 75, so rather standard stuff. Now the best win you can “catch” is 10,000x. Even if you hate fishing, you have to admit, that this number is tempting. The Greatest Catch is also wonderfully optimized for mobile devices.

Regular fishes, frogs and boots are good for the pastime, but there is a much bigger catch, that keeps Harry’s thoughts busy. The fisherman is hunting for The Greatest Catch Scatters. By catching 3, 4 or 5 of them at once, respectively 10, 15 or 20 Free Spins are awarded. During Free Spins, Wild symbols capture all visible fish symbol values. Every 4th Wild symbol awards additional 10 Free Spins, which also increases the multiplier for the upcoming Free Spins. For each additional 4 Wilds collected the multiplier keeps on growing. After collecting 4 Wilds three times, your total multiplier will be 10x. If a spin doesn’t produce a win and there is at least one Wild present, then the Dynamite feature is triggered. This feature replaces 3-6 regular symbols with Fish symbols. 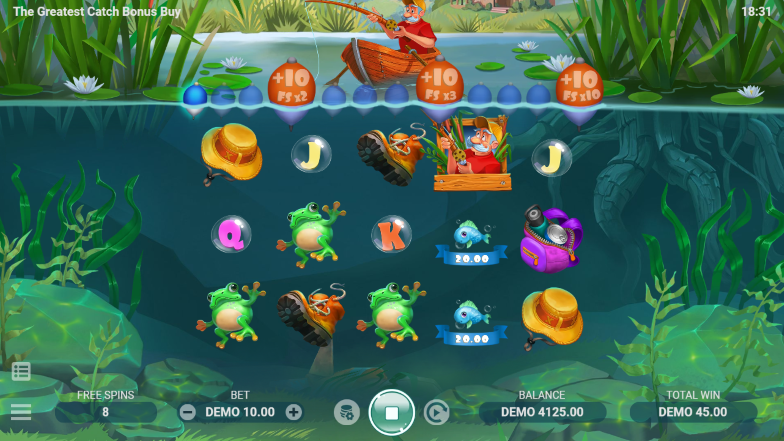 The Greatest Catch truly is great. Yet again Evoplay have managed to combine lively and beautiful theme while managing to provide a highly exciting game model. We didn’t find it that hard to get some good wins and we even managed to trigger the bonus game under 10 spins, so do with that information what you will. The Greatest Catch wonderfully captures the relaxing spirit of fishing but when things get serious, it’s like battling a shark. With all the Wilds and multipliers The Greatest Catch can push boundaries up to a 10,000x win. We don’t see The Greatest Catch becoming the Evoplay flagship game, but it’s a good filler for those moments of boredom.

What is the max win on The Greatest Catch?

What is the RTP on The Greatest Catch?

Where to play The Greatest Catch slot for free?

You can play The Greatest Catch slot for free on SixSlots.

Wazdan are inviting us to the Far East. Find your fortune in this jackpot-filled game. Tranquility and peace for those who play.

Sizzling Eggs slot takes us to a mysterious world, where you will find eggs, that in value, are closer to Fabergé than chicken’s