The mischievous trickster is back on our screen. Loki has always been in the shadow of his brother Thor, but now he has had enough. Thor is about to be crowned the king of Asgard, but Loki won’t accept it. He has his own devious plans to stop this, so will Loki get his way? We may find that out on Tales of Asgard: Loki’s Fortune slot. Scandinavian company Play’n GO are no strangers to Norse mythology, but for this slot, they have chosen the more cinematic approach, which is more similar to the hero movies we saw from Marvel. It’s not a straight copy though, as Marvel’s Loki was slim and dark-haired as opposed to this Loki, who is buff and red-haired. You be the judge, which one is closer to the old tales.

Norse mythology is widely used in video slots. There are usually two ways in how providers like to portray this theme. Some go for the more authentic and realistic approach, sticking closer to the real culture and original tales and then there are providers that go for a more imaginative approach, bringing in several modern elements to their game. Play’n GO seemingly chose the latter, as Tales of Asgard: Loki’s Fortune reminds us more of that modern, Marvel-style presentation. There are plenty of interesting points to cover, so let’s get into this one.

The action is set in a throne room, which is quite nicely designed. If we had to find a word for this style, we would call it Sci-fi Norse. The mischievous god Loki sits on a throne that is situated next to the game layout. The game grid comes in a size of 5x5. Play’n GO are one of the best in business when it comes to these larger grid slots, so we feel pretty positive about this one. From a visual standpoint, this slot is similar to Odin: Protector of the Realms. The game not just looks well, it’s also an absolute joy to play, as the animations are nice and smooth. 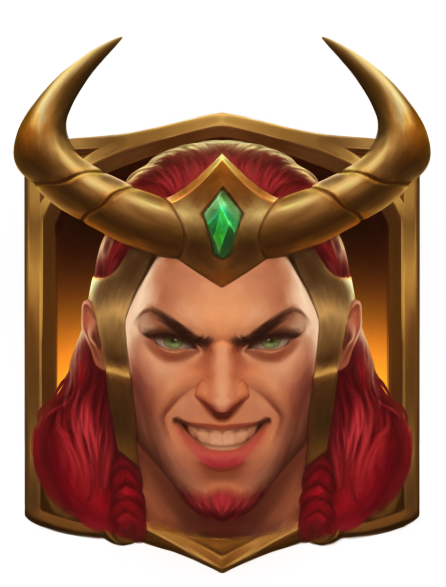 Tales of Asgard: Loki’s Fortune slot symbols are unique but they are not that distinctive from each other. They all use this bronze style, which is seen throughout the game. Low symbols portray various runes and medium symbols are engraving of animals. Two high symbols are engravings of Thor and Odin. In total there are 10 regular symbols. The large grid layout comes with 3,125 base paylines, but they can go up to 100,000 thanks to splits that come from mystery symbols. All regular and mystery symbols can be split into two equal parts. The mystery symbol reveals one random matching symbol type.

Besides the already mentioned Mystery symbol, there is also a Wild and Scatter. Mystery symbols aren’t active on their own, instead, initially, they land as simple blocker symbols. Wild symbols are the ones that make Mystery symbols active, that’s when these symbols reveal one equal regular symbol. Mystery symbols can also appear in a split version, revealing two symbols instead of one. If the screen is fully covered in mystery symbols, then a wild is not needed for them to be revealed.

Tales of Asgard: Loki’s Fortune is mainly focused on these mystery symbols, but that’s not the only bonus feature, that it has on offer. Loki’s Mischief may trigger randomly on any spin. The said feature will trigger one of the following modifiers:

• 1-3 Wilds will be added to reels on random positions
• 2 scatters are added to reels, increasing your chance to score Free Spins
• Daggers are thrown, which split all regular symbols into two

With the help of 3, 4 or 5 Emerald scatters, you can trigger the Free Spins bonus game. The award is 8, 12 or 20 Free Spins respectively. During Free Spins, the chance to land Wilds and Mystery symbols is increased significantly. The Free Spins game cannot be retriggered. 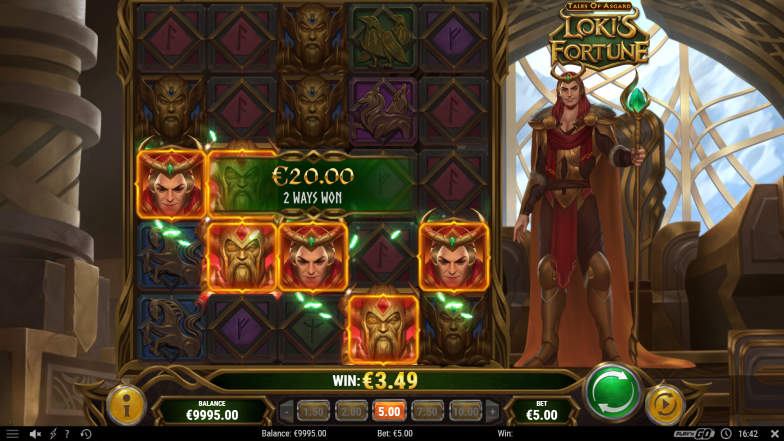 This is not the first ride for Play’n GO when it comes to Norse themed slots. They actually have plenty of them, so in this sense, Tales of Asgard: Loki’s Fortune isn’t exactly a whole new world. Still, we enjoyed what we saw, as visually Play’n GO have done wonders. If you’re not a fan of the way that Marvel have portrayed Norse gods and Asgard, then there is a good chance that you won’t find this slot too appealing, but if you don’t mind that, then Loki’s Fortune looks great. Mystery symbols seem to take all the spotlight, as Free Spins on their own aren’t that exciting, but overall Play’n GO have delivered quite a package.

How to play Loki’s Fortune for free?

Use the available demo version, which you will find on this webpage. The demo is published on the 28th of October 2021.

What is the max win on the Loki’s Fortune slot?

What is the Loki’s Fortune slot’s RTP?

The default RTP for this slot is 96.20%, but it can be lower on specific casinos.