The Super Stars series started out in 2015 when the first Super 5 Stars slot was released. Throughout the years this Red Rake Gaming series has stayed true to its core, implementing little changes to the visuals, focusing more on different features. This Las Vegas-inspired slot series perfectly mixes the classic casino experience with new and exciting bonuses and features. Basic fruit slots may seem boring to some, but thankfully the Super Stars series is not about that life, at least not fully, because it could be generalized as a fruit slot, but it has many exciting bonus features. Super 20 Stars combines the best features of all previous slots, so those who played Super 5 Stars, Super 7 Stars, Super 10 Stars, Super 12 Stars or Super 15 Stars will find some familiar mechanics in this game.

There is a certain exciting feeling when you step into a land-based casino for the first time. So many colours and noises, where to even begin. These days, more and more players prefer to play slots at home, because it’s simply easier and more convenient. The only thing lacking is the atmosphere, until this point, because Super 20 Stars will provide just that. Super 20 Stars lets you enjoy that casino feeling right from your home.

Red Rake Gaming have never really made graphically complex slots. The same can be said about Super 20 Stars. It’s a simple casino scenery with a couple of slot machines in the background. You are seated in front of the Super 20 Stars slot machine. If you play it full screen you might even feel like being in an actual casino. You can also hear the general chatter from the people around you. Some of them even cheer you on when you win. The experience feels more immersive on headphones. If you’re more used to flashy, modern slots, then Super 20 Stars won’t really live up to your standards. 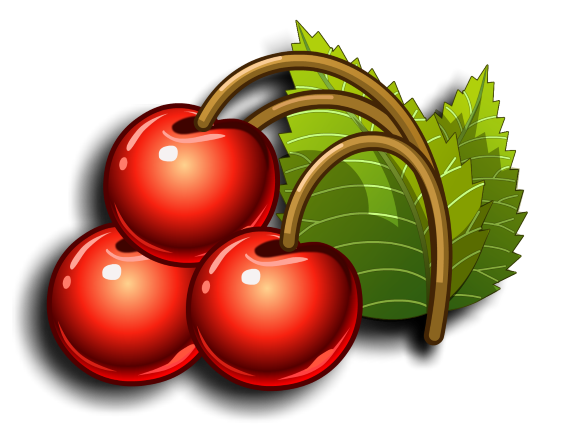 With the 5 by 3 game layout come 30 paylines, which is a bit more than a typical 5x3 slot might offer. There are a lot of different symbols on Super 20 Stars and we mean it. The reason for that is the inclusion of many symbols and features from the five previous games. Let’s take a look at some of them. The most typical regular symbols are cherry, bell, bar, 5 bar, single, double and triple burning sevens. All of these symbols also have a blue crystal version. We are just getting started because there are loads of specials symbols, such as different wilds and scatters.

Super 20 Stars is filled with content and good chances to score some decent payouts. It is a low volatility slot, so it has a more “easygoing” nature. This usually also means that you will come across plenty of wins, although not always they will be huge. The RTP for Super 20 Stars is 95.40%, a bit low but not the worst we’ve seen. On average, every second spin is a win, so in the long run, you can build up a decent bank. It’s a marathon, not a sprint. Super 20 Stars provides a bet range of 0.30 – 75. This slot can be played on all devices.

This is a pretty hefty list, filled with many great Super 20 Stars bonus features, so we will try to keep it tidy and punctual. As we mentioned, all regular symbols have a blue crystal version. To activate the Crystal Symbol feature, you will need to score one star at the bottom of the reels and one star on the right side of the panel. The symbol, which is located at the intersection of these two stars will be turned into a Crystal symbol. Afterwards, all other symbols of the same type will also turn into crystals, providing wins without considering paylines. Finally, the left panel side will randomly choose a multiplier which will be added to this win. The highest multiplier on this scale is 50x. 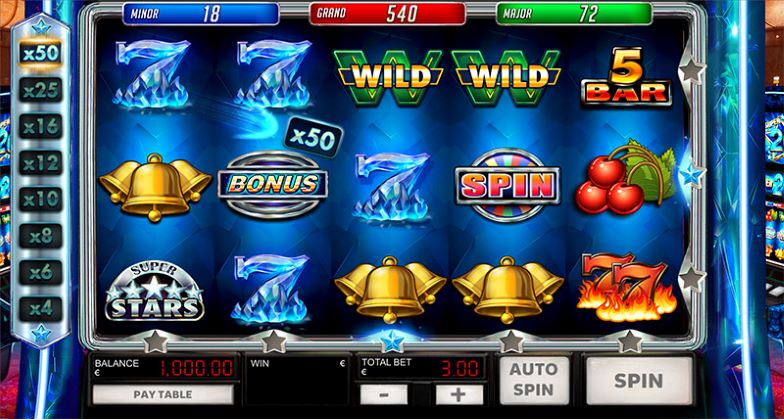 Taken from the previous Super Stars series slot, we have the Super 15 Progress Bar. The progress bar, which is located on the left side, is filled up by each non-winning spin. If you fill this bar, the Stars Fusion Minigame is triggered. Players start with 3 spins and seven Super 15 symbols on a new 7 by 5 layout. This essentially is a “hold and win” type of bonus. Only special Super 15 symbols drop and each new spin resets the spin amount back to 3. The acquired symbols will try to merge to form the best possible payouts. The minigame ends when your run out of lives/spins or when you fully fill the layout, which results in the Grand Prize. 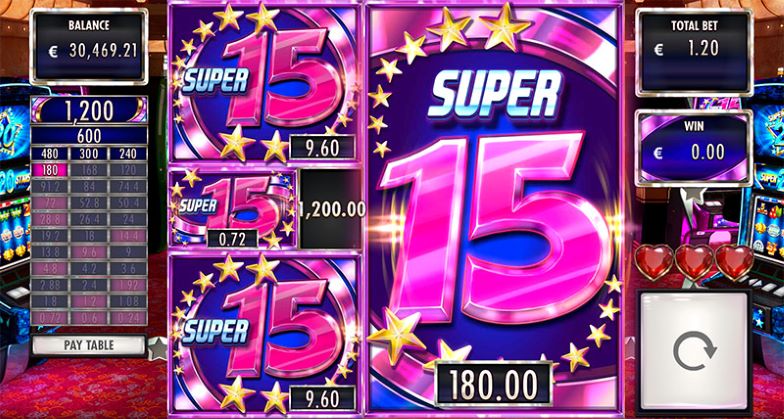 A single Super 12 Stars symbol in the middle reel can launch the Lucky Stars feature. 3 stars will expand, to cover the whole reel. Similarly to Stars Fusion, 3 Free Spins will take place where only star symbols can land on the free spaces. Each new star resets the spins back to 3. These stars contain different values and some of them can feature minor, major and grand jackpots. Bonus feature stops when you run out of spins or when you fill in all the empty spaces. 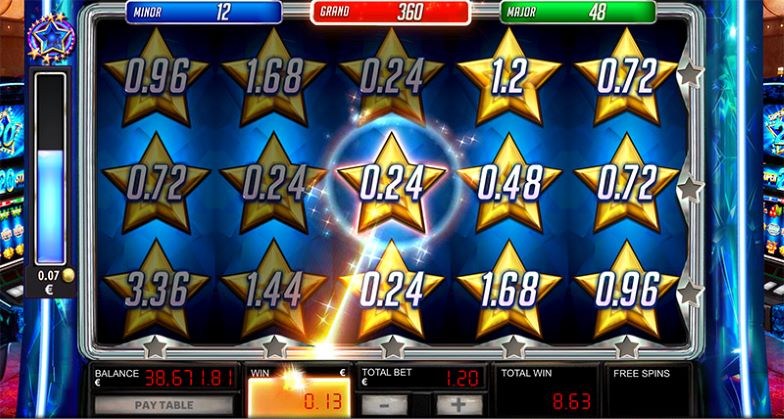 Another middle reel bonus comes from Super 10 Stars. Such a symbol on the middle reel will trigger the Frenzy feature. The middle reel takes another spin, which can display only special symbols, such as multipliers, instant free spins access and a Frenzy bonus game. The Frenzy bonus game, also known as Frenzy Roulette Minigame can provide you with various extra multipliers. In the beginning, players pick a colour or blue or yellow. If the wheel stops on your colour, then the corresponding multiplier is rewarded. The wheel stops spinning once you land on the wrong colour or when you reach 100x.

We keep on moving down through the list of Super Stars games. Next in line is the feature from Super 7 Stars. Like the 12 Stars feature, it is triggered when the Super 7 Stars symbol lands in the middle reel. The middle reel fully expands into a wild triggering a Wild Respin on the other reels. Compared to the previous ones, this feature is a lot more simple, which brings us to the last Super Stars bonus. Super 5 Stars are special symbols that grant instant jackpot prizes. Five Super 5 Stars symbols will award 200x, while nine basic Super Stars symbols award 100x.

It may seem hard to believe, but we have one final Super 20 Stars bonus feature. These are some good ole Free Spins. This feature is triggered by 3 bonus scatters. Free Spins start with a little pick’em game. One by one players need to reveal the hidden tiles. Once you match 3 variants the Free Spins can begin. The best possible outcome is 20 Free Spins with a 3x base multiplier. The Wild Plus symbol awards 5 additional Free Spins. In total, you can get up to 50 Free Spins. Red Rake Gaming surely love bonus features, because they have sneaked in another mini bonus within Free Spins. A Roulette spin can be triggered by 3 Wheel symbols. The wheel will reward one random multiplier. 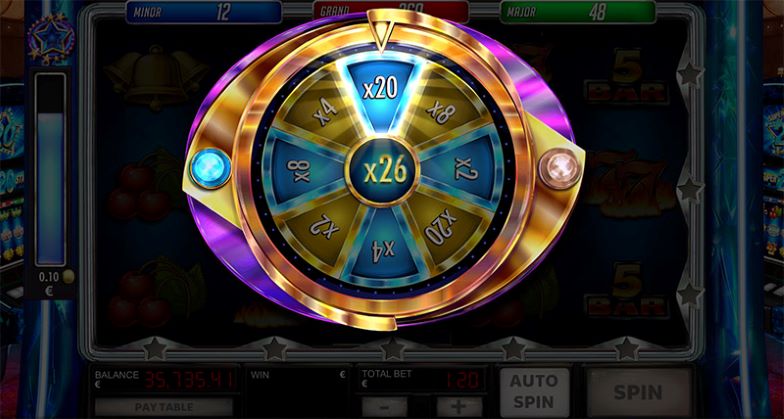 Well, that definitely has been the longest bonus feature section that we’ve had in a while or perhaps even ever. Super 20 Stars is all about that bonus life, no doubt about it. This slot bestows 6 main bonus features, plus additional special symbols, such as regular wilds. Super 20 Stars is a real diamond in the rough if you think about it, it’s not the most well-known slot series that’s for sure, but it deserves more recognition. What could be the deciding factor for some, is the low volatility. The high volatility slot dominance has been obvious, so it’s much harder to attract players with low volatility, because it usually means lower payouts, but still, it is possible to get some great wins on Super 20 Stars. Patience is the key because your profit could come in the long run. Overall, Super 20 Stars was a surprising experience. From the outer shell, it looks like a basic fruit style slot, but when you get into it, a new world appears.