There are a couple of Wild West slot series, which could be considered iconic by the most enthusiastic slot players. Dead or Alive may come to mind or the mighty cowboy slots from Nolimit City, but throughout these years, Quickspin also have been highly competitive, with their Sticky Bandits franchise. The first Sticky Bandits casino game came out in 2017 and it was afterwards followed by two more releases. Now we are facing the fourth instalment called Sticky Bandits Trail of Blood. This slot is shaping up to be a lot more aggressive than its predecessors. Is this a good thing? Suppose we’ll see soon enough.

Trail of Blood already sounds quite ominous, but don’t worry, there’s a good chance that you’ll walk out of this scrap with a fortune. If you wish to immerse yourself further, then here is the plot: we’re following an old sheriff named Tex Tallonis. By trying to bring justice to his town, he has made some serious enemies along the way. One dreadful night, these enemies struck back, attacking the home of Tex. This carnage resulted in tragedy, as Tex’s wife and children perished. After a year of solitude, Tex is back, looking to punish anyone who has done him wrong. You know what they say, revenge is a dish best served cold

Recently, Quickspin have released some rather basic looking slots, so for a moment, we started to worry, that we’re starting to lose the old Quickspin charm. Sticky Bandits Trail of Blood puts those worries to bed, as we are presented with a true movie-like presentation. Wonderful graphics, animations and attention to detail. The old Wild West town looks bleak and gloomy, but this is a story of revenge, so we wouldn’t want it any other way. Of course, it still seems playful in comparison with Tombstone RIP or True Grit, but style like that wouldn’t fit Quickspin, so we are fully satisfied with what we’re seeing here on Sticky Bandits Trail of Blood. 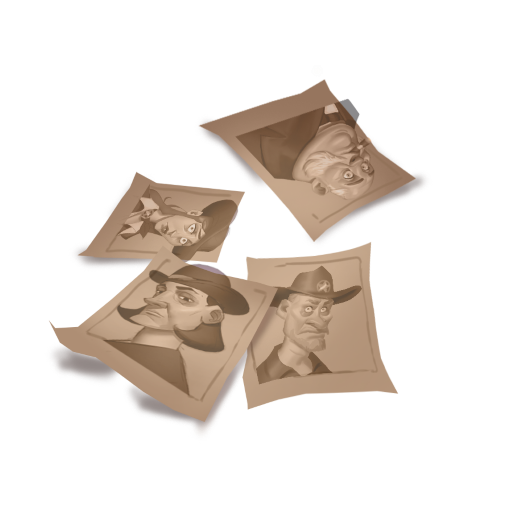 Our vendetta story will be played out on 5 reels and 3 rows. Lucky symbols shall be drawn on 10 paylines, so we are dealing with a pretty default set-up, which should feel familiar to a lot of players. Even the low Jack, Queen, King and Ace look nice on Sticky Bandits Trail of Blood and we’re especially pleased with the design of medium and special symbols. Arsenal of revenge weapons are considered the medium symbols, but the victims of revenge plan take the wild symbol positions, that’s why they are our main targets.

Sticky Bandits Trail of Blood is the most volatile slot in the Sticky Bandits series, but curiously enough, it owns the second-highest max win potential in the series. Of course, that doesn’t mean that this slot pays less because it’s important to note the actual percentage of hitting these sorts of wins, which for Trail of Blood seems higher. The RTP that Quickspin brings is 96.23%, which shouldn’t bring complaints from the player's side.

Instead of scatters, the Wild symbols trigger the main Revenge Free Spins bonus on Sticky Bandits Trail of Blood. For 3, 4 or 5 Wilds you will be rewarded 10, 12 or 15 Revenge Free Spins respectively. During these Free Spins, all Wilds become sticky, meaning that they remain in their positions for the entirety of the bonus. Each extra Wild that you get along the way also becomes sticky while rewarding an extra free spin. If you manage to compose an entire line of Wilds, then a Trail of Blood is formed, which instantly pays 300x per line on every spin! You can also buy this bonus feature for a price of 100x or 400x. Depending on your purchase, the feature will trigger with 3+ or +4 Wilds respectively. The story of Sticky Bandits Trail of Blood is a lot gloomier and darker than the ones we’ve seen on other Sticky Bandit slots. It’s almost like Quickspin are taking some notes from Nolimit City, but everyone loves a good revenge story, so we’re cool with this change of direction. Still, Quickspin have managed to keep their charm intact, providing us with a game that feels familiar yet new and exciting. Sticky Bandits Trail of Blood is actually very simple. The biggest wins come from Free Spins and sticky Wilds that are a part of this feature.

Yet, Quickspin have managed to make something extraordinary out of something seemingly simple, so it’s safe to say that we loved the experience we got on the Sticky Bandits Trail of Blood slot. It’s much less complicated than western slots from Nolimit City, for us, it feels quite familiar to Dead or Alive 2 and as we all know, that game was a huge success.

What is the max win on Sticky Bandits Trail of Blood?

Can I play Sticky Bandits Trail of Blood for free?

Yes, just use the available demo player, which you will find on this page.

What is the minimum bet on Trail of Blood slot?

The minimum bet on Sticky Bandits Trail of Blood is 0.10 EUR.