We’re going back to days when even Ancient Egypt was a distant future, the days when the earth was ruled by dinosaurs, sabres and mammoths. Pragmatic Play and the Reel Kingdom are combining the stone age with Vegas, the result of this is Rock Vegas. We’re not sure if cavemen were into gambling, perhaps, they used rocks or bones for some elaborate early casino games. We’ll leave that part to your interpretation. Whatever was the case, you’re all invited to experience the story that has been made by Pragmatic.

Slots set in the stone age don’t come around that often, but we’ve seen a couple of examples before. One of the top games themed around this period is 1 Million Megaways BC, but, of course, there are a few other notable games. Rock Vegas is bringing interesting 3D graphics with a potent payout model. For the most enthusiastic cave dwellers, this slot can provide a win of 10,000x. Seems like sticks and stones may break the bank after all.

The wonky 3D models for us looks like a combination of Bigger Bass Bonanza and the Ice Age movie. It almost seems like Pragmatic are trying too hard for the game to look realistic, instead, it just ends up looking a bit odd, but hey, it’s not like odd is bad right? Long green vines, stone walls, animal sounds and burning torches are some other factors that buff up the presentation. Music is quite jolly, so in general Rock Vegas is a pretty welcoming slot. The layout consists of 5 reels and 3 rows. 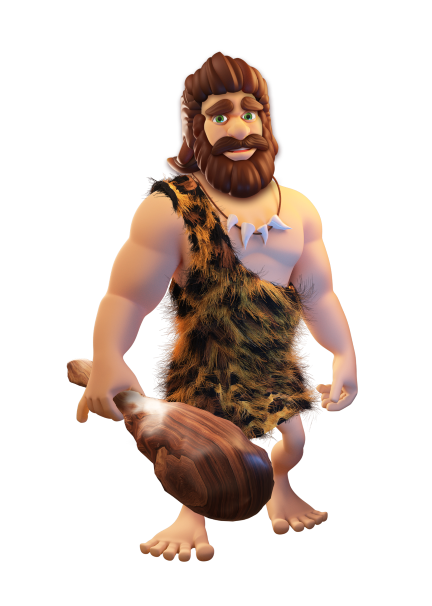 Let us meet the inhabitants of the jungle. Taking high symbol positions, we got a mammoth, some sort of lizard, sabre and the caveman. The low symbols are from a set of much more simple 10-A symbols. Rock Vegas game comes with 20 paylines, so with the existing layout, we got a fairly basic set-up so far. Surprisingly there is no Wild symbol, so the only special symbol you’ll see during the main game is the Bonus symbol.

The Vegas element in this slot is fairly strong. At its best, Rock Vegas can produce a win of 10,000x! Rock Vegas volatility is high, as it is rated 5/5 by Pragmatic. Another positive aspect is the RTP, which is 96.64%. We can consider that to be on the high side. The bet range is 0.20 – 100 and the slot is compatible with all devices.

There’s only so much fun that the Rock Vegas main game can provide, so if you want to experience the best from Rock Vegas, then this section is for you. To trigger the main and sole Rock Vegas bonus feature, you’ll need to land 3 or more Bonus symbols at once. This will then activate the Mega Hold and Spin feature.

Mega Hold and Spin feature brings in a completely new 10x10 game layout and normal symbols are replaced with special rock symbols. Starting from the lowest value, we got the blue, green, orange, purple and red rock, which is the most valuable of them all. If you manage to hit 5 Bonus symbols at once, then during this bonus only orange, purple and red rocks will appear. If you have done it with 4, then only the blue rock is tossed away.

The Rock Vegas bonus begins with 3 respins, which reset every time a new rock lands. All rocks that you do acquire, stay locked into their places. If a cluster of 2x2 or 3x3 symbols lands, then these symbols will merge, creating one big rock that adds an extra multiplier up to 500x. Mega Hold and Spin bonus game ends when you run out of respins or when the whole layout is filled with rocks.

Some rock symbols can drop with key symbols attached to them. These keys are collected and added to the key trail. If a key reaches a chest, a random modifier is triggered:

If you reach the end of the trail, then a random multiplier from 2x-100x is collected and added to the accumulated base multiplier.

Rock Vegas heavily relies on its Bonus Game, as pretty much all significant action comes from this one feature. Rock Vegas draws some inspiration from previous Pragmatic games, but it still manages to feel new and welcoming. We weren’t really that drawn in by the 3D visuals, but it’s not a bad looking slot either. Rock Vegas has a lot of multipliers and flashy modifiers, so we’re sure that plenty of players will want to try their hand with this Rock Vegas slot.

What is the Rock Vegas RTP?

How to trigger the Mega Hold and Spin Bonus?

To acquire this bonus feature, you’ll need to land 3 or more Bonus symbols.

Can I play Rock Vegas for free?

Yes, if you wish to play Rock Vegas for free, use the available demo version.

Bask in the glory of the gods and become the new master of Valhalla. Norse heroes and legends are bringing in a 20,000x payout!