Ahh Road Rage, this is something that almost every driver has come across. Driving a car can be fun, but if you do it on daily basis, you’re stuck in massive traffics and some bloke decides to cut you off, then there come moments, when the driver has had enough, and they let their lungs out, cursing and screaming. Of course, that’s the mild version of things, because sometimes the drivers hop out of their cars and then the whole hell breaks loose. Anyway, you get the idea, so after a long day on the road, you now have the chance to experience this action once more in a form of a video slot. The latest Nolimit City called Road Rage is here.

No matter what Nolimit City release, there is always a huge hype about it. This provider has been on a stellar streak for pretty much a whole year now, producing innovative, unique and sometimes downright crazy casino games. After that build-up, we have to say, that Road Rage steers into a slightly different direction. Yes, Nolimit City have slightly shifted their approach, but is this a good or bad thing? That’s why we’re here, to give you that final answer and to provide you with an honest insight into the new Road Rage slot.

There are multiple reasons why Road Rage is different compared to other stuff Nolimit City have released in the recent past. First of all, it’s a 5 by 3 slot, which is a classic layout. Nolimit City always like to crazy with xWays and xNudges, using expanded game layouts, but this is not the case on the Road Rage slot. The presentation is also quite mild. We get a road, which holds the reels and some other bits and bobs, but graphically, the style of this game reminds us of products that Nolimit City released when they just came into the scene. We’re so used to these special presentations that this one feels very basic, even though it’s not. The sound department also doesn’t impress, the audio is actually a bit of a mess. 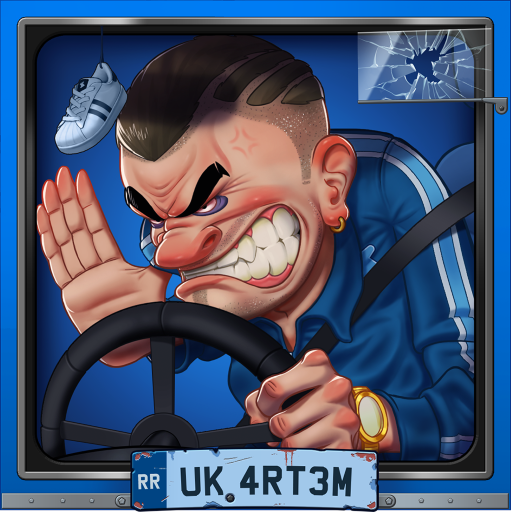 Of course, the design team hasn’t fully strayed away from the roots, as the characters or symbols of this game still are wild. Our five drivers are eccentric, to say the least, and they’re surely full of rage. Low symbols are car-themed objections such as a mirror, air freshener, tire, phone and a takeaway coffee cup. Road Rage slot has up to 259 paylines. There are a couple of other special symbols but more on those a bit later.

Alright, visuals are one thing. It’s an important aspect of every video slot, but we also highly have to consider the actual game model and payouts. Once again, Nolimit City are known to provide games with absolutely stunning win potentials, so are we taking a step back with Road Rage? Fortunately, that is not the case, as Road Rage can still muster up a 36,000x max win. It’s a highly volatile slot, although it’s not as volatile as other popular Nolimit City games. The RTP on Road Rage is 96.03%. Everything else is rather straightforward.

Cars are coming in as Wild symbols on the Road Rage game. There are three Wild Cars with each providing a different modifier:

Yellow Car - increases all other symbol sizes by one on the same reel
Green Car – drives from left to right, increases the multiplier by 1x for all symbols it drives over. It leaves a Wild where it stops
Red Car – same as the green car just drives from right to left

A traffic light is the scatter symbol of the Road Rage slot. You need to land 3, 4 or 5 scatters to trigger one of the following bonus features. Bonus feature modes mostly vary by their row size. Before the bonus game begins, an additional Rage Buff feature is triggered. Cars move across the grid, potentially unlocking more free spins or multipliers.

Exclusively to the bonus game, we also receive some Mystery symbols. Only one Mystery symbol per reel can land, and it reveals one of the three colours. If the color matches a car, it increases the car’s multiplier. If there is no match, then just a +1 spin is added. Road Rage bonus feature can also be purchased. 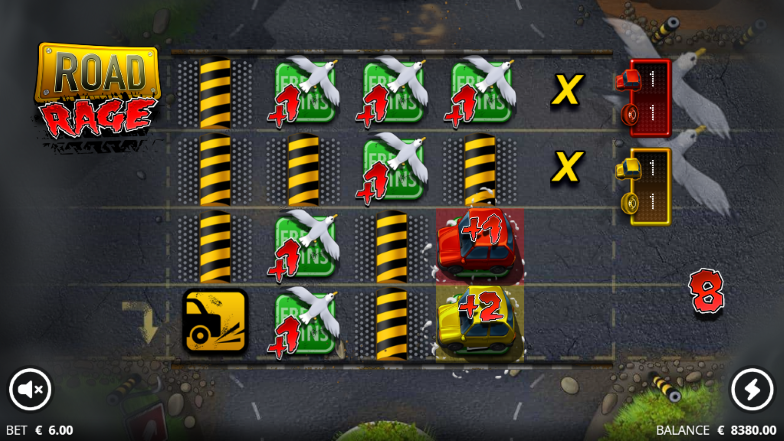 Where to start with this one. It’s a good casino game, but it’s a bad Nolimit City game if that makes sense. This is a company that has brought us some insanely good and strong video slots, but Road Rage just doesn’t hit the same way. Sure the potential is there and it comes with various features, but the game just doesn’t deliver that same standard that we are always expecting. If this was one of the first Nolimit City game’s then everything would be fine, but after slots like San Quentin, Tombstone RIP, Mental and Bushido xWays, this one just doesn’t stand close to the same quality. In one of the reviews, we once brought up this question – after such a long streak of stellar games, when Nolimit City will drop the ball? It seems that day has come, but we’re sure that something more spectacular is just around the corner.

Can I try out Road Rage for free?

Yes, you can play this slot for free, using the available demo player.

What is the max win on the Road Rage slot?

What is the minimum bet I can place on the Road Rage slot?