Power of Gods™: Hades comes as the third slot in the Power of Gods series. Its predecessors are Power of Gods™: Egypt and The Pantheon. Wazdan truly impressed us with the Power of Gods™: Egypt slot, so we are coming into this review with high expectations. Players will need to cross the Styx river, for their passage to the underworld. This is where we will meet the dreadful god of the dead, one of the mightiest of the Greek deities – Hades. Players will have to endure the hellish flames and rough nature of the Underworld. After all, this is where all the bad folk go, so it’s definitely not a pretty place.

Including Power of Gods™: Hades, this is the 8th consecutive Wazdan slot that uses the Hold the Jackpot bonus feature. We think it’s safe to say, that this is the new favourite feature for the provider. These sorts of bonuses have always been popular, but eight slots in a row? If it’s not broken why fix it, right? Wazdan have a pretty lengthy list of slots, although a good portion of them are quite outdated, there are also plenty of exciting and new slots. Is Power of Gods™: Hades the best slot in the series? Stick around to find out.

Wazdan definitely didn’t sugarcoat their presentation of the Underworld. It’s a dark and grim place, a place where you usually wouldn’t want to be in, but this time we have to make an exception because jackpots are on the line. It seems like a desolated space, with only hills and dead trees there for the scenery. The music further enhances this bleak atmosphere that Power of Gods™: Hades creates. The 5 reel layout is stationed between dark marble pillars, which are decorated with skulls and horns. This truly is a scary place, which means that Wazdan have done a great job on the presentation.

If we continue to inspect the visuals, then we need to take a look at the game symbols. As usual, we don’t expect much from the low symbols, but on Power of Gods™: Hades they are quite nicely made. These are J, Q, K and A. The high symbols leave us a bit torn, because they do look nice and fitting to the theme, but some of them seem quite “cheap” and unauthentic. We are not sure if that’s the best way to describe it, but you should get the idea when you see them. Starting from the lowest we got a Spartan style helmet, a spear, a key, the Cerberus and the Ferryman, who takes all the lost souls to the Underworld. The Wild symbol is Hades himself. Power of Gods™: Hades comes with 243 lines. 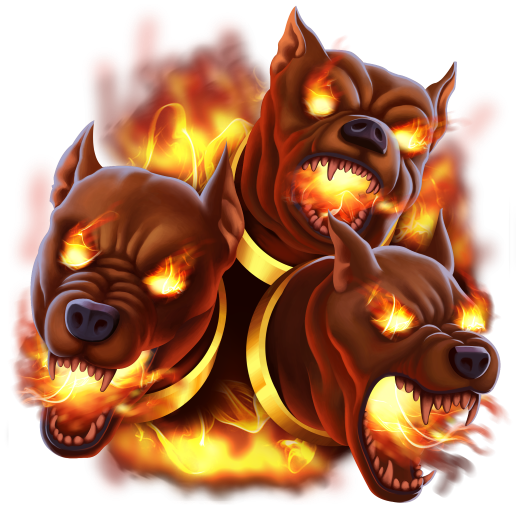 All modern and even some older Wazdan slots come with selectable volatility, meaning that you can freely choose between playing with low, medium or high volatility. This will affect the frequency and magnitude of the wins. For an easier going and predictable game, you should go with a lower option, while for a riskier but more rewarding option you should go higher. In either case, the RTP remains 96.14%. The biggest single win on Power of Gods™: Hades is 5,000x. This is more than we had on The Pantheon, but less than we have on Egypt. The bet range is 0.10 – 100, which brings no objections from our side.

To add a little flair to the main game, Wazdan have implemented the Multi Level Wins. This is simply a form of tumble mechanism, where the winning symbols disappear, allowing new symbols to fall into their place, which means multiple wins with a single bet. The main attention goes to the Hold the Jackpot feature because this is where we create those huge wins. You will need at least 6 scorching Bonus symbols to activate this Power of Gods™: Hades bonus. Some Bonus symbols come in a sticky variant. These symbols stick to the reels for 5 re-spins, thus increasing your chances to land the additional necessary bonus symbols. Hold the Jackpot is played on a new layout, where only special symbols can drop. Players are given 3 re-spins which reset with each Bonus symbol. These are the following symbols that can land during the Hold the Jackpot bonus:

Mystery symbols are revealed only at the end of the bonus. Completely filling the game layout with bonus symbols grants the Grand Jackpot of 3,000x.

While we were playtesting, within 10 spins we managed to trigger two Hold the Jackpot bonus features. Both of them resulted in Grand Jackpots, so we managed to score over 6,000x with less than 10 spins. Either we got super lucky or the game is yet to be updated before the final release. Nonetheless, we are looking at a slot with massive potential. Power of Gods™: Hades may offer a bit smaller payouts if compared to Egypt, but it’s the hit rate that seems to balance things out, although in the current state it seems like the balance greatly favours the player. Visually, it is an impressive slot, but we think we enjoyed the Power of Gods™: Egypt presentation a bit more. Overall, both slots are great and worthy of a spin.