An explorer name Jeanette is tracking down treasures left over by the fire phoenix. This quest takes us to deep jungles. This might be the first such adventure for Jeanette, but for us, it’s another day in the park. Thunderkick themselves have explored the idea of mythical creatures more than once in their Beat the Beast slots. Some things are just too dear to let go, so welcome another magnificent creature in the Phoenix Paradise slot. We have prepared an in-depth review of the Phoenix Paradise casino game, to find out if this casino game is any good and if you should consider playing it.

In general, we can say that we enjoy the products that Thunderkick offer. Their games have a nice design and most of them are fun to play. This company is also fairly creative with its slot themes, although Phoenix Paradise is more on the basic side. There are a lot of Phoenix-themed games and there are also a lot of games that take place in a jungle. That might not sound like an overly enthusiastic intro, but Phoenix Paradise has some gameplay elements which hold our interest. Let’s take the beast by the tail and explore Phoenix Paradise.

We hope you enjoy the green colour because the majority of the screen is filled with leaves, and plants – green jungle nature. The 5 by 3 layout itself is seemingly made out of stone. Phoenix Paradise reminds us a lot of those typical Aztec slots. Jungle scenery combined with stones or statues. In all honesty, we are a bit tired of such a design, but in this case, we don’t want to say anything overly bad, because Phoenix Paradise looks alright. There are some fiery golden effects when you interact with special symbols, so it’s not all plain either. There is also an adventurous soundtrack added to the game. 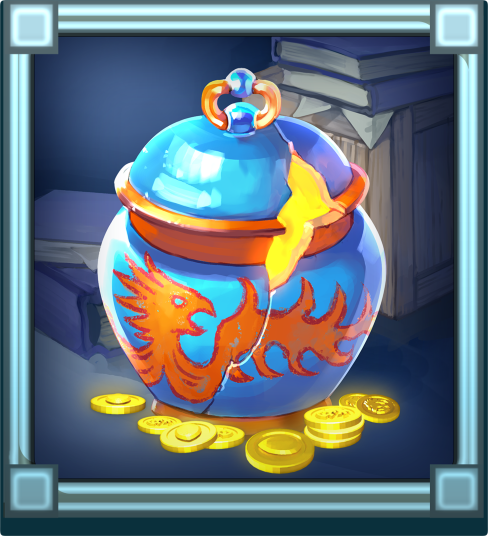 Blocks of 9, 10, J, Q, K and A work as low symbols on Phoenix Paradise. Additionally, to the 6 symbols, we also have 4 high symbols of a dagger, urn, crown and the explorer. There are also two special Phoenix symbols and Phoenix eggs, which work as scatters. This casino game has 15 paylines, so fairly textbook so far at least. The blockiness of these symbols really does remind us of a majority of Aztec slots, but as we said, it’s not the end of the world. The design of high symbols is nice, and definitely captures the style of Thunerkick.

Thunderkick isn’t in the same pan as the highest-tier providers such as Nolimit City, Big Time Gaming and NetEnt, but the payouts that these slots bring put some of the big studios to shame. On Phoenix Paradise, you may score a win up to 10,000x. If this is the treasure that Phoenix is hiding, then we can understand why Jeanette decided to take on this journey. Accompanied by a nice 96.13% RTP, Phoenix Paradise offers a truly solid payout model. You may play this slot on all smart devices.

Wild symbols on the Phoenix Paradise slot are a bit more special than usual ones. Apart from substituting for regular symbols, these Wilds may also multiply the payline win. This depends on the number of Wilds that are included in a win. For example, one Wild adds a 2x multiplier, while 3 or 5 Wilds multiple the total win by 8x and 32x. This isn’t that common of a mechanism, so we are glad to see it implemented in Phoenix Paradise.

Next up, we’re moving to the Mystery Wild Activation. This feature triggers randomly and It transforms all Wilds into Walking Wilds for the remained of the round. This will trigger a respin, as the Wilds will move across the playing field. Once they get to the leftmost side, they fall off and the feature ends.

If you’re serious about finding the Phoenix treasure, then have a look at the Free Spins bonus game. Three Phoenix eggs (scatters) will award 8 Free Spins. During Free Spins, all Wild symbols will always be Walking Wilds. Each 3 additional scatters will award 4 free spins. You can also buy this Phoenix Paradise bonus feature, by paying 100x of your bet. 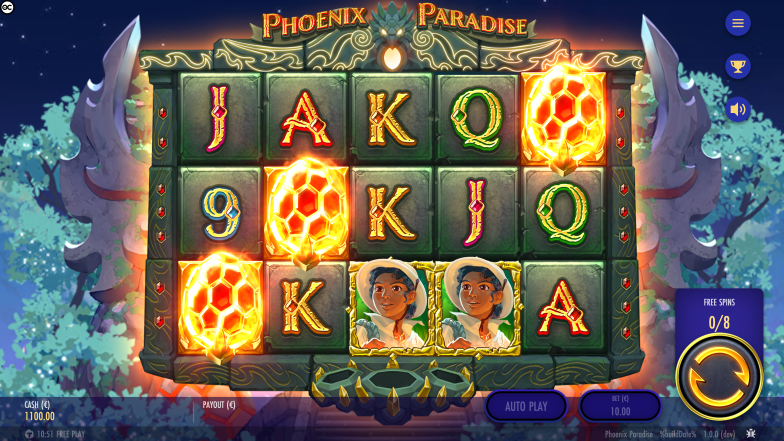 We have to be honest, the name of the game and the scenery that we see is as generic as can be. It looks fairly nice, but we don’t think that Thunderkick needed to poke around their brain to come up with this theme. Visuals aside, Phoenix Paradise offers a nice gameplay model and appealing payouts. Features on Phoenix Paradise are heavily focused on Wild symbols and the way that can interact with paylines and the game layout. Even though Phoenix Paradise doesn’t bring anything new to the table, we can see why some players will find it appealing.

Can I play the Phoenix Paradise slot for free?

Yes, you may play Phoenix Paradise for free, once the official demo is published.

What is the RTP on Phoenix Paradise?

Why can’t I buy the Free Spins bonus?

If buying the bonus option doesn’t show up for you, then it is prohibited in your playing region.