Video slot masters NetEnt are back in full force. We got a new title that seeks its inspiration from a much older release. NetEnt brushed aside the dust and decided to revisit Pyramid Quest for Immortality, which originally came out in 2015. It’s a slightly strange sequel in the sense that the original Pyramid slot wasn’t a huge hit. Maybe NetEnt felt that it should have been, that’s why they are giving it another shot. Whatever is the real case, Parthenon Quest for Immortality is here. Some of the gameplay mechanics closely resemble the original title, but the setting is new, which this time is Ancient Greece.

Parthenon itself is a temple in the middle of Athens dedicated to the goddess and the protector of the city Athena. Plenty of excavations have been made and no new wonders have been discovered for quite some time now, but maybe the Parthenon hides something magical or perhaps the Quest for Immortality is just a figure of speech. The most striking thing is the game layout, which is 4-5-5-5-5-4 symbols per reel. Not necessarily an innovation, but an uncommon sight for sure. Greek gods are here to tell another epic tale, care to join in?

NetEnt definitely are one of the top providers when it comes to presentations. Honestly, it’s quite hard to take the Ancient Greek theme and turn it into something great, simply because there already are so many of them, so what new can you possibly show. Parthenon Quest for Immortality is mesmerizing. The wonderful vocals combined with the dramatic music, create a Hollywood worthy soundtrack. The large game layout, which touches the sky, is beautifully made out of marble. Zeus and Athena stand on both sides, each gripping their iconic symbols. It’s safe to say that NetEnt have produced one beautiful slot. Parthenon Quest for Immortality is one of the better looking Greek slots on the market right now. 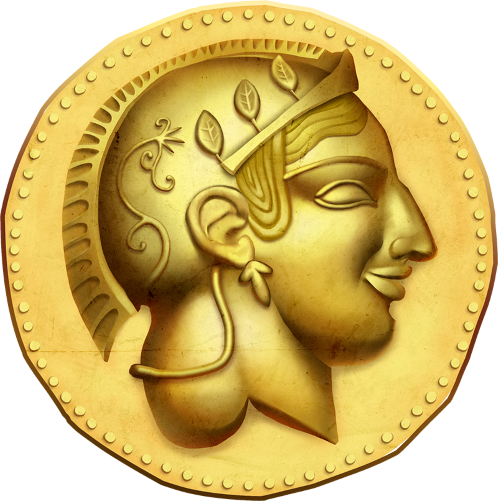 Parthenon Quest for Immortality is a cascade slot, meaning that all the winning symbols are replaced by new ones dropping from the top. NetEnt also like to call this the symbol Avalanche. The symbols keep the Greek influence strong. 10, J, Q, K and A low symbols are elegantly styled in a colourful marble with golden trims. The high-value symbols are different sigils, representing gods or creatures or objects from mythology. Beginning with the lowest, we got the Poseidon’s spear, a Serpent, Pegasus, a Trireme and a golden Medusa. This Medusa symbol is miles ahead with its payout value, sporting 40x for 6 symbols, instead of 2,5x which we get from the second-highest symbol.

Thanks to the cascade, we got many ways to go. Parthenon Quest for Immortality has got 10,000 paylines. Symbols are matched from the leftmost side in any position on adjacent reels. The special game layout truly takes this slot to another level. Medium volatility provides a balanced flow of wins. Parthenon Quest for Immortality is a pretty fun slot to play because of all these factors. The slot can be enjoyed on all devices. The bet range that you can use is 0.20 – 200.

A unique Parthenon Quest for Immortality feature is the Wild Generation Zone. On the upper left side, you will spot a W that represents the Wild symbol. Whenever the top row symbols are involved in a win, they turn into wilds, instead of just disappearing. After a successful wild win, they disappear as any other symbol would. 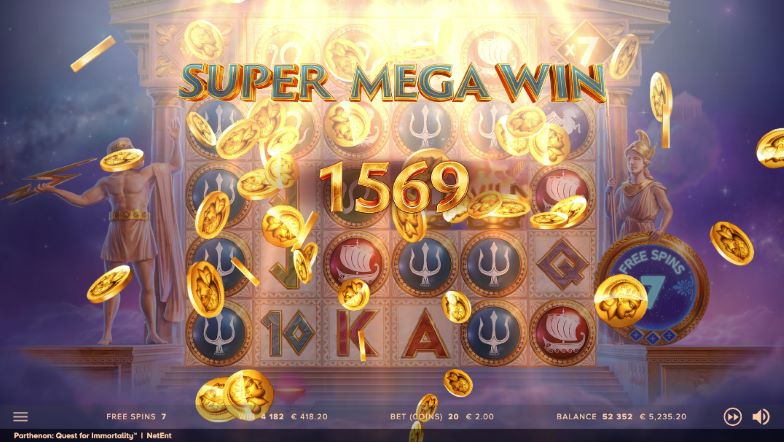 To gain access to Free Spins, players will need to land 3 Free Spins symbols. The award is 8 Free Spins, but 4 additional Free Spins can be gained for each new scatter. During free spins, the total multiplier, which is located on the upper right side increases after every turned wild. Basically, Free Spins work in tandem with Wild Generation Zone. The multiplier stops at 20x.

Initially, players will be drawn in by the euphoric visual and audio presentation. We stand by the words, that Parthenon Quest for Immortality is one of the prettiest Greek-themed slots we’ve seen in a good while. Besides the golden medusa, the regular symbol payouts are on the low side, which makes the main game quite bland. The cascades and multipliers draw some parallels with the Megaways gameplay mechanics, but obviously, this is a much different experience. In general, it’s a pretty good game from NetEnt, but does it have a long shelf life is a whole different topic.