The mighty forefather of Norse mythology is gracing our screens once more. The one-eyed raven is bringing us to Mimir’s well or how it is known originally Mimisbrunnr, which is located beneath the world tree Yggdrasil. Norse mythology is rich with magical tales so Odin’s Gamble is a good way how to distribute this wealth. The waters of the well contain the knowledge of the whole world, this is also the place where Odin acquired his wits himself. We are here to see if these myths hold some actual value – value that comes from dazzling slot wins.

By now you could or should be familiar with Thunderkick products. If not, then they are responsible for such slots as Big Fin Bay, Beat the Beast and Crystal Quest. Most of the time, Thunderkick produce excellent quality slots, so each new release is quite an exciting occasion. Thunderkick are also no strangers to mythology, having produced many games, which play around these mythological ideas. Can Odin’s Gamble match the success of its predecessors? Only one way to find out.

Nature meets fantasy on Odin’s Gamble. Visually, it is a striking slot. The beautiful Nordic pastures are mixed with backdrops of spruce forests and tall mountains stretching across the horizon. Thunderkick have certainly painted a pretty picture. The extended 6 by 4 game layout is framed by an intricate Nordic design, almost giving off Sci-fi vibes. We feel like a lot of these slots were influenced by Marvel’s portrayal of Midgard, which doesn’t exactly go hand in hand with the original tales and myths, but it does have an appealing look to it. 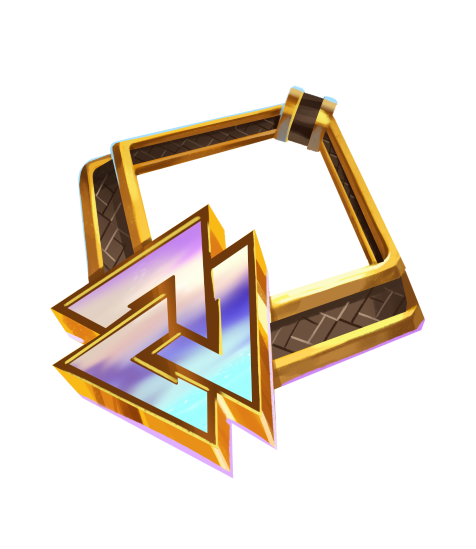 Odin’s Gamble symbols continue this trend of mixing mythology with modern fantasy. Low symbols are standard 9, 10, J, Q, K and A. Symbols with higher values depict various items or in this case treasures. Here you will find rings, necklaces, horns and other bits and bobs. Together there are 6 lows and 6 highs. There is also a good chance of landing Wilds, which substitute for any non-special symbols. During the base game, Wild appear with a 2x multiplier. Odin’s Gamble comes with 466 paylines.

Forefather, the tree of life, Midgard – it all may sound a bit intimidating, so we are expecting payouts that can match the story. We can say quite safely that Odin’s Gamble can bring some intensity. This medium-high volatility slot can produce a win up to 19,333x. Now that’s worthy of gods. There are four RTP variants for Odin’s Gamble, the best one is 96.17%. Odin’s Gamble bet range is 0.10 – 100, so plenty of betting strategies are open for use. Like any Thunderkick slot, Odin’s Gamble is well optimized for all devices, including mobiles.

If the fortune strikes, then during your Odin’s Gamble play session you might trigger the Sticky Win feature. This feature locks in all the winning symbols, while triggering a respin with them. Each new symbol of the game sort gets added to the sticky combinations, hence triggering another respin. These respins stop until no new symbols are added. 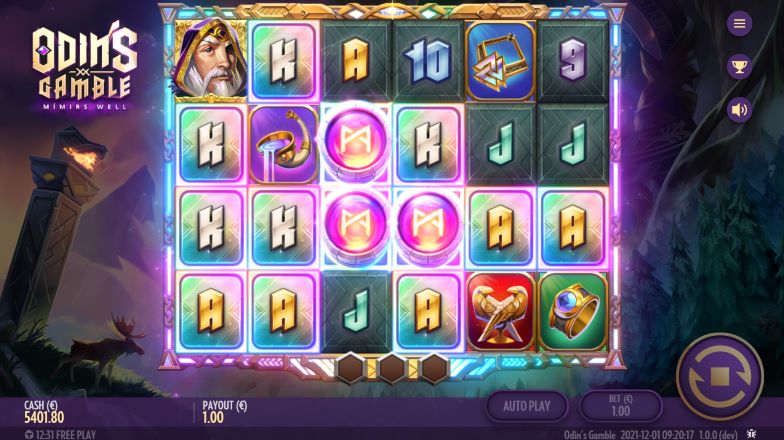 Odin’s Gamble Bonus Game brings many wonders, but before we get ahead of ourselves, we’ll need to land at least 3 scatters. Once that is done, 10 Free Spins shall be rewarded. Every 3 extra scatters during Bonus Game will add +5 Free Spins. During the Bonus Game, the Sticky Win feature triggers on every win. Additionally to that, we get a Roaming Wild, which covers the whole reel and randomly moves places on every free spin. Regular Wilds turn into Charged Wilds, but the 2x multiplier still remains. Whenever these Wilds land, their multiplier gets added to the Wild Stack. This multiplier doesn’t reset, so you can only grow it as you play. 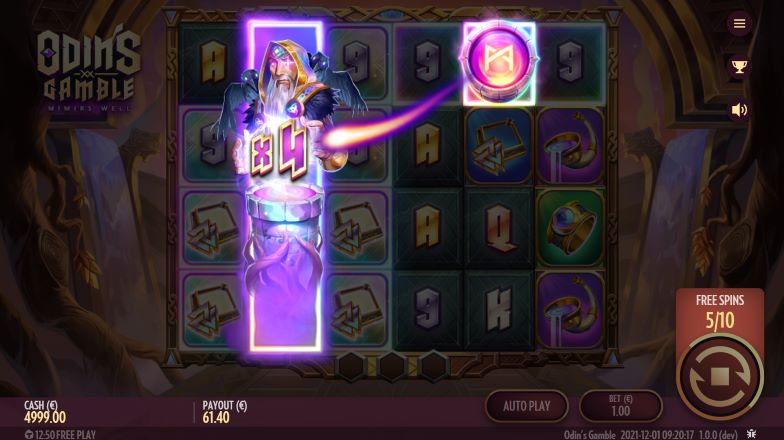 Trading in his eye for knowledge, Odin really pulled the ultimate gamble move, but when it comes to us - players, we’ll only need to trade in a couple of bets for some nice potential wins. In many ways, Odin’s Gamble is a well-polished game. Thunderkick have created a wonderful presentation, paying their respects to Norse mythology. The good news doesn’t stop there, as this game is capable of providing some top-class wins. The best possible outcome can be 19,333x, so that alone can persuade players in giving Odin’s Gamble a shot. We also have to give praise to Odin’s Gamble bonus features. These “enhanced” wilds add another dimension to the game and they make the main game more exciting. No longer you’ll need to sit through the main game with bare minimum action.

How can I get Odin’s Gamble Bonus Game?

How volatile is the Odin’s Gamble Slot?

The volatility for this slot is in the medium-high range.

What is the Odin’s Gamble max win?