The world-famous TV series “Narcos” once again makes its appearance in the slot industry. As many of you may know, the original Narcos slot was released by NetEnt in 2019. Due to this show’s popularity, the Narcos slot saw a lot of playtime, but some argue that it didn’t live up to those initial expectations that many of us had. By all means, it still was a wonderful game so seeing a sequel to this slot makes us quite excited. The same way it was on Netflix, the regular Narcos are followed up by Narcos Mexico, so if you enjoyed the story of Guadalajara Cartel more, then you may also find this release more appealing.

If you’re a bit confused on why Red Tiger are creating a sequel to a NetEnt slot, then let us remind you of the deal that two companies had in late 2019. For a whopping 220 million pounds, NetEnt agreed to an acquisition of Red Tiger, hence both of these studios began to work very closely. Now once more you have to throw yourself into this wild war of cartels. The stakes are high and the winner takes it all. Do you have what it takes to deal with Narcos of Mexico? We shall see.

Just like the game before it, Narcos Mexico has that Latin flair that just makes you want to pour a glass of tequila, while you lean back in your office chair, plotting your next way, as you always need to be one step ahead of your rivals. Perhaps, we are the ones that are getting ahead of things, but what we’re simply trying to say is, that Narcos Mexico is wonderfully presented. If you liked the atmosphere of the TV show, then this slot will be right up your alley. The game layout is also similarly designed to the previous game. We got those same, tall symbols laid out on a 5 reel setup.

Many beloved and perhaps some hated characters from the show are making their appearance on Narcos Mexico. The low symbols again are 10, J, Q, K, A and behind them we have various scenes that depict the brutal lifestyle of narcos. Bullets, guns, skulls, you get the idea. High symbol positions are, of course, occupied by the show’s characters. Here you will meet El Chapo, Amado and some other guys from the crew. Red Tiger have preserved most of the visual style from NetEnt, so Narcos Mexico definitely doesn’t look like your typical Red Tiger slot.

You know how these things go, whenever we get a direct sequel, we like to compare both payout models to see, if some improvements have been made. Narcos was a nice slot, but it didn’t blow our minds with its payouts. Narcos Mexico makes significant upgrades in this regard, as now the max win is 10,486x, compared to the previous 1,506x. Narcos Mexico is also a bit more volatile which tends to go hand in hand with larger payouts. The RTP has dipped a bit, but not so much to cause concern. You can play Narcos Mexico on any smart device.

Just like before, some random modifiers may trigger during the base game. On Narcos Mexico these are called Supply Drop and Double Cash. The Supply Drop feature drops in multiple Wild symbols, while Double Cash awards a 2x multiplier to your winning spin.

The main bonus feature on Narcos Mexico is Cartel Spins. The traditional way to get this bonus is by landing 3 Cartel Spins symbols, but alternatively, you can gamble any regular win ranging from 30x to 100x for a chance to win 3 Cartel Spins. This bonus feature comes with a new 10 by 10 layout, where only select symbols appear. In each corner of the layout, you will also spot 4 cartel leaders. Whenever a symbol lands next to a leader, your spin amount resets back to 3. These are the special symbols that you will find on this Narcos Mexico bonus game: 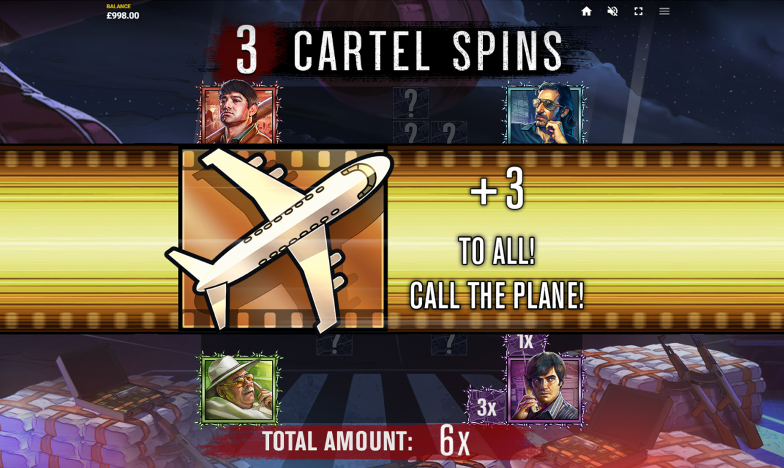 NetEnt is one of the biggest names in the slot industry, so it is quite hard to topple their product with something better. In this case, Red Tiger have done just that, creating a better version of Narcos. Of course, there will be players that disagree, but pretty much all previous shortcomings have been improved, at least marginally. We once again get that lovely presentation, that Narcos fans are so fond of. Additional minor features are fun and the main bonus game is even better. Payouts have been significantly increased, so we are quite impressed with this delivery from Red Tiger. Narcos Mexico online casino slot gets our seal of approval.

Can I play Narcos Mexico slot for free?

Yes, you can play Narcos Mexico for free, once the official demo version is published.

How many paylines there are on Narcos Mexico?

Narcos Mexico is a slot with 243 paylines.

What is the max win on Narcos Mexico?

Princess Sakura is back! She has set out to find the mythical swords, which hold the powers of a demon. Embark on this magical journey.

It’s time to abandon the world as we know it and join the true Apache Way. Find the spiritual awakening with the tribe