It almost feels like 90% of slots, that choose Mexico as the main location, are themed around the Dia de Los Muertos or the Day of the Dead, of course, if we put Aztec slots into another category. So yes, today we will be looking at another such slot, called Muertos Multiplier Megaways. The last bit of the name gets us especially excited, because, obviously, Megaways slots are rather exciting, especially if they are produced by Pragmatic Play. Dia de Los Muertos is a beautiful celebration, and it’s very important to the Mexican people, so no doubt, at least visually, Muertos Multiplier Megaways will be beautiful, but we also want to see, how well does it perform and what sort of payouts can it bring.

The amount of Megaways slots that Pragmatic Play have produced is now well into double digits. Pragmatic have easily become one of the top dogs, when it comes to these games and fans have voiced their approval for a while now. Muertos Multiplier Megaways is a shining new slot and we’re quite interested to see, how will Pragmatic present this wonderful celebration. Megaways slots usually bring some extra attention, so we’re sure a lot of players will be keen to learn more about the Muertos Multiplier slot.

Perhaps a bit cliché, but Muertos Multiplier Megaways fully embraces the Mexican spirit. The visuals take a lot of inspiration from Dia de Los Muertos but not fully because we also have tacos and chilli sauce as some of the games’ symbols. To describe the scene, well, first of all, we seem to be visiting a little Mexican village. There are a couple of buildings in the back and there are also some skulls, flowers and candles scattered around. There are some Dia de Los Muertos slots, that have left a bigger impression on us, but Muertos Multiplier Megaways doesn’t look bad, not one bit. We also get a jolly guitar tune in the background, so that might lift your spirits. 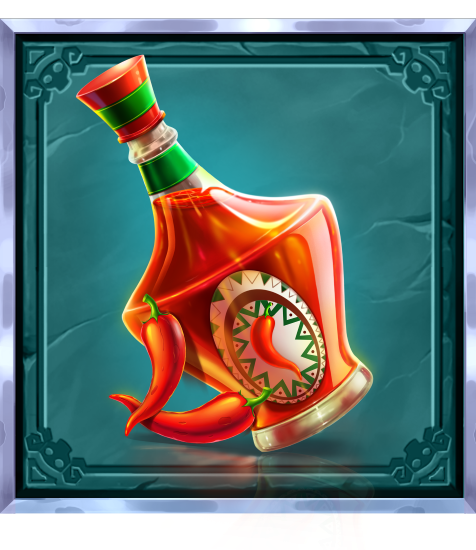 If we take a closer look at Muertos Multiplier Megaways symbols, then we will see that the paytable consists of 10 regular symbols. Additionally, there is also the Wild symbol which can carry a multiplier of 2x or 3x. Low-value symbols are card suits and high-value symbols are some Mexican-style objections, a few of which we already mentioned, so you will also find some nachos and cactus to fully confirm the fact that we’re in Mexico. Being Megaways slot, this game can produce up to 117,649 paylines. Another classic Megaways feature is the cascade, so every time a win is made, the winning symbols disappear, creating space for new ones to drop in from above.

Keep an eye out for burning chillies, as these Bonus symbols trigger the Free Spins feature. You will need at least 3 of these symbols to activate the bonus game. The number of Free Spins varies between 5 and 14, which depends on the Bonus symbol amount and RNG. If you get anywhere below 14 Free Spins, you can also choose the gamble option, which can either award more Free Spins or leave you empty-handed. This brings back some Extra Chilli slot memories. The player is always favoured to win the gamble, so percentages are being kind to you. Typical to Megaways, each win during Free Spins adds a +1x multiplier. Multipliers do not reset and they are also collected from the Wild symbols. Retriggers are possible. For a reasonable sum of 100x, you may purchase the Muertos Multiplier Megaways feature straight away. 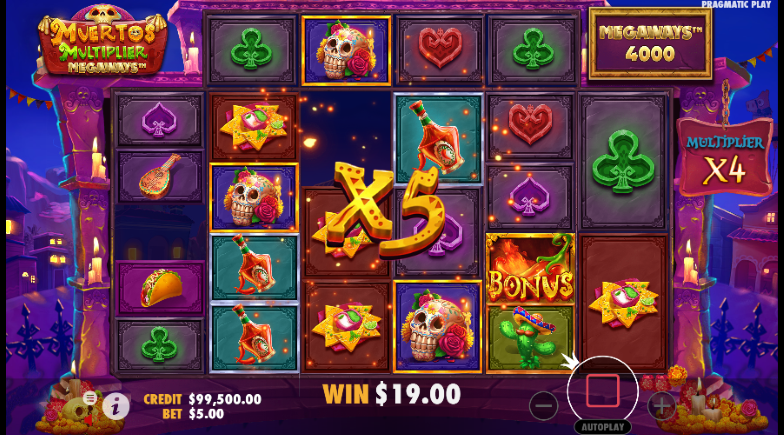 It’s a bit strange how Pragmatic Play have made a Dia de Los Muertos slot, but then additionally they have thrown in some cliché Mexican foods, which have no real connection with the celebration. Other than that, the game looks good and it more or less provides the typical Megaways experience, which is never a bad thing. It’s colourful and lively and it performs like a well-oiled machine, Muertos Multiplier Megaways is a wonderful slot to play when you want to liven it up a bit.

Which other Pragmatic Play slots I can play on the SixSlots website?

You will find many Pragmatic Play slots on SixSlots. We recommend having a look at Bomb Bonanza, Sugar Rush and Zombie Carnival.

What is the minimum bet on Muertos Multiplier Megaways?

When is Muertos Multiplier Megaways available in online casinos?

The official release date for this casino game is the 13th of October 2022.

Move out the way lion, there is a new king of the jungle. Head deep into the jungles, in search of the mighty gorilla