We’re continuing our yearly traditions with another festive Christmas slot. Perhaps, the most famous princess trio in the world of video slots is back. The original Moon Princess slot came out in 2017. Since then, it has become one of the most played Play’n GO slots, besides the likes of Book of Dead. The dazzling charm of princesses is still alive, although now with a touch of Christmas spirit. Our task is to find out if this new Moon Princess Christmas Kingdom slot is just good for Christmas or the whole year around.

Play’n GO hasn’t just reworked visuals, they have also spent some time on the game mechanics. The Christmas Kingdom still holds that Moon Princess charm, but the lovely Christmas presentation makes it relevant to the upcoming festivities. One of the highlights is the max win potential. This payout has now tripled, so all the previous Moon Princess fans will be delighted with this news. Is the overall experience better than the one on the original Moon Princess? Let’s find out the answer to that question right now!

Unsurprisingly, both slots share a lot of similarities in their looks. The general UI feels a bit nostalgic, but it’s also not a complete copy/paste from the previous game. Of course, the Christmas element is much stronger as we can see loads of snow, which covers all the spruce trees and hills. Also, now the game characters have a stronger 3D effect. We’re not sure if this is positive, as the character models look a bit strange, but otherwise, these are the same princesses that we had before. Another thing returning is the 5 by 5 game layout. Even though the new Christmas Kingdom slot looks decent, we still prefer the classic presentation. 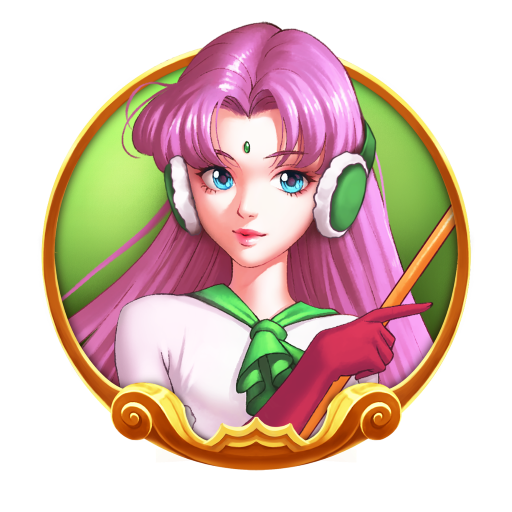 Instead of typical stars and hearts, all Moon Princess Christmas Kingdom symbols have a festive design added to them. There are 7 regular symbols in total. Four of these are decorations such as a bell, heart, star and a bauble. The three high symbols are three princesses. Thankfully, these symbols maintain the original style of art, instead of using that strange 3D effect, which we weren’t big fans of. The size of the layout and our previous experience with similar games already suggests that this is a cluster pays slot. At least 5 symbols need to be combined to form a winning cluster. The moon symbol is the Christmas Kingdom Wild.

One of the biggest changes has been the implementation of clusters, but that is not the only big change that we got. The max win has been tripled, so instead of 5,000x, the max win can go up to 15,000x. The RTP is a bit worse, but only by 0.30%, so the difference isn’t huge. Different RTP variants exist, but these are the highest possible options. Both slots, of course, provide a high volatility gameplay model and a bet range of 0.20 – 100. Moon Princess Christmas Kingdom runs well, same as any other new Play’n GO slot.

On each spin, 5 random grid positions will be marked with mistletoes. A win that includes one of the positions will get an added 1x multiplier. This multiplier can increase with each consecutive win, thanks to the cluster mechanism. If you don’t follow up with a win, then the multiplier resets.

Three princesses are the leading characters for this game. They are also responsible for one of the main bonus features of the Christmas Kingdom slot. The feature is called Girl Power. This feature can also randomly trigger on any non-winning spin. Once this happens, one of the following modifiers will be activated:

Always keep an eye out for the three-tailed white fox. This is the Christmas Kingdom scatter symbol. Just a single scatter can trigger the Trinity feature. Your reward is 1 free game round where all three princesses will activate their powers. If you manage to completely clear the grid, the Free Spins feature is rewarded.

Moon Princess Christmas Kingdom Free Spins feature lets you pick between three bonus variants. During Free Spins, 10 grid spots come with the mistletoe marker, instead of 5, how it is on the base game. Love, Star and Storm Free Spins game begins with 4, 5 and 8 Free Spins respectively. A single scatter drop will add +4, +3 and +2 Free Spins following the same princess pattern. Fewer spins mean higher risk, but also a higher potential! 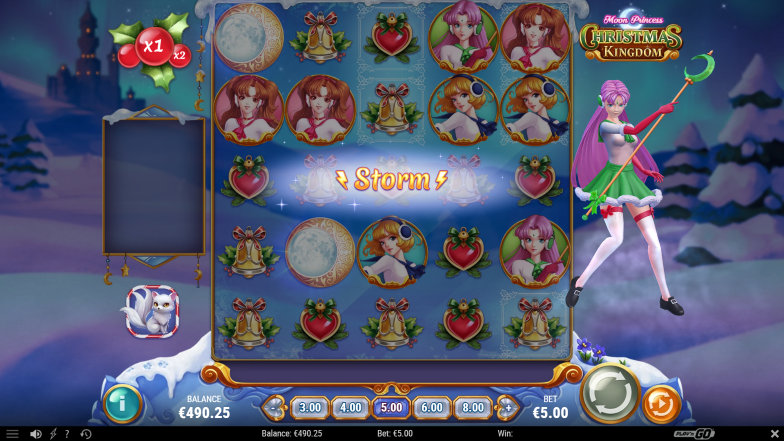 What is the Moon Princess Christmas Kingdom max win?

What is the Christmas Kingdom RTP?

Can I play Moon Princess Christmas Kingdom for free?

Yes, this slot can be played for free, once the demo player is available.