We’ve never felt the need to say this, but approach this slot at your own discretion. Nolimit City are known to produce slots with a more unusual and darker theme, but Mental seems to take it to another level, bringing in a whole horror movie type of atmosphere. Warriors Graveyard, San Quentin and Infectious 5 were all dark and a bit twisted in their own good way, but Mental most definitely is the darkest of them all. You never seem to know what you will get next from Nolimit City.

As the name suggests the action takes place in a mental asylum. Of course, not just any mental asylum, but one that has gone completely off the rails, housing some of the worst examples of humankind. If you watch horror movies on regular basis, then Mental will be a walk in the park for you, but for players that are used to simple Egyptian and fruit slots, Mental is definitely a whole different experience. You might want to turn on the lights because this one will get creepy.

Dark, twisted and other similar words can be used to describe the looks of the Mental slot. A run-down room with white tiles and flickering light is the background, which is something straight out of a horror movie. The creepy visuals are accompanied by an eerie soundtrack. We’ve seen our fair share of “horror” slots, but Mental might just top this list. The game layout is also a bit unusual, as the general 5 by 3 set-up can provide more than 15 symbols per spin. This provides more than 108 different ways to win. Nolimit City have seemingly abandoned the idea of ever producing another regular layout slot, which is okay, for the record.

The creepiness continues with the game symbols. 10 regular symbols are split into lows and highs. On Mental slot, these are called the Organ and Patient symbols. The low symbols are different human parts, sketched on an old piece of paper. Starting from the lowest we got a hand, kidneys, heart, brain and an eye. High symbols are five patients. Not a lot is known about them, but judging from the looks they aren’t doing too well. Mental slot also comes with a bunch of special symbols, which are involved with bonus features.

In many ways, Nolimit City like to go absolutely mental. They have also gone mental with payouts, although we are no surprised because Nolimit City is a provider that tends to consistently provide big payouts. The max win is quite devilish, going up to 66,666x. San Quentin is still undefeated in this area, but Mental is following closely by. Mental slot is filled with various features, so there are many ways how you can such a payout. The default RTP is 96.08%. Mental, of course, is an extremely volatile slot and we wouldn’t want it any other way.

As we said, Nolimit City don’t make regular slots anymore, that is also why almost all of their games are filled with different bonuses and features. The list is hefty, so let’s just begin. The most simple of them all is the Fire Frames feature. By a random chance, 1-13 positions can come with Fire Frames. All symbols within Fire Frames are split into two parts.

Continuing on, we got the Enhancer Cells which are located at the bottom of reels 2 and 4. These cells are activated with 4 and 6 Fire Frames respectively. These cells can reveal the following symbols:

• Patient or Dead Patient symbol
• xWays – these reveal 3 regular symbols of the same kind. All xWays reveal the same symbols
• xSplit – splits one symbol on each reel into doubles, while turning itself into two wilds
• Wild symbol
• xNudge Wild – a Wild full view Wild symbol, that always nudges to full visibility. Every nudge adds a +1 multiplier.

Another special Mental symbol is the Spider, which can land on the 2nd or 4th reel. This Spider triggers the Mental Transform. The Spider transforms into xWays, xSplit, Dead Patient, Wild or regular Patient symbol.

The first proper Mental slot bonus game comes from Autopsy Freespins. These are activated by 3 Scorpion symbols, with each Fire Frame adding +1 Free Spin. During this bonus phase, up to 5 positions, a spin gets the Fire Frame upgrade. These Fire Frames become sticky for the rest of the feature.

Lobotomy was a controversial procedure, which was done on some mental patients back in the day. Thankfully this practice has now been forbidden, but we can still feel the remains of it on the Mental slot. Lobotomy Free Spins are activated by 3 Scorpions and 1 Spider symbol together. Just as before, each Fire Frame adds +1 Free Spins. By default you begin with 9 Free Spins. Just like on Autopsy Freespins, Fire Frames become sticky, but additionally, we get a sticky Spider symbol, which triggers Mental Transform on every spin. Lobotomy Free Spins come with a Dead Multiplier rule. The highest value multiplier from Dead symbols is collected and the amount is added to the count. The multiplier is then added to new Patient symbols

We saved best for the last, as the ultimate bonus is the Mental Free Spins feature. To get this, you will need the full set of 3 Scorpions and 2 Spiders, which awards 10 Free Spins. Both Spiders become sticky, while Mental Transformations trigger each spin. The Dead Multiplier count doesn’t reset between spins. 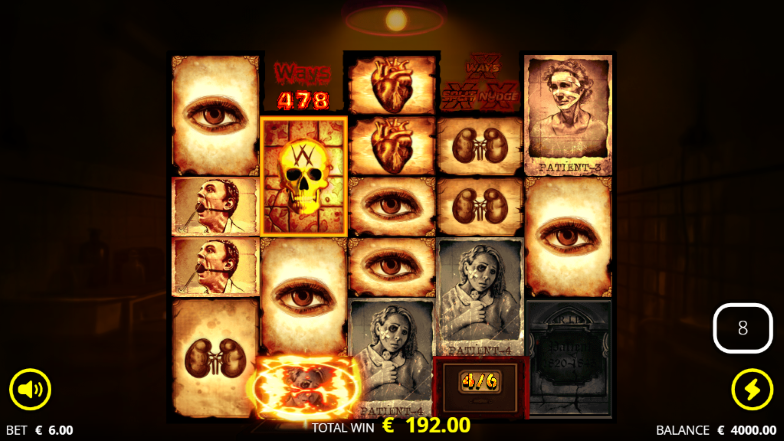 It’s crazy how many times Nolimit City have surprised us. When San Quentin was released, we already thought that it’s a brave approach, but Mental takes the cake by a long shot. It could very well be the creepiest slot we’ve seen, period. Even though the visuals take away the attention, we still have to applaud the game model. Mental is filled with various bonus features, creating a madhouse packed with fun. It may take some time to fully understand the game features, as the bonus game can get a bit complicated for a casual player at least. Nolimit City have certainly created something special, for various reasons.

Can I play Mental slot for free?

Yes, the Mental slot can be played for free using the demo version available on this page.

How to play the Mental slot for real money?

You can play Mental for real money on casinos, which you will find under the Online Casinos section.

Can everyone use the Bonus Buy option?

Bonus Buy option may be restricted in some countries, so be sure to read the Game Rules for more information.

Book of 99 is an innovative slot because it features 99% RTP. This is a very special and unordinary thing. Will it make a huge difference?