The streets are wild and crazy, as they’re ruled by the eccentric Cash Queen. It seems like dystopic cyberpunk style slots are becoming more and more popular in the industry. Still fresh in our minds are games like Nitropolis 3 and The Last Sundown. The list now grows bigger with the release of Mayhem, which is the latest slot from Red Tiger. A harsh new world with bare minimum laws is something that’s been explored plenty of time in various movies and games, but each producer has their own twist, so we are quite eager to see the thought process behind the team of Red Tiger.

More and more, Red Tiger have been exploring new and brave ideas, perhaps, steering a bit clear from the typical pirates and mythology slots. Narcos Mexico already showed us the gritty side of Red Tiger, so, perhaps, we can expect more such games from them.

For those who are familiar with regular video games, we would compare Mayhem visuals with Far Cry New Dawn or Borderlands. In other words, the world is vibrant and full of colours, which is something you wouldn’t really expect from a post-apocalyptic setting. Our leading hero Cash Queen is a bit similar to Harley Quinn, so we feel like Red Tiger have had multiple sources of inspiration for this Mayhem slot. The mayhem slot layout consists of 5 reels and 3 rows. 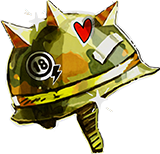 Red Tiger have kept it quite basic with the game symbols, so not a whole lot of anarchy is spotted here. The royals, starting from 10 to A give out the lowest payouts. The seniors, otherwise known as high symbols are giving off larger vibes of funkiness. These symbols are a golden dollar, helmet, grenade and a badge with lips on it. It all sounds quite random, but that’s just how it is with this Mayhem slot. With all that being said, Mayhem has a rather typical 20 payline setup.

Straight up looking at mathematics and stats of this game, Mayhem more or less seems like a regular Red Tiger slot. It has medium-high volatility (4/5), an almost average 95.71% RTP and a basic bet range of 0.10 – 100. The max win though is “just” 1,200x. On its own, it’s a great win to score, but considering, that it’s the ceiling of potential for this game, you may get a bit disappointed. These payouts don’t really go together with the expressive nature of this game, providing us with rather tame gameplay. The Mayhem slot can be played on all devices.

Our crazy lady is the Cash Queen and her symbol is a 1x3 Wild, which appears exclusively on the middle reel. Cash Queen always appears in her full size and when she’s part of a winning combination, she and other winning symbols are locked in place, while a respin for remaining positions is triggered. Each new winning symbol gets added to other locked symbols. These respins stop when no new symbols are added to the locked positions.

If you truly wish to embrace the wild wasteland, then you’ll be needing some Anarchy Free Spins. For starters, you need to land 3 Anarchy Spins symbols, which awards 10 Free Spins. This Mayhem bonus feature puts the Cash Queen in the middle, where it remains for the entirety of the feature. Like before, the Cash Queen triggers respins, locking in more and more symbols next to her. With each subsequent respin, the payline multiplier grows by 1x. At maximum, it can go up to 10x. There are no retriggers, but each additional Anarchy Spins symbol during the bonus adds +1 extra Free Spin. 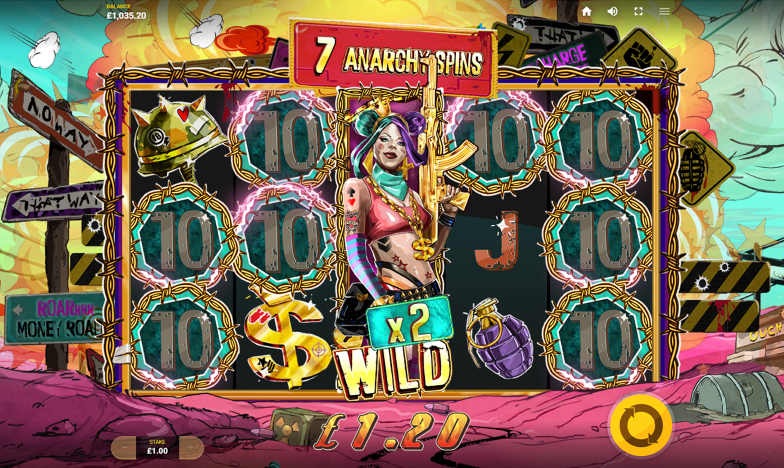 Mayhem looks like one of those crazy Nolimit City slots, but it looks a bit crazier than it actually performs. Red Tiger have managed to portray this futuristic dystopic world well, so it’s certainly an interesting move from Red Tiger, feels a bit unusual from their side. The basics of the game are just that, basic, so Red Tiger hasn’t fully followed the footsteps of Nolimit City, as their slots are well known for their features. The best thing about the Mayhem slot is the Cash Queen feature. It’s understandable and straightforward, but also very entertaining. Besides that, there is not that much that Mayhem can offer in the gameplay department and the potential is also rather thin, so we think that Mayhem is a decent slot, but we can’t also give it very high praises.

What is the RTP on the Mayhem slot?

When is the Mayhem slot released on online casinos?

The official release date for the Mayhem slot is the 12th of May 2022.

Can I play the Mayhem slot for free?

Yes, you can play Mayhem for free once the official demo is published.

Spirit of Egypt still lives, partly thanks to Playson. Various bonus features and jackpots are waiting for you.

The king always gets all the recognition but it’s the joker who gets the last laugh. Score some jackpots in the second K-Boost instalment.