There are many superhero organisations and teams. For example, we got Justice League, Avengers, X-Men and the list goes on. Superheroes are beloved by many and they also have made their way into the realm of video slots. This is not the first time we have had a superhero slot on this page, as we already enjoyed Infinity Hero and Reel Hero, but now there is another team looking across the horizon, scouting for any troublemakers. Meet your League of Wilds heroes. These resilient fighters will do their best to help you out, in this case, in a more monetary fashion.

Red Tiger have had a very close relationship with their partner Cayetano. Red Tiger have provided their services and Cayetano have used them well. We have seen a couple of nice slots from them, although nothing revolutionary as of yet. League of Wilds comes with some interesting points, that we are excited to cover. League of Wilds slot revolves around the idea of superhero wilds, with each variant bringing a different approach to the bonus. Let’s not keep our heroes waiting and get into the gameplay.

Where to Play Cayetano Slot for Real Money?

The most interest-worthy aspect of the game is the bonus features because the base game is rather simple looking. League of Wilds provides a futuristic/sci-fi experience. In the background, we can see, what seems to be, a spaceship of the main evil villain of the League of Wilds slot. Overlooking the earth, he is surely planning his next step, but we are here to stop it. All the action happens on a 5 reel 3 row layout. The music is a bit hit or miss so together with the overall presentation the game looks fine, but the most exciting part is yet to come.

League of Wilds is a 20 line slot, which is what you would expect from a 5 by 3 layout, so no extra comments here are necessary. League of Wilds symbols can be split down into 3 categories – lows, highs and special symbols. The low symbols are surely the least exciting, as these are just a simple set of 10 to A. In their defence, they are inside shiny gems, but we don’t think it adds much to make them attractive. Moving further, we got the highs which are 4 objects that belong to our four heroes. These are bracers, a bracelet, a crown and a shield. Keep on reading to find out the roles of each special symbol.

When it comes to League of Wilds payouts there are two main things to point out. First of all, League of Wilds doesn’t have a high single win ceiling, the best possible win is 1000x. The keyword here is single because the overall potential is great. Consistency is where League of Wilds excels, as it can provide great and continuous wins if you manage to get a good streak rolling. League of Wild 95.26% RTP is a bit low, but hopefully, it won’t affect the game too much.

Our four League of Wilds heroes are squaring up against the Evil Lord and his loyal minions. Cayetano didn’t give their heroes names, instead, they are recognized by their colours. To get anywhere, you will need to land a Star Wild, which drops on reel 1 to 4. Simultaneously you also need to get a minion or Evil Lord symbol on the fifth reel. Once this is done, the Wild Feature is triggered. The Star Wild will turn into one of the four heroes. Each hero has their own special set of skills:

• Red Hero – turns all instances of a paying symbol into Red Hero Wilds
• Purple Hero – expands into a 3 row-high wild, covering the whole reel
• Blue Hero – clones itself up to 5 times
• Green Hero – If involved in a winning line, it will provide a multiplier of 3x, 5x, 7x or 10x 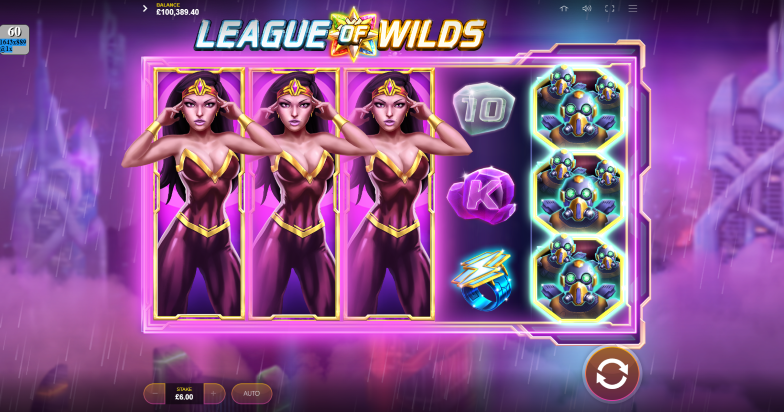 All of this was just something that you can score during the League of Wilds base game, so there is still the main bonus feature, which of course is the Free Spins. Now for League of Wilds Free Spins, you need to land 2 or more Star Wilds and the Evil Lord symbol on the 5th reel, so minions won’t suffice in this case. The reward will be 10, 15 or 20 Free Spins, respectively on how much Wild Stars you had, once the bonus was triggered. During the Free Spins bonus, the Wild heroes appear much more frequently. They also don’t require a minion or Evil Lord on the 5th reel, as the Wild heroes can appear independently on any reel. 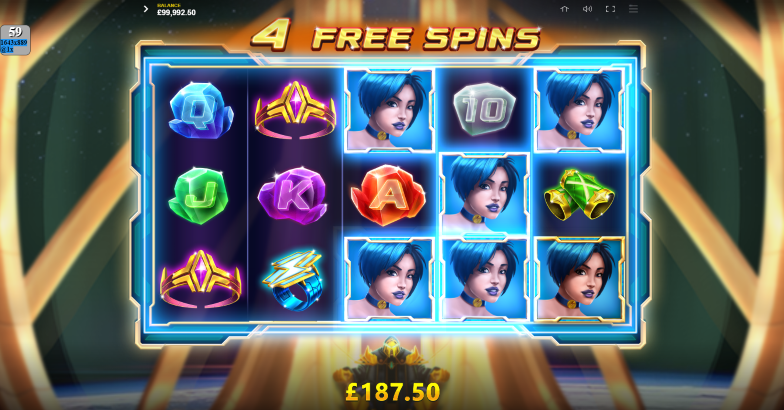 To be honest, the first time we opened up League of Wilds, we thought that this will be another mediocre superhero slot, but we definitely were wrong. League of Wilds is an awesome slot with a potential that is much better than the numbers care to show. The futuristic hero setting is a bit cliché, but Cayetano have done wonders for the gameplay model, so in the end, we get a slot that rewarding and fun. We managed to score our first Free Spins just on the 2nd spin, so perhaps that will give you an idea of where we stand.