You may not have seen it, but most probably you have heard of it. In 2020 the world was taken by the Tiger King: Murder, Mayhem and Madness TV documentary. It depicted the story of Joe Exotic, real name Joseph Allen Maldonado-Passage. This man has had many roles, but most notably he was known as a zoo operator, activist, gun enthusiast, politician and most importantly, one heck of an entertainer. His controversial life turned out to be some good content for Netflix, hence the “legend” was born. Opinions about Joe Exotic differ, so surely not everyone will be pleased to see this character back in such a fashion.

It almost seems perfect, that it’s Red Tiger leading the reigns of Joe Exotic slot. The Tiger King has an interesting life, but we were very surprised to see him appear on a video slot, especially knowing the ending of the whole story. Some may say that Red Tiger could be showing Joe Exotic an undeserved admiration, him being a convicted criminal and all. Then again, we have seen slots portraying Al Capone and Pablo Escobar, so we don’t feel like Joe Exotic is comparable to these fellows. Red Tiger definitely has got our attention, so let’s see what’s behind this Joe Exotic slot. This peculiar slot consists of 5 reels and 4 rows. The presentation does well to reflect the extravaganza lifestyle of Joe Exotic. There is a lot of shine and glimmer in this slot, starting with the layout itself, ending with the game symbols and features. In the background, we can see pictures of animals and Joe. There is easy-going southern music that plays in the back before you begin to make actual spins. All in all Red Tiger have done a worthy job reflecting the flamboyant character in a video slot. 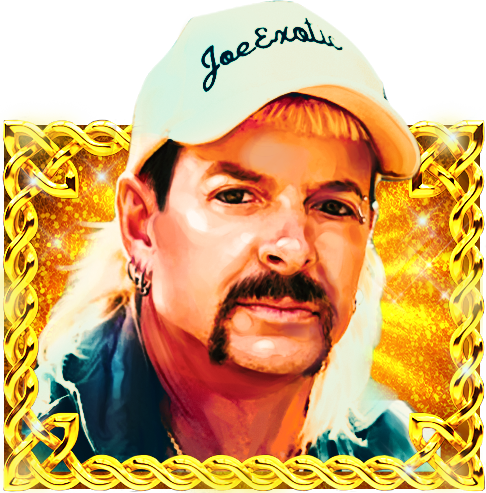 If you’ve never seen the documentary, then the Joe Exotic slot symbols won’t mean a lot to you, but if you have seen it, or perhaps if you’re a fan, then you will be delighted to see some familiar faces. Four low symbols are a bit random, as we can see a flask, hat, belt and some sort of Joe Exotic token. It gets a whole lot interesting with high symbols though. These are some of the characters of the Tiger King documentary. Meet Eric Cowie, James Garretson, Allen Glover, Jeff Lowes and Joe Exotic, as the highest symbol. Joe Exotic slot comes with 20 paylines.

It’s an exciting and unusual theme, but at the end of the day, it is still a video slot, so we shall see, what Red Tiger are hiding behind the glamorous image. Red Tiger have gone with Medium-High volatility, perhaps with plans to appeal to a larger player base. The RTP is striking a bit below that 96 mark, which is almost like a waterline, so you always want to be above it. Doing business with Joe Exotic can bring you a reward of up to 4,117x. Red Tiger have brought us bigger wins before, it’s true, but Joe Exotic slot is no slouch either. This strange slot is playable on all devices with a bet range of 0.10 – 20.

Red Tiger just didn’t slap on a Joe Exotic trademark on their slot and call it a day. They have made plenty of bonus features, which will entertain and reward players nicely. Joe loves weapons and explosives, so one of the features is called Dynamite. An explosion is triggered randomly. Once it happens, all low symbols present are blasted away and only high symbols stay.

There are 3 bonus features that can be triggered with special bonus symbols. The first one is Tiger Bounty. Three Tiger Bounty symbols trigger this said bonus. Basically, this is an instant cash prize, but it’s made to look like an auction. You start off with one random prize, which then is either claimed or rejected, meaning that you get a new and better offer. The feature ends until one offer is claimed or if you reach 50x. 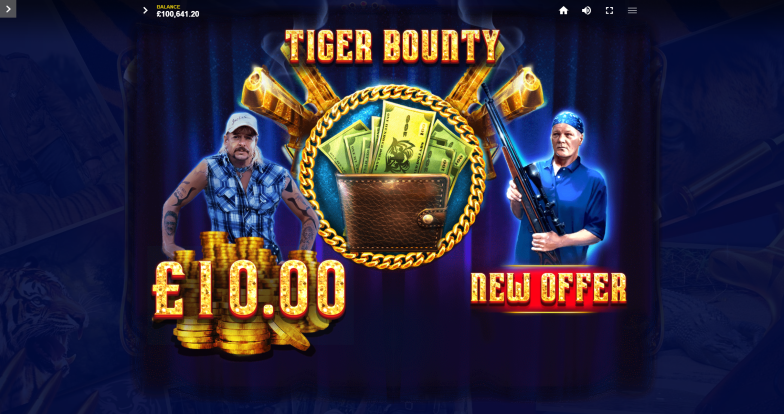 Next up Election Time. Joe Exotic had an unsuccessful run for the presidency in 2016, but that doesn’t mean that we can’t get involved in another election. Once more, you will need 3 Vote Joe bonus symbols. At the bottom, you will spot 4 candidates. These are four high symbol characters with four different reward values. Joe Exotic will always provide the biggest payout. On the screen, there will be 12 Vote symbols, which players uncover one by one. Once you match your first 3 symbols, that specific payout is rewarded. 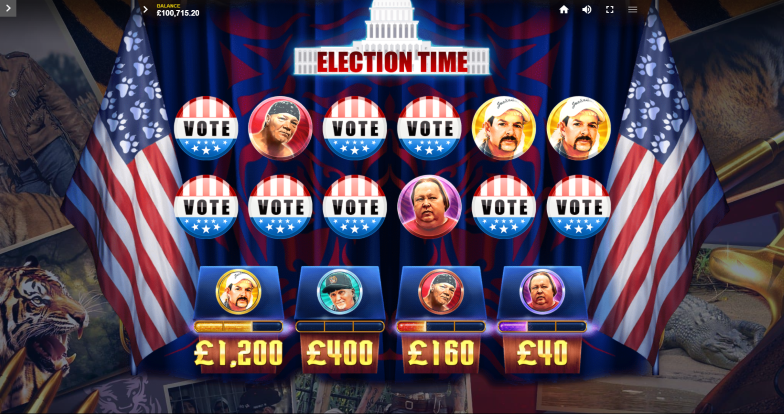 Last but not least, we got the Exotic Spins, the crown bonus of the Joe Exotic slot. On all occasion, players are given 9 Free Spins. During these Free Spins, the middle reel turns completely wild. This 4 rows high wild is sticky throughout the whole bonus feature. Also, each win adds to the wild multiplier, which can go up to 15x. Landing bonus symbols on reel 1 and 5 grants players 5 bonus spins. 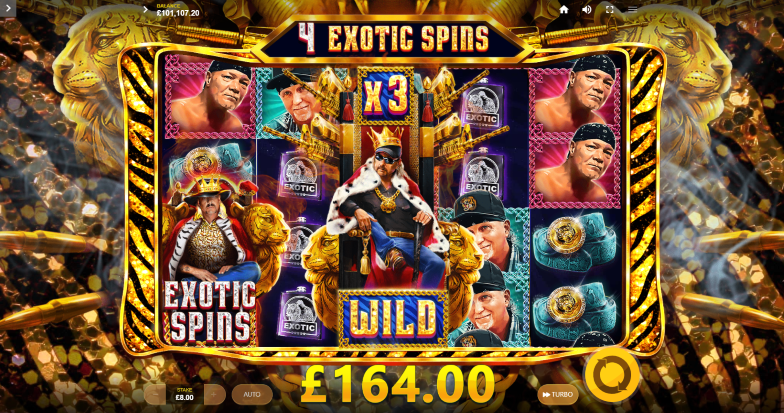 We have to say, this one was a bit of a shocker. Red Tiger usually play it safe, using some proven themes such as Ancient Egypt, Leprechauns and Pirates. It seems like their ideology is beginning to change a bit. We already found What the Fox Megaways to be a bit odd, but Joe Exotic definitely takes the cake. It’s also unexpected to see Red Tiger getting themselves involved with real-life characters. This is something that NetEnt and Play’n GO have done plenty of times before, so we suppose it was only a matter of time before Red Tiger wanted to join in. It’s just surprising that their first such slot is a bit controversial, to say the least.

At the end of the day, each has their own opinion about the characters of Tiger King, so if you are a fan, then Joe Exotic slot is a perfect treat for you. From this perspective, the Joe Exotic slot is really well made. It captures the flamboyant nature of the show and all the characters are a welcoming sight for the fans of the series. From the gameplay perspective, the Joe Exotic slot is decent. It has a good variety of bonus features and the max win is nice, although nothing too special. If you closely followed the story of Joe Exotic, then this slot is a must-try for you.