Classic slots aren’t going away any time soon, that much is clear. There is something in them, that just keeps us coming back. Perhaps, it’s a sense of nostalgia or just the plain simplicity of these games. The answer may differ from player to player, but if you’re into classic slots, then you might be in for a pleasant surprise. Without further ado, let’s jump into Hot Triple Sevens Special to see what’s new and old.

Imagine yourself in a dark room, where the only thing you see is the neon-bright slot machine in front of you. It’s such a simple design idea, but for some reason, it’s very appealing. The pink neon lights combined with that classic suave soundtrack create a charming experience, worthy of Miami Vice. Instead of just 3 single slot reels, the new special edition comes with 5 reels and 3 rows. This is a pleasant change because the new layout just feels a whole lot more comfortable. Classic slots may still be in demand, but 3 reel slots with a single row aren’t, so this is a good change by Evoplay. The game runs smoothly, so it’s a joy to play both on desktop and mobile devices. 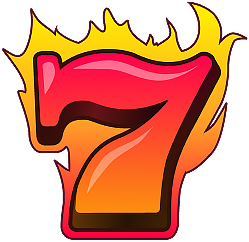 The game is called Hot Triple Sevens, so don’t expect a large variety of symbols. If you take a look at the paytable, then you’ll only see sevens as far as your eye can see. Pretty much all symbols are brought over from the previous game, so there is nothing fancy and new in this regard. Players will come across white, blue, red sevens and their flaming counterparts, plus the special Hot Triple Sevens wild symbol which provides the biggest payout, 250x for a 5 in line. In total there are 6 regular symbols on the Hot Triple Sevens Special slot.

The main and sole bonus feature on both games is the Free Spins feature. Evoplay have tinkered around a bit, improving and changing a couple of things to bring us a bonus feature, which is more volatile and rewarding. Like before, you need at least 3 scatters to play the Free Spins bonus game. The new Hot Triple Sevens slot doesn’t limit itself to 10 Free Spins, as for 4 and 5 scatters players can get 15 and 20 Free Spins respectively. During Free Spins, all wins are multiplied by 3x. Basically, Evoplay have added an opportunity for you to extract more out of Free Spins, while still keeping that classic feeling of the previous game. 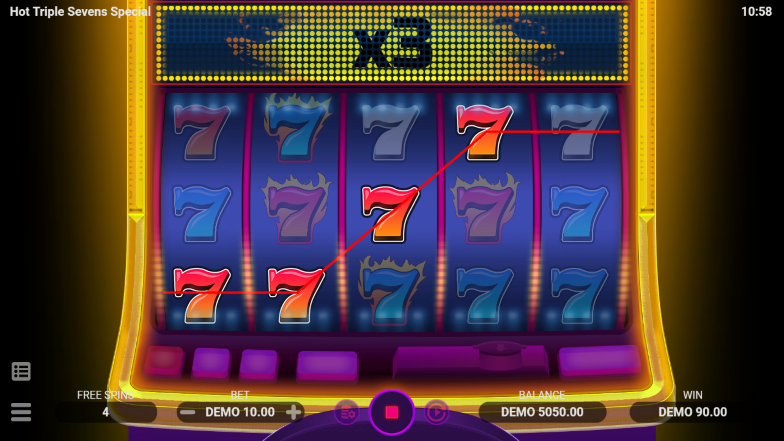 There are remakes that completely change up the game and then there are remakes that slightly adjust some game elements. Hot Triple Sevens Specials is leaning more towards the latter, but there are some significant changes that for us, make this remake successful. First of all, we’re glad to see that the layout has been extended to 5 reels and 3 rows. This set-up feels more comfortable and it’s just more fun to play. Another big topic is the increased odds of scoring big wins. Everyone loves to win big, so it’s great that we can now score big wins much more often. The visual and audio presentation hasn’t really changed, but we feel like there was no need for changes in the first place. Hot Triple Sevens Special may not be a grand remake, but the things it changed, it changed for the better, so we have absolutely nothing to complain about.

Can I play Hot Triple Sevens Special for free?

Yes, just use the available demo player to play this slot for free!

How to get Free Spins on Hot Triple Sevens Special?

To get access to Free Spins, you’ll need to land at least 3 scatter symbols.

What is the RTP on Hot Triple Sevens Special?

It’s King Arthur vs Mordred and you can only pick one side, so who will it be? A slot that is capable of producing a 35,000x max win

Based on the Swedish metal band, HammerFall is the next big cascading slot from Play’n GO. Are you ready to go wild?