We are taken back to the year 1948, to an alternate universe where pigs do more than just playing in the mud. Highway 240 is terrorized by a motorcycle gang of outlaws. This gang is led by literal pigs, so meet the Swinehouse brothers - Smokey, Streaky and The Stud. They are known as Hell’s Hogs and they are not taking orders from anyone. Reflex Gaming present Hell’s Hogs, a lighthearted casino game with three exciting bonus features.

The post-war US in general is an interesting theme to use. This was a period where people started to express themselves more, of course, in this case, it’s the pigs that are showing their inner potential. Hell’s Hogs is a real rock’n roll slot. When idle, the game is giving off wild west vibes, but when you get the spins rolling, the rock music completely takes you over. Route 240 is deserted and barren, but the game makes it appealing nonetheless. The presentation and visuals of Hell’s Hogs are reminding us of the style that is usual for Big Time Gaming. Perhaps, Reflex Gaming sought some inspiration from them. 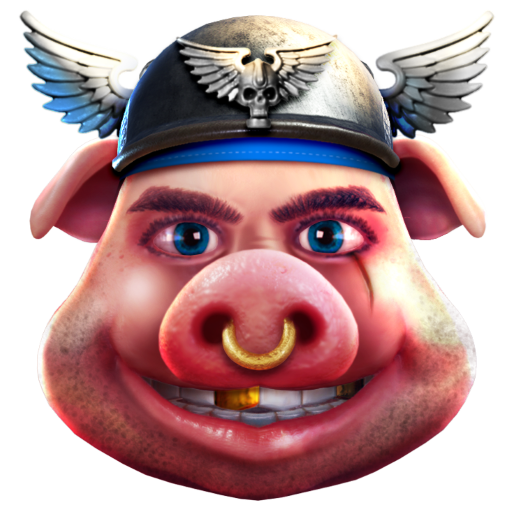 Hell’s Hogs' set-up is quite general. We got 5 reels, 3 rows and 20 paylines. It’s a classic slot but the bonus features add a nice twist. Hell’s Hogs paytable brings in 12 symbols in total. Seven of these symbols are regulars while the rest are specials, which will get into in a bit. Like on the majority of slots, card suits occupy the low positions and picture symbols are those with higher values. From the regular bunch, Hell’s Hogs logo is the most valuable symbol in-game.

We are a bit surprised to find that Hell’s Hogs is a low volatility slot. It is quite “rock n rolly” and the max win is 10,136x, so we are almost expecting this highly volatile nature. Low volatility can be a positive thing, as generally, the wins should be distributed more evenly, but then again, the hit rate is around 27%, which is not that impressive. Another challenging aspect is the 95.63% RTP. It’s far from horrendous, but all these minor drawbacks add up. The bet range for Hell’s Hogs is 0.20 – 100. Reflex Gaming have optimized this game well on all devices.

Piggy in the Middle

Three hogs with choppers will appear on the screen. Each of these pigs will award a random cash value or enhancements. Player continuously keeps on hitting the Stop button, claiming whatever prizes they can until they hit a red X, which signifies the end of the bonus game. After this, all wins are cumulative. The enhancements can double up the value, pay values outside of chopper symbols or boost your current win amount. 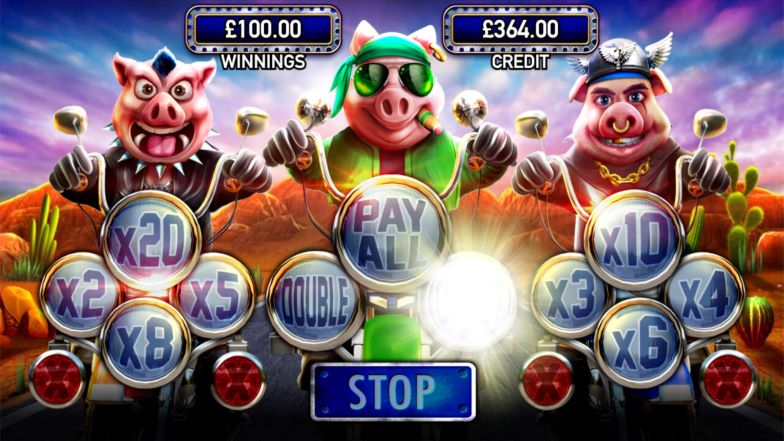 This Hell’s Hogs bonus feature awards 10 Free Spins with an incrementing multiplier. Each spin increases the multiplier by one, so by the time you reach your tenth spin, the multiplier is 10x. Re-triggers are also possible, which can push this multiplier much further. 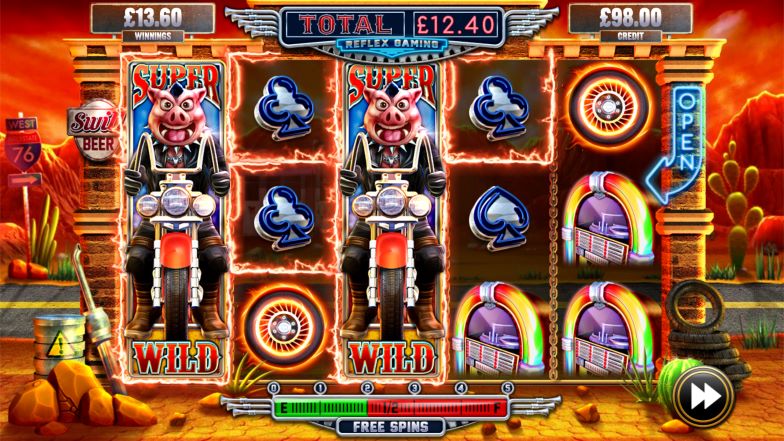 Reflex Gaming have also added a feature for the main game. The Chop Shop symbols can appear on reels during the base game. All of these symbols transform into one symbol type.

Reflex Gaming is one of those providers that every iGaming industry worker has heard of, but when it comes to naming their biggest games, the memory seems to fade away. We believe they have some massive catching up to do if they wish to stand equal to other popular providers. Hell’s Hogs slot is seemingly moving Reflex Gaming in the right direction, but it’s still far from perfect. The payouts seem promising, but the math model is flawed. The presentation is also quite nice, but then again, nothing too special. We like how Hell’s Hogs is giving players multiple bonuses and the slot works quite well, so Reflex Gaming are on the right path, but there is still work to do.

What is the minimum bet on Hell’s Hogs slot?

Yes, you can play Hell’s Hogs for free, once the official demo version is available.

What is the RTP for Hell’s Hogs slot?

The greatest Aztec emperor welcomes you to his halls. His lands are rich and so can be you if fortune is on your side