Helios is an ancient Greek deity, who is the god of the sun. Popularity wise, gods such as Zeus, Athena and Hades have been much more popular, but we still see the name Helios used in the modern-day. Nonetheless, this god still is a prominent part of Greek mythology, so it’s only fair that he gets his own slot which is called Helios Fury. This, of course, isn’t our first trip to ancient Greece, because, arguably, this setting has even become more popular than Ancient Egypt, which dominated the early years of video slots. The slot is called Helios Fury, so we wonder, what got him so upset and angry?

Relax Gaming have done everything but relaxed, as they have relentlessly been making new slots one after another. That may be a bad thing if all your slots are identical, but thankfully, Relax Gaming haven’t gone down this road, as all their releases are in some way special and recognizable. Dead Man’s Gold, Troll’s Gold, Volatile Vikings, the last three publications have been fantastic, so can Relax Gaming continue this streak of success? We certainly hope so, because Helios Fury sounds mighty and interesting.

We are somewhere in Greece, by the coast of the Aegean sea. The city we see has strong walls and beautiful buildings, styling classic Greece architecture. Quite recently, while reviewing Volatile Vikings, we praised Relax Gaming presentation skills and even though Helios Fury looks great, it’s perhaps not as exciting and beautiful as some of the previous slots that we mentioned. The statue of Helios is an interesting touch, but the 3D design looks a bit cheap and besides the city, there is not much else to see. The music is wonderful though. Don’t get it wrong, Helios Fury still is a great looking game, it’s just not as great as some titles before it.

Talking about looks, let’s slowly transition to Helios Fury game symbols. Even though very simple, the low gem symbols still look rather nice. There are 5 of them in total. Additionally, we got 4 objects such as shield, sword, horn and helmet. These are classified as high symbols. A Greek triene is the Wild symbol of Helios Fury. During the main game, Helios Fury offers 99 paylines, but this number extends to 259 during the Free Spins phase.

Mighty Helios might be furious, but he can treat you well. Actually, he can treat you more than well, because the max win on Helios Fury can reach up to 50,000x! Yes, you read that right, Helios Fury is one of the highest paying Relax Gaming slots. The max possible payout is 1,000,000 EUR/USD. To keep casinos in business, the bet range is slightly limited, going from 0.10 to 20. To match the fury of Helios, the volatility setting is set to high. Helios Fury also has a good RTP of 96.27%, which jumps to an impressive 97% on bonus buy.

Like many Relax Gaming slots, on Helios Fury, we got 1 feature for the main game and 1 feature that works as an independent bonus. Mimicking the ship movement, whenever Wild symbol lands it moves one position to the right while awarding a respin. This is called the Wild Re-Spin feature. The Wild keeps on moving as long as there are new wins to be made.

If the Wild symbol manages to move all the way to the 5th reel and produce a win, then Fury Free Spins are rewarded. You will be given 6 Free Spins and a Wild which is placed in the middle of reel 1, which also extends the reel by 2 additional rows. Each new Wild awards +1 Free Spin. The layout now also comes with a hotspot, which initially is located on the last reel of each row. Once Wilds reach it, the hotspot moves to the left side. Another recurring feature on Relax Gaming slots is the bonus buy option. Instant Free Spins access can be bought for 90x, which is a decent price, considering that the max win can be 50,000x. 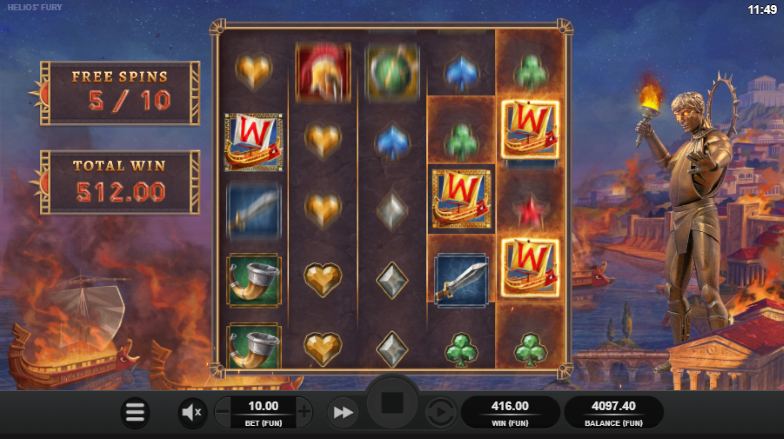 We feel the words don’t do credit on how spectacular Helios Fury can be. The bonus feature sounds rather simple. You move ships from left to right, and expect the best outcome, right? Well, to put it simply, it’s kind of true, but these simple walking Wilds can produce enormous wins, so that’s all that matters in the end. Although not spectacular in looks, Helios Fury still comes with a nice presentation. Even though Ancient Greece is super popular in video slots, Helios Fury feels new and exciting, so Relax Gaming definitely have done something special here.

How to get Free Spins on Helios Fury?

By chaining up consecutive wins, you need to move the walking Wild to the 5th reel and score a win, which includes this specific Wild symbol. Another way is to pay 90x, to gain instant access to the bonus.

Can you play Helios Fury with no deposit?

Yes, Helios Fury can be played for free using the available demo version.

Helios Fury comes with a staggering 50,000x max win. This is one of the highest paying Relax Gaming slots.

A majestic and rich place, favoured by the gods. Visit the ancient city of Troy and learn what treasures you can find here