Two ancient worlds dominate the world of video slots. The most famous is Ancient Egypt but right behind it comes majestic Ancient Greece. The birthplace of democracy and culture, we are once again invited to the illustrious Greek world. Guardian of Athens is based on the game model of Eastern Emeralds, which reaped a fair amount of success. The theme has been switched up, but we can expect the gameplay to feel fairly similar. It is yet to be seen if this is a good thing or not.

Both of the themes aren’t the most exciting ones, but at the end of the day, a good game model with solid graphics matter a bit more. Quickspin have kept the classic interface design, opposed to the one we got on Wild Luchador. Guardian of Athens puts a big emphasis on multipliers and speaking from our experience, everyone loves some big multipliers. If you multiply your bets enough times, you might even reach the max payout, which is 16,000x. Let’s see who guards Athens.

The Slot is Available in Quickspin Online Casinos Guardian of Athens comes with a harmonious feeling. From the looks of it, we seem to be somewhere up in the skies, perhaps on the top of the iconic Mount Olympus, where Ancient Greek gods dwell. Heck, if you feel stressed out then just put Guardian of Athens music in the background and relax for a moment. Two statues of Athena are situated on the sides of the game. Athena was known as the protector of Athens, so this slot is dedicated to her. 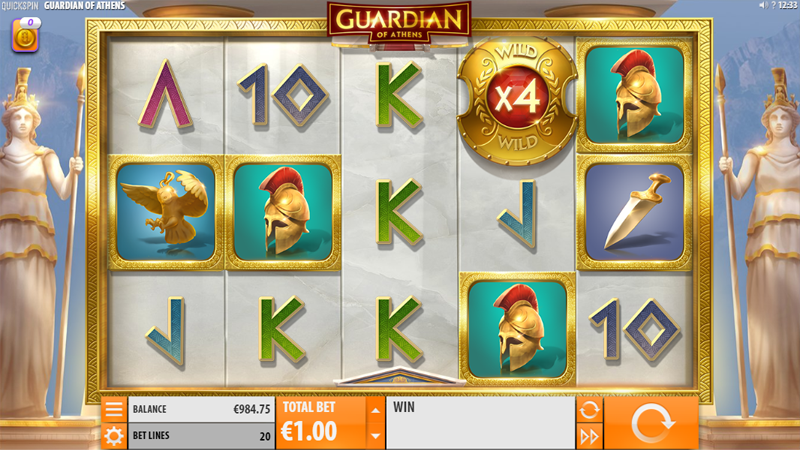 When it comes to the layout, it’s a basic 5 reel 3 row set up that comes with 20 lines. Guardian of Athens is one of the more basic slots from Quickspin, but sometimes it serves well not to overcomplicate things. The same goes for symbols. Low-value symbols are basic Greek style 10 – A, while high-value symbols are a dagger, an owl, helmet, golden coins and golden vase. To be fair, some of these symbols look refurbished and the quality is mediocre, so Quickspin dropped the ball a little. You will also notice how payouts for the regular symbols are on the low side, as Guardian of Athens mostly relies on multipliers.

Guardian of Athens is based on the game model of Eastern Emeralds, so it retains pretty much all of the payouts stats. Just as before, we get a high volatility slot, that comes with an RTP of 96.58%. Max possible win is 16,000x, which was and still is a big payout. Guardian of Athens runs well on all devices. The bet choices for the slot is 0.20 – 100. Eastern Emeralds was not too easy going, as the model can prove to be tough, so expect a similar treatment on the Guardian of Athens.

Guardian of Athens wild symbol is an Ancient Greek style shield, which can appear on any game reel. These wilds can appear in the regular form or with an additional multiplier of 2x, 3, 4x or 5x. The multiplier is affected by the symbol’s location on the reels. So the first reel will only get the regular wild while 5th reel will always drop 5x wild.

Free Spins or the Fate Bonus is acquired by 3 scatters, which land on reels 2, 3 and 4. Afterwards, you are given a choice between 4 bonus options, or as Guardian of Athens presents it, you have to choose your fate. It’s totally random what fate holds once the spins begin, but you can choose how much spins you want in combination with what kind of multiplier you get. To simplify it, you either go higher risk higher reward or the opposite. The choices are the following:

Two or more multipliers on a winning line can multiply themselves. 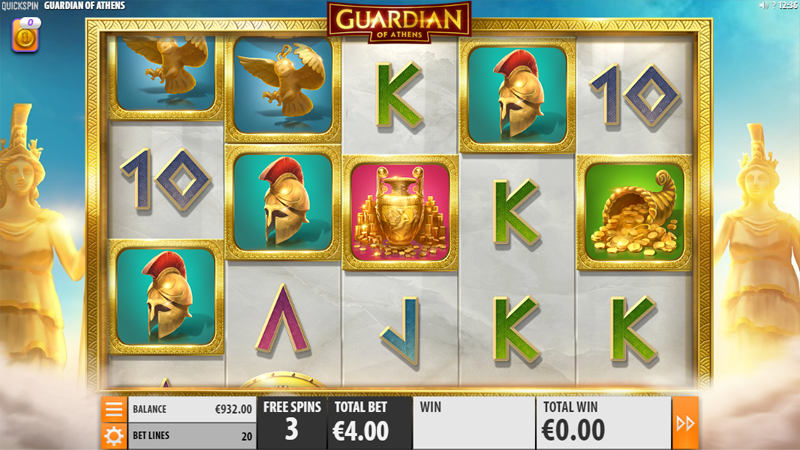 Guardian of Athena is like a sister ship to Eastern Emeralds. It’s the same game model with the same payouts and gameplay, but the theme and the name have changed. With that being said, for some reason, we enjoyed Guardian of Athena a bit more. Perhaps it was the personal preference of the theme or maybe we just had a more successful test session on Guardian of Athena, but the game feels slightly better, although only by a small margin. The 16,000x max win is as pleasing as ever so it’s great to see the old proven model back on track.

The most successful Push Gaming series is back in full strength. Fat pockets, flashy cars and a luxurious lifestyle await