I wanna Rock! Do you wanna Rock? If you do, then great, because we’re about to rock’n roll the whole night long with Thunderkick’s latest slot Gods of Rock. They say that rock never dies, that it is eternal. Another everlasting thing is legends and gods. Turns out they also love to rock, as they have prepared a whole rock festival for us to enjoy. Gods of Rock is the ultimate rock experience, thrusting you into the wildest concert you’ll ever see. Blasting music, show lights and the glory of gods are all available on the Gods of Rock slot.

Metal and rock are two very popular genres in Scandinavia, so from time to time, we do see a couple of such slots released in the market. The most notable ones clearly come from the Swedish provider Play’n GO as they have released dozens of different rock band slots. Although not focused on a specific band, Thunderkick also want to have some fun, so they are bringing a whole band of gods to do their bidding. We’ve never seen such a slot before, so it will be interesting to enjoy this unique experience. Tongues out, hands up and away we go!

Turn up the volume, to fully immerse yourself into this wild party. Gods of Rock slot is situated in a large stadium, which is fully packed with rock fans. Instead of lighters and flashlights, the fans are holding spears and sickles, so it’s not really the safest environment. The stadium looks quite ancient, which is fitting for the gods. Overall, Thunderkick have done a nice job on the presentation, you can see that they have cared about every small detail. 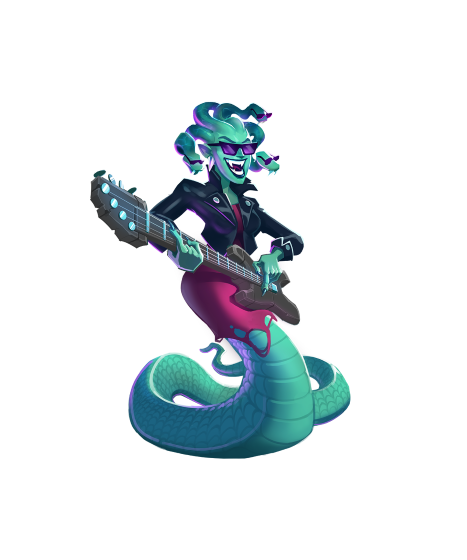 Thunderkick are no strangers to the 6 by 4 game layout. This setup has been used in all of their Crystal Quest slots. Gods of Rock comes with a more unusual 466 ways payout system. One of the best visuals of this game is the set of high symbols. These are various gods and creatures such as Medusa, Anubis, Athena, Thor and even the Devil. Some of them though don’t seem to be too fitting in a game called Gods of Rock. Together with 10, J, Q, K and A low symbols we have 11 regular symbols plus the Wild, which is the horn hand gesture.

Gods of Rock is a no-nonsense high volatility slot with plenty of great win opportunities. Thunderkick boasts high win potentials on many of their games and Gods of Rock seems to be no exception. Sporting 20,000x max win, this godly concert has stunning payout capabilities. Thankfully, Thunderkick have kept the RTP in check, as it is 96.05%, so pretty much straight on the average. Players can enjoy Gods of Rock on all devices. The bet range for this slot is 0.10 – 100.

Gods of Rock is no Megaways slot, but it comes with some similarities. Apart from the larger game layout and a heftier sum of lines, the winning symbols are replaced by new ones, so you can score consecutive wins with a single bet. Although not a bonus feature on its own, it’s still worth mentioning.

To add some flair to the Gods of Rock main game, we got two bonus features that will come in handy. From time to time you may come across Charged Wilds. These special Wilds increase the multiplier for the corresponding reel by 1x. The multiplier can reach up to 11x per reel. These reel multipliers can also multiply each other. Every Charged Wild explodes the surrounding symbols, dropping down to the bottom and turning into a regular Wild. The exploded symbols are collected and then added to the Bonus Meter. Collect 30 symbols to trigger the Wild Encore feature. This extra feature places 1-3 Charged Wilds on random positions. 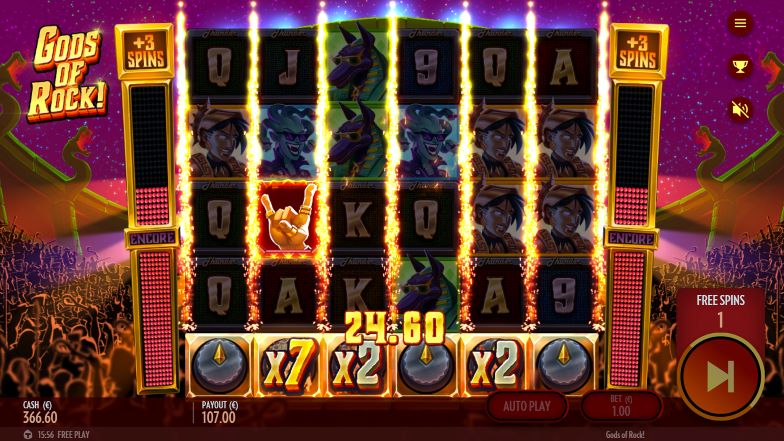 Encore is only half of the fun, as filling the bonus bar completely triggers the Bonus Game. After all the main game action ends, your 8 Free Spins can begin. As opposed to the main game, the Bonus Meter doesn’t reset between spins. Each fully filled meter awards +3 Free Spins. 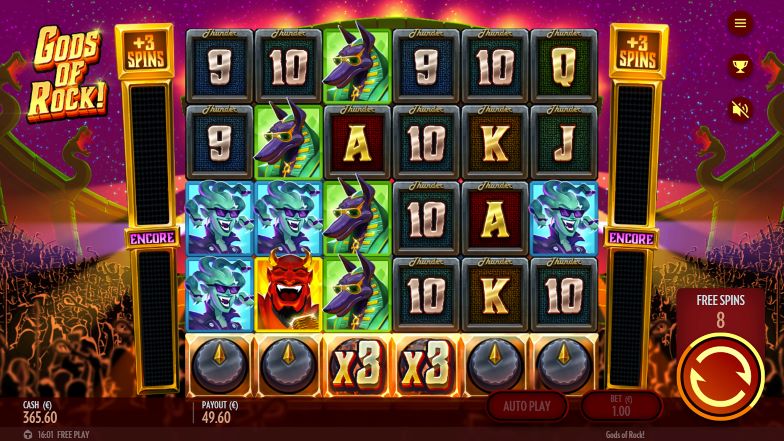 Gods of Rock isn’t that slot, which put all its emphasis on one main bonus feature. Instead, players are thrown into this crazy concert which is full of wilds and wins, even during the main game. This is great because the main game can be as exciting as the bonus game. Of course, the visuals are also dazzling, we can appreciate the originality of the theme. This is not the first time that Thunderkick like to take ancient gods and put them into a different universe like it was on Pyramyth. With the 20,000x max win up for grabs, this rock fest can be the real deal.

What other Thunderkick slots can be played on SixSlots?

What is the max possible win on Gods of Rock?

Are there bonus features on Gods of Rock?

Yes, Gods of Rock comes with some fantastic bonus features, such as Charged Wilds, Wild Encore and the Main Bonus Game.