Folsom State Prison may not be the most notorious in the world but it is well-known. One of the main contributing factors is the singer Johnny Cash. Folsom Prison hosted Johnny Cash back in the 60s and Johnny Cash also has a song called Folsom Prison Blues, so the name got a round. Of course, this institute has also been home to some serious criminals, so it’s a place that shouldn’t be taken lightly. This is also not our first prison tour with Nolimit City. The road started with San Quentin, so who knows, maybe we will also visit Alcatraz one day, but today we’re having a look at the Folsom Prison slot.

Folsom Prison slot continues with the bleak and unsettling tone of Nolimit City. By now we’re used to this style, so if we suddenly receive anything cute and fluffy then we will feel even more unsettled by that. As usual, Nolimit City have filled this slot to the brim with features and at the bottom of the glass, we have a powerful 75,000x max payout. Folsom Prison seems to be another Nolimit City banger so we can’t wait to jump in and experience if Folsom Prison is as bluesy as Johnny says.

As expected, Folsom Prison and San Quentin slots have their similarities, but Folsom Prison seems to be more inspired by that 60s period. It’s more blues and rock than hip hop and it’s also a bit grimier and darker than San Quentin. These notorious American prisons aren’t really known for their hospitality so we think Nolimit City have done a good job of portraying how these places feel. The visuals may be bleak, but there are plenty of shining opportunities for the player. 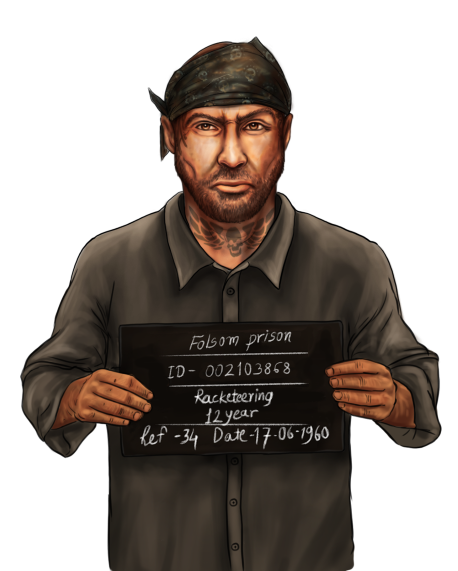 The line-up of prisoners consists of seasoned criminals who are here for various mischievous reasons. The man with the Cash tattoo on the forehead is the most valuable symbol in the game. Besides these 5 gentlemen, we also have the low symbols of 10, J, Q, K and A. Folsom Prison slot is uniquely shaped. By default, we have a small 4 by 2 layout, but as you can see, other positions are locked behind bars, which can be opened by special symbols. Of course, Folsom Prison is not the first Nolimit City slot that plays around with this idea of locked positions. Due to many contributing factors, paylines on Folsom Prison can go up to 46,664.

Folsom Prison slot is just for you if you’re browsing for slots with huge potential. It’s a Nolimi City slot, so, of course, the potential is cranked up. At its best, Folsom Prison can produce a win of 75,000x! That is still a bit of from San Quentin, but c’mon, it’s 75,000x, so who in their right mind will complain. The RTP is solid, just around that 96% mark and volatility naturally, is high. The minimum bet on Folsom Prison is 0.20 but the highest you can go per spin is 120.

Let’s be honest, nobody like cockroaches and those who do are in denial. Well, be prepared for them, because Folsom Prison is packed with these nasty critters. By landing 3 or 4 scatters you will trigger the main bonus game, but 2 scatters will transform into xWays, xSplits, Wild or Cockroach Nest Wild symbol.

The xWays symbols transform into a matching regular symbol. It also increases the ways to win. xWays symbol will open 1 symbol above and 1 below.

xSplit symbol will split the entire row they land on and turn themselves into 2 Wilds.

Cockroaches are walking symbols that walk over reels, adding multipliers to symbols that they cross. The starting position for cockroaches is always a Wild. They also open up locked positions on the reels. During the bonus game, cockroach symbols may combine with cockroach nests, increasing multipliers for the rest of the round by up to three times.

By landing 3 scatters symbols on the Folsom Prison slot, you will be awarded 8 Walk the Line Free Spins. Any split scatters will award +1 Free Spin. Each extra scatter afterwards awards +2 Free Spins. On each spin, three centre rows are open and a minimum of 1 cockroach is guaranteed.

The Chair feature is awarded for 4 scatter symbols. Same as before, by default you get 8 spins, plus any additional ones from the xSplit. During this feature, all cells are unlocked and you’re guaranteed a minimum of 3 cockroaches. 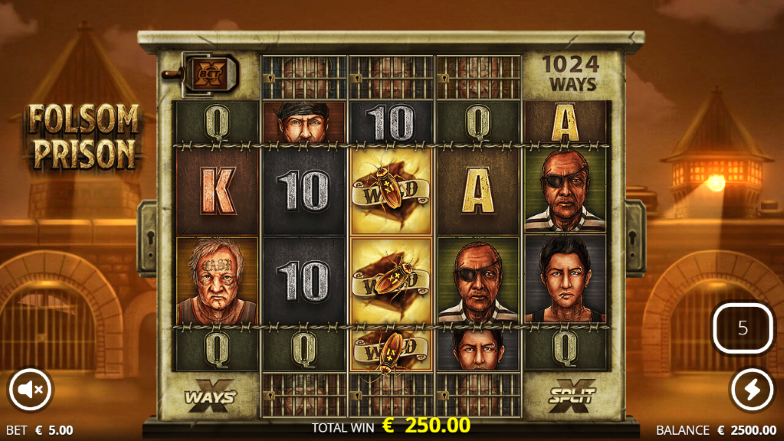 Ever since it was released, San Quentin shocked players in many ways. It was a bold choice of theme which gave something unpredictable and unseen. Of course, there was also the massive potential that is still leading Nolimit City to this day. Folsom Prison feels a bit like déjà vu because once again we’re standing in front of a crazy and explosive prison theme slot with a lot of features and a crazy potential. With roaches crawling around and cells opening, Folsom Prison is a rather dynamic slot, so we certainly had our fair share of fun with it. It’s a mad casino game, that you should certainly try.

What is the RTP on the Folsom Prison slot?

What is the max win on the Folsom Prison slot?

Can I play Folsom Prison for free?

Yes, you may play the Folsom Prison slot for free, by using the available demo player.

We’re taking a trip to the Native American heartland, where the indigo blue sky is lit up by the moon, as wolves howl the night away