Microgaming partner Stormcraft Studios is one of those providers which is not often spoken off, but their games are known to almost all dedicated slot players. This studio stands behind such slots as Mega Moolah, Immortal Romance, Fortunium Gold and Agent Jane Blonde. They have switched up the style for this release as we stray further from adventures and leading main characters. We are now introduced to what is known as Fire Forge. There is no fancy plot for this slot, so we will have to let our eyes paint the picture.

We’ve seen some interesting scenarios coming from Stormcraft Studios, but in this way, Fire Forge is definitely taking it a notch down. That only applies to the visual aspect as the game model is not even remotely grounded. Fire Forge comes with a jaw-dropping 50,000x max payout. This is one of the reasons why players always find themselves coming back to their slots, it’s payouts like these that makes you want to stay. Fire Forge has fired up our interest, now it’s time to find outs its true nature.

For better or worse, Fire Forge provides a very basic presentation. It’s like one of those fruit machines, only now with a theme that’s inspired by the fantasy dwarven culture. We even get 5 reels and 3 rows, so this is a straight forward as it gets. Besides the Fire Forge game layout, you will also spot Jackpot values and the max win potential. Fire Forge is not the most aesthetically looking slot, but we have a feeling that Stormcraft Studios never had the idea to make it such. 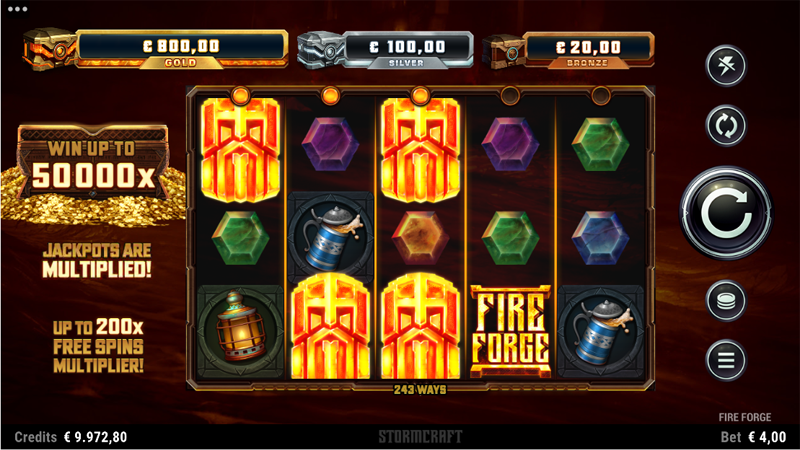 If we take a look at the paytable, there is one interesting thing that stands out. The scatter symbol of Fire Forge is almost identical to the Stormcraft Studios logo, which makes you think, are they trying to make Fire Forge into their flagship game? With such potential, it would make sense. Anyhow, low pay symbols are 4 gems in colours of purple, blue, green and orange, while high pay symbols are objects such as stein, lamp, gauntlet, anvil and Warhammer. The wild symbol spells out the name “Fire Forge”.

Don’t judge a book by its cover. This saying goes well with the nature of Fire Forge. It seems very basic and straightforward, but the looks are deceiving, because not only this slot comes with some great bonus features, it also can pay out like an ATM. Of course, no wins come without effort. Fire Forge can give with one hand and take with the others because this is a highly volatile slot after all. Fire Forge comes with a desirable 96% RTP and let’s not forget, that the game model is built on 243 paylines. Finally, if dwarves are willing, then players can reach up to 50,000x big payouts. That is a serious payout, by any standard. The bet range is 0.25 – 20 EUR/GBP.

There is plenty of excitement, that Fire Forge can bring. Let’s begin with the main game. Rolling Reels essentially is a tumble mechanism, meaning that all winning symbols are removed, to make space for new symbols to drop in from above. This lets you build consecutive wins with a single bet.

Ultimately, we are more interested in Fire Forge Free Spins, which you acquire by landing at least one scatter on each game reel. That may seem like a lot, but keep in mind, that scatters drop fairly frequently. After the tough part is done, you get to pick between 3 Free Spin modes. 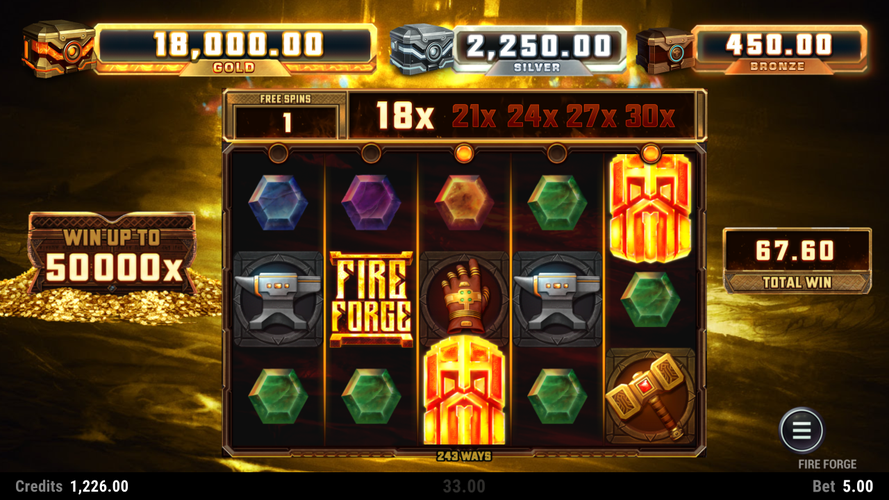 It’s up to you to decide, which Fire Forge Free Spins mode works best for your playstyle. Also, when you get 5 scatters, there is a chance to trigger one of the game’s Jackpots. Bronze Jackpot awards 5x, Silver Jackpot 25x and Gold 200x. To be honest, these values don’t really deserve to carry the name of Jackpot, for example, 5x is not what most of us would consider a Jackpot win. 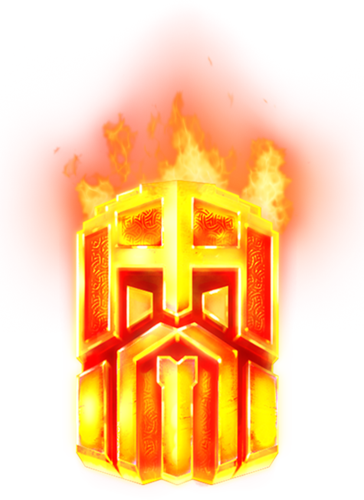 It’s not like Stormcraft Studios were renowned for their visuals, but we did get more used to seeing colourful worlds and interesting characters. No longer that is the case, as Fire Forge looks and feels basic. This is not good nor it is bad, it’s just different, so surely this comes down to each players preference. Thankfully, Fire Forge has a lot to offer. The 50,000x max win is very alluring and the multiple-choice Free Spins modes provide players with better control of their game. It’s also nice to have some Jackpots, even though their initial values aren’t that desirable. You have to keep in mind, that Jackpots can be multiplied.

What do canary birds have to do with dark mines? Play this slot to find out. Going down a mining shaft with Nolimit City