Wild West is a beloved slot theme. In general, it’s a very exciting period filled with adventures, action and drama, so no wonder that video slot providers choose it so often. As we mentioned, Nolimit City are especially experienced in this regard, as we have seen some stellar Wild West slots from them. El Paso Gunfight tells the story of Dallas Stoudenmire, a famous and deadly marshal. He keeps the peace around these parts and he never misses. Join the renowned gunslinger and claim the bounty of 44,440x. That’s a darn good payout for an honest days work, wouldn’t you say partner? Presentation-wise, El Paso Gunfight seems more toned down if we compare it to other Nolimit City Wild West titles. The music still is great, that’s something that they always manage to do well, although it’s a bit similar to another Wild West slot, so perhaps a little inspiration was taken. You would expect us to be on the street, duelling one of the bad guys, but the action takes place in a saloon, which is a very fond place for the Marshall. Just like Dead or Alive 2, the game is interactable, so you can shoot up bottles, glasses and even all the symbols. It’s a neat little addition that adds a lot to the immersion. El Paso Gunfight comes with an almost pyramid-like layout. We always get 5 reels, but the row layout is 4-3-3-3-2.

We believe it's clear by now that Nolimit City don’t produce regular slots, so of course, we got up to 43,334 different ways to win. To win, you need symbols, which we will get into just now. El Paso Gunfight low symbols are the typical bunch, so 10, J, Q, K and A. Four high symbols are characters and acquaintances of the marshal. They are known as Bystander, Hale, Krempkau and Campbell. The symbols aren’t highly detailed but they look great nonetheless.

Just like most of these slots, El Paso Gunfight is a high volatility game, but Nolimit City have added an option to make it extreme. With a simple flick of a switch, you can turn on the El Paso Gunfight extreme volatility mode. This also flips the game layout to the other side, so the 4-row reel is at the end, not the start. The default RTP is 96.06% so maybe not the most optimal percentage but we will let it slide. The max win for El Paso Gunfight is 44,440x, so once again a huge payout from the guys at Nolimit City. El Paso Gunfight slot runs perfectly on all devices, with a bet range of 0.25 – 50.

El Paso Gunfight is loaded with bonus features. Let’s start with more basic ones and then move up the list. We already mentioned the volatility changer, which is known as Stance. Our hero Dallas Stoudenmire is the wild symbol of the El Paso Gunfight. This is also the xNudge wild, meaning that it will always nudge to fully visible, being 3 rows high. Every nudge also adds a multiplier.

If you land all 5 characters at once, then the 4 Dead in 5 Seconds respin is triggered. During this respin, the Stoudenmire wild will expand and cover the 3 middle reels. Any active multiplier also applies.

Deputy Badge converts all low symbols into one random low symbol, with the badge afterwards acting as this symbol too. On the other hand, the Marshal Badge converts one high symbol into a random high symbol of the same type. Both badges together apply both effects, and the layout extends to 4-3-3-3-4. The badges then will act as wilds. This feature is called the Deputy and Marshal Raid.

El Paso Gunfight scatters are mariachi skulls with crossed golden revolvers. Get 3 of these and the award is 8 Gunfight Spins. Before these Free Spins, you can choose one of the two volatility settings. The scatters will act as 3 roaming wilds that jump to a new position on every spin. Badges award extra spins. Stoudenmire wild will double the roaming wild multipliers. 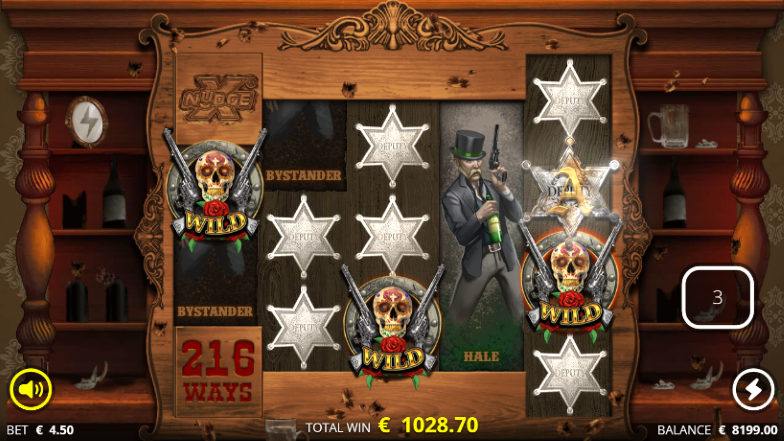 If you combine the best of both worlds, you get the Deputy or Marshal Gunfight Spins. To get this ultimate bonus you will need 3 scatters and 1 badge. To put it simply, during this feature both of the effects are active, so the symbol change and jumping wilds. This time, after the badge lands, the symbols stay in place for the rest of the feature.

We are not done just yet, because there is one final bonus feature on El Paso Gunfight. Drunken Gundfiguth&r… is the name of the feature, and no, we didn’t make a typing mistake. Triggered with 3 scatters and both badges, players are given 10 Free Spins to start with. The layout opens up and both the scatters and badges turn into jumping wilds. The Stoudenmire wild will double the multiplier and replace one of the scatters with a full size locked wild for the rest of the feature. 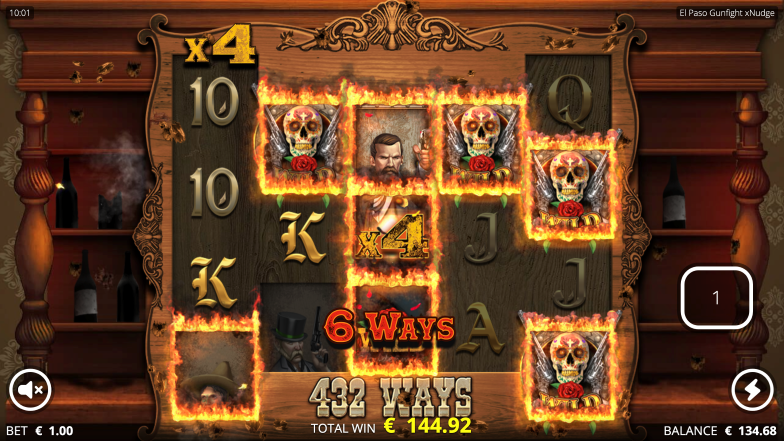 El Paso Gunfight is all about the gameplay. It’s full of bonus features and the extreme volatility makes the game super explosive. Compared to what we have had before from Nolimit City, the visuals are a bit weaker, but together with the music, we get a wonderful presentation, that fits the theme well. Most importantly, Nolimit City have kept the massive potential so having a 44,440x max win up for grabs is a great motivation to start playing El Paso Gunfight.