Egyptian Tombs is an upcoming slot from Snowborn. This studio is a partner of Microgaming. Don’t be surprised if you have never heard of them, because they have not yet made a big footprint in the iGaming world, but we are sure that their ambitions go that far. So far, Snowborn have released 4 video slots and each of them has had an interesting theme to offer, but for the 5th release, we are returning to the roots of slots, back to Ancient Egypt.

Generally speaking, Microgaming have great partners under their wing. Many upcoming studios and many already proven providers have offered us many entertaining slots, so we hope that Snowborn can join these ranks. From the looks of things, Snowborn are putting a big emphasis on mobile gaming, so their slots are well optimized for such devices. We expect Egyptian Tombs to be no different. The generic name of the slot puts some worries in our minds, but hopefully, we can be convinced otherwise.

The action takes place at night. We can spot two pyramids, the sphinx and the stary sky, which is illuminated by the moon. Egyptian Tombs doesn’t come with the straight-up classic Egyptian style, instead, it has a more mysterious feel to it. Some say that pyramids were built by aliens so who knows. Egyptian Tombs operate on a square 5x5 layout and it also comes with a weighty amount of 3,125 lines. Visually Egyptian Tombs is quite a busy slot, there are a lot of graphical elements to it, but it doesn’t get too overwhelming. 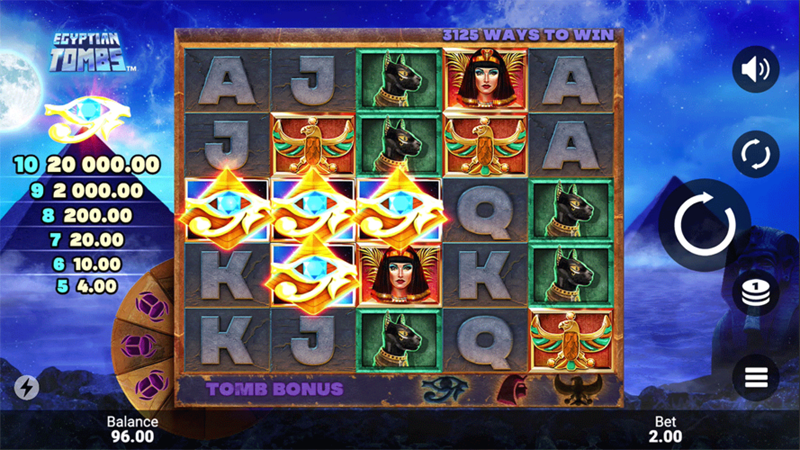 Behind every beautiful presentation stands a good set of symbols. It’s a bit arguable if the set on Egyptian Tombs is beautiful, but it’s not the worst display. The weakest link is the low symbol set, which is basic grey J-A. With a bit more detail, high symbols are ankh, cat, eagle and a woman, who shares a strong resemblance with Cleopatra. The wild symbol is an Eye of Ra, while the regular version of Eye of Ra pays out cash prizes for 5 or more symbols. Collecting 10 Ra symbols grants a win of 10,000x, which is the max single payout. Wild Ra symbol is available only during the Super Spins feature.

We have to take into consideration, that we are reviewing an early state version, so for now, we can just share the actual numbers behind the math model and perhaps not make premature judgements about the gameplay. Egyptian Tomb is a high volatility slot and the default RTP is 96.18%. So far, this suggests that we are following more or less a regular game plan. The max win potential for Egyptian Tombs is pretty nice, as we reach 10,000x. Usually, you expect smaller studios to be tamer, but with the backing of Microgaming, more doors are open. The bet range for Egyptian Tombs is 0.20 – 24 EUR/GBP.

During the Egyptian Tombs base game, you will spot 3 symbols below the game layout. These are 3 features that can trigger by a random chance. Altogether this is called the Super Spins. Depending on which variant you get, a bunch of symbols of this type will be added to the reels. So it’s either eagle/Horus, Cleopatra or Ra symbols. As mentioned before, during Super Spins, Ra symbols turn into wilds. 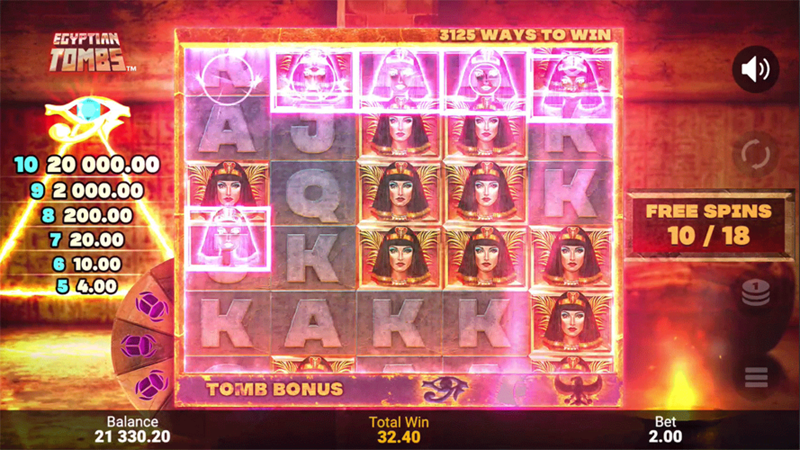 To get your hands on the Tomb Bonus, you will need to land 3 Egyptian Tombs Scarab symbols. These symbols appear on reels 1, 3 and 5 only. Tomb Bonus starts with a wheel mini-game. This wheel will randomly determinate how much Free Spins you will get. The amounts can be 8, 9, 10, 15, 20 and the big cut of 50. It’s also possible to re-trigger this Egyptian Tombs feature with additional 3 Scarabs. During Tomb Bonus the Super Spins are a lot more frequent, thus increasing your chances to score big.

Microgaming have a lot of great partners and we always love to see what sort of slots they come up with. Snowborn can still be considered rookies of the scene, but perhaps Egyptian Tombs can be their breakout game. We are reviewing an early state game, so it’s still hard to say, how successful this game can be after the release date. It definitely has a general appeal and the potential, that much is clear. Time will tell if Egyptian Tombs will be lost in the vast ocean of Egyptian slots or if it will have enough strength to stand out from the pack.