Imagine your life as a pirate in the latest slot by Relax Gaming. Open seas, rum-filled barrels and an overly optimistic sense of adventure. Dead Man’s Trail seems to be the perfect adventure slot for those who are looking for something more authentic. Relax Gaming have been on a roll. Just in a span of a month, they have released some impressive games and it seems like there is no stopping with Dead Man’s Trail. If you’re a fan of the Pirates of the Caribbean then you will love the sceneries on Dead Man’s Trail. There is much to see and much to experience, so you better be ready for life at the sea.

There are a lot of pirate-themed slots on the market, but the majority of them portrays the pirate life in a very positive and lighthearted manner, with beautiful blue skies, sea shanties and some silly pirates which are buzzed from rum. Scratch all that, because Dead Man’s Trail is grimy, gloom and most likely, more realistic. This is almost a unique approach from Relax Gaming. It’s hard to make a slot, which is dark, but fun and engaging at the same time. Relax Gaming might have just done it. With a possible 50,000x up for grabs, this definitely seems like a trail that is worth chasing.

Dead Man’s Trail looks grey and dreary but in all the best ways. As we said, providers mostly portray their pirate slots in a positive manner, but Dead Man’s Trail has gone with the more realistic setting, showing you the true side of the shadowy business. This looks like a proper pirates den, filled with a bunch of shady characters. Even though the atmosphere is quite drowsy, the background music fills us with adventurers optimism. We can surely say, that Relax Gaming have done wonders on the presentation. In fact, it’s probably one of the best looking pirate slots we’ve seen in a long time. 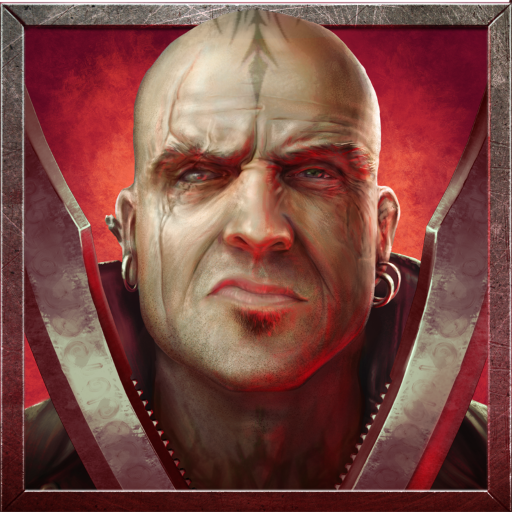 The paytable consists of 8 regular symbols plus the Wild. The low symbols are J, Q, K and A. The high symbols are four characters. Each of them has their unique look and none of them look too approachable, just like you would expect from a pirate. While going for a couple of spins, you will also notice coin symbols, which are a part of the Coin feature. Dead Man’s Trail slot has 40 paylines. The wins are made by matching 3 symbols of the same type.

Relax Gaming have become synonymous with high slot payouts. Pretty much all the latest slots from Relax Gaming come with great potentials. Dead Man’s Trail is not for the faint-hearted. This slot is highly volatile and requires a lot of patience. You can easily find yourself being stuck in a sea of empty spins, so if you really wish to chase that 50,000x win, then patience is the key. The default RTP is 96.29%, but it rises to an impressive 98% during Bonus Buy. The minimum bet is 0.20, while the max bet is just 20. Dead Man’s Trail runs well and it has many eye-catching animations making this one attractive slot.

Can’t have a pirate game without shiny coins, right? The Coin Feature is triggered when coins land on three separate reels. The coin values will simply get collected for an extra win. It’s a simple feature, that slightly spices up the Dead Man’s Trail main game.

The Dead Man’s Trail feature that we are more interested in is the Trail Bonus. This is a board game-style of bonus, similar to the one you can find on Jumanji, for example. To gain access to the bonus, players need to land 3 or more Bonus symbols or pay 100x for an instant entry. Each turn, players will make 1-9 steps. Just like a dice roll, this is determined randomly. The task is simple, survive for as long as you can, without landing on the End Tile, which ends the bonus feature. Normal tiles contain cash prizes, while the Start tile resets the special actions. Speaking of those, you will need to land on the Mystery Chest to active one of the special actions. These are the possible special outcomes:

• Scout – adds +100-1000x to a random tile
• One-Eye – multiplies the value of a Normal tile by 2-5x
• Commander – adds +3-5x to all tiles
• Collector – collect the total summed up value from all the Normal tiles
• Collect & Command – adds total summed up values of all Normal tiles to each tile, as well as adding it to the total win
• Reset – replaces all end tiles with Normal tiles
• Super Reset – replaces all end tiles with temporary Mystery Chests
• Coin Win – a random coin win of 25-50x
• Persistent Scout – works like Scout, but acts at the end of every turn
• Persistent One-Eye – same principle as the previous effect
• Persistent Commander - same principle as the previous effect 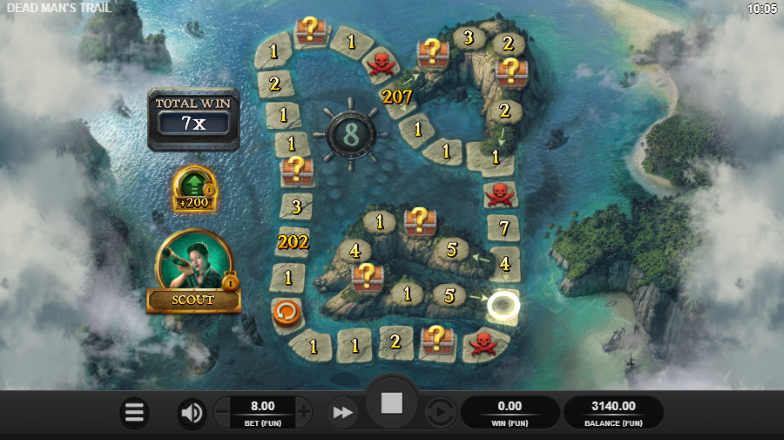 Dead Man’s Trail is a pirate adventure slot that we didn’t know we needed. There is hardly anything bad we can say about this game. Relax Gaming have created a unique and authentic presentation, which looks fantastic. The board game-style bonus is a pleasant break from the regular Free Spins routine and with that 50,000x up for grabs, we think that everyone will fancy a turn. The game model is not forgiving, as you can go through many empty spins before you actually get something, so if there are any downsides then that would be it. Otherwise, Dead Man’s Trail is a fantastic game from top to bottom.