One of the most recognizable novels “Alice in the Wonderland” has been portrayed in a lot of ways. We’ve seen new books, games and movies, all inspired by this wonderful and quirky fantasy story. Video slots haven’t been an exception, with such renowned slots as White Rabbit gracing our screens. This is also not the first attempt from Play’n GO, as just last year we saw Rabbit Hole Riches released. Court of Hearts seems to continue where the previous game left off. This fantasy is full of surprises, but we are mostly fantasizing about big wins, which we hope to get a lot of.

Just like the novel, not everything is as it seems. The regular looking 5 reel 3 row layout almost suggests another default slot from the provider, but Play’n GO have added the cascade mechanism, which is very popular with the Megaways slots. This, of course, is not a Megaways slot, because we have only 10 paylines, but it still provides some of that excitement with this addition. Play’n GO rarely disappoint, but not always they score perfect 10’s so together we’ll have to judge the performance of the Court of Hearts slot. Shall we go down the rabbit hole?

The original Alice in the Wonderland was written by Lewis Carroll in 1865. Since then we’ve seen many different interpretations of how the world and characters look like, but in general, the style is quirky and fictional. Play’n GO have done a fairly good job with Court of Hearts. We seem to be in a middle of a court sitting, which takes place in the magical forest. The music sets a bit of an intense mood going forward. The wooden 5x3 layout adds to the immersion. The same goes for the characters in the background, which makes the Court of Hearts slot look less static. Court of Hearts feels a lot more immersive as opposed to what we saw on Rabbit Hole Riches. 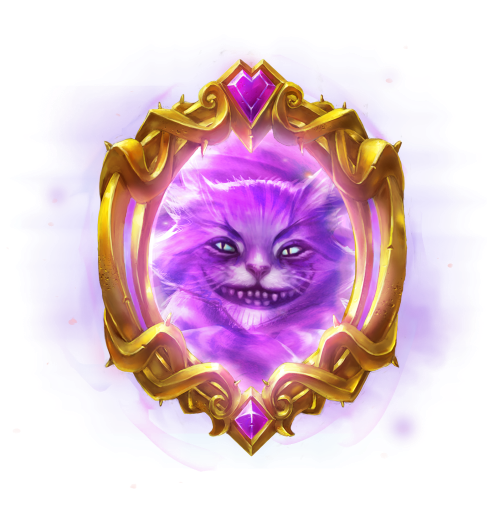 You will find a bunch of interesting characters in the Court of Hearts. This is something that Alice in the Wonderland is especially known for, the interesting and unusual heroes of the tale. Low symbols are four card suites with beautiful engravements. Meanwhile, high symbols are four characters – March Hare, The Hatter, The Knave of Hearts and the most valuable Queen of Hearts. During Free Spins the Queen of Hearts assumes the role of the wild symbol. As stated beforehand, the Court of Hearts uses a cascade mechanism, meaning that all winning symbol disappear, while new ones drop to replace the empty spots.

Court of Hearts certainly is a highly volatile slot, seemingly imitating the nature of the tale. If you play your cards right and find a pardon with Queen of Hearts then players can reach a win up to 8,500x. This is more than decent potential. Court of Hearts RTP is 96.27% while the bet range is 0.10 – 100, just like on a majority of Play’n GO games. The gameplay definitely feels a lot different compared to Rabbit Hole Riches, but we seem to enjoy this one more.

To keep things exciting and mysterious on Court of Hearts, the Rabbit Hole bonus can activate anytime during the main game or Free Spins. Rabbit Hole bonus symbol is a magical mirror, that contains one of the following characters/modifiers.

• Caterpillar awards 3 to 7 randomly placed wilds
• The Dormouse awards a Mega Wild which can grow up to a size of 4x3
• The Cheshire Cat awards a full reel wild, which moves a position with every new cascade 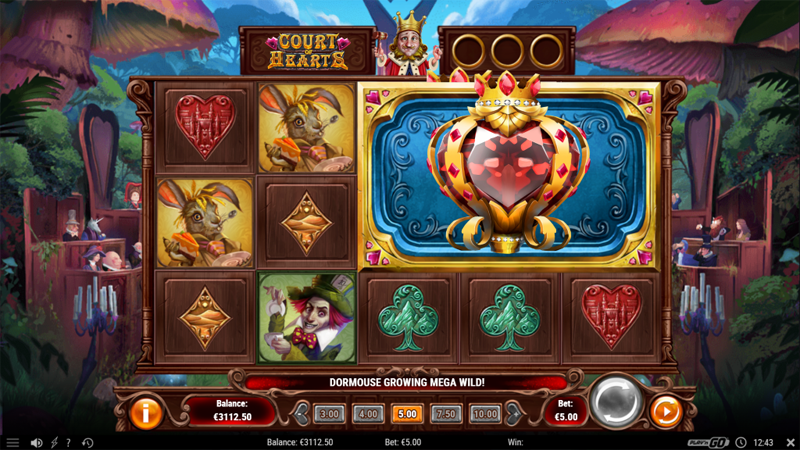 Three magical scatters trigger the Court of Hearts Free Spins feature. Sometimes, the White Rabbit can add 2 scatters to the reels, leaving you needing just 1 extra, but dropping all 3 at once also does the trick just fine. Initially, you are given 9 Free Spins, but during the bonus, each scatter adds an additional spin. Each win you get during Free Spins adds 1x to the total multiplier. The Rabbit Hole bonus also can be activated during this bonus stint. 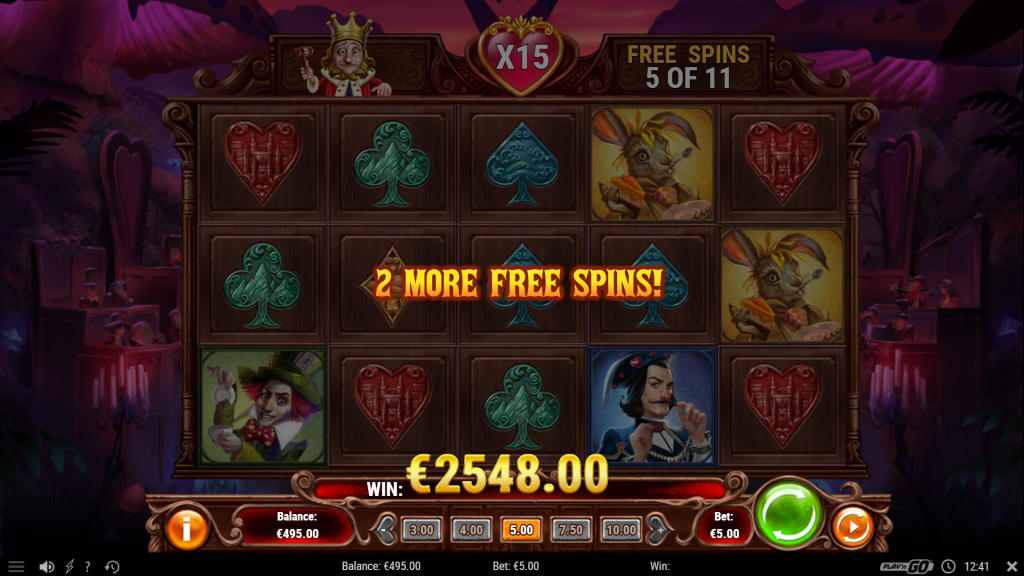 Court of Hearts essentially provides the Megaways experience without the Megaways tag. Of course, we only get 10 paylines, but the mechanics are awfully similar. Every win results in a cascade and every cascade during the Free Spins adds to the total multiplier. Court of Hearts visually is presented nicely, although nothing special, but nice nonetheless. The max win can reach up to 8,500x, but, of course, in reality, this is very tough to score, but still, the chance is there. Overall, we feel positive about Court of Hearts, we believe it can be especially fun for the fans of the novel.

Frozen lands of Frost Queen Jackpots also has the proper presentation for this time of year, it’s so chilly that we get goosebumps.

Great American TV show led by David Hasselhoff is making its appearance on a video slot. Be the new Knight Rider!