Here is a little backstory for y’all. The ancient Aztec tales tell, that the city of Coba was protected by Quetzalcoatl, which is a Mayan deity in a shape of a large snake. The spirit has kept people protected, but those who dare to oppose or anger the god can feel his dreadful wrath. Coba is a slithering slot and not for those with ophidiophobia (fear of snakes). But perhaps you want to challenge yourself and face your deepest fears? Then step right up, because Coba is a one-of-a-kind slot, in the best possible ways.

This isn’t the first time that ELK Studios put a smile on our faces. They have this extremely proficient ability to create new and exciting slots, which always feel different from one another. Sure, we have experienced plenty of Aztec slots before, but Coba is a different breed. This Mayan cluster slot has exceptionally entertaining gameplay and some crazy bonus features. The best bit for some could be the massive potential that the Coba slot possesses. Even if you’re tired of Aztec expeditions, we don’t think you would want to pass up on this chance.

If you take away the whole backstory of gods’ protection, then yes, Coba may seem like just another Aztec slot. Some old ruins, some sights of nature and a slightly creepy soundtrack - perfect for some human sacrifices. In all seriousness though, Coba is a nice-looking slot. Perhaps a bit basic, but people still play Aztec slots so why not. The hexagonal layout is rather unique though. It’s not stacked equally, instead, some rows are shorter and some longer. This creates this nice rolling effect when symbols drop into empty spots left by other winning symbols. 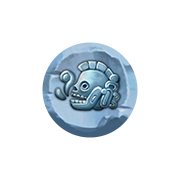 If you’re not familiar with the concept, cluster slots are casino games with no paylines. You make wins by combining clusters of symbols. These clusters need to combine 5 or more matching symbols, but it doesn’t matter which direction symbols are facing, as long as they are next to each other. Although not the most exciting bunch, symbols on Coba are well made. The three most commonly found symbols are stone tables with drawing on them. Three gemstones bring in much higher payouts, but the gold coin is especially valuable, as it provides the best payouts in the game. A hefty combination of 15 such symbols brings a 500x win. Of course, it’s no easy feat to get 15 matching symbols at once.

Moving on to payout stats. Coba is a curiously built slot. It has a huge max potential of 25,000x but, the slot itself is not that volatile. There is always some action going on, some combinations on the screen, although a lot of times, this action is rather tame. It’s almost like Coba is constantly bubbling and then at any point, it can explode most favourably. The Coba slot has a 95% RTP, so a bit on the low side. The bet range for this ELK Studios slot is 0.20 – 100.

Bring your eyes closer to the Snake Meter on the right side. Each winning cluster on Coba is collected and added to this meter. Like on many cluster slots, the meter contains various modifiers which are unlocked by collecting a certain amount of symbols. There are four levels in total.

The first level activates a snake which slithers across the game layout. Snake essentially is a walking cluster, meaning they randomly move around leaving symbol clusters in their path, which leads to some decent payouts. The snake can consume symbols growing itself in size. If the snake fails to eat the same matching symbol, then it dies off. Snake is also removed if it crosses its own body. On the opposite, if there are two snakes on the screen, their crossing creates a 2x Wild multiplier in the position they crossed. The further you progress in levels, the more snakes are added to the layout.

By the grace of the X-iter feature, the player may also purchase bonuses on the Coba slot. X-iter is present on pretty much all ELK Studios slots. 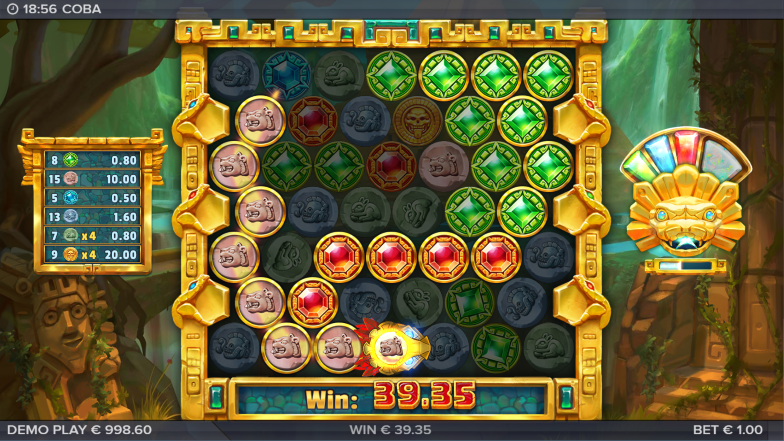 At first, we had an assumption that many of you might be having as well. Coba seems like another basic Aztec slot, that promises gold and riches. That is not entirely true, as Coba is much more unique. Yes, the Aztec theme is somewhat recurring, but at least we’re getting a different twist which focuses on this snake god, that we haven’t seen before. The gameplay on Coba can be extremely fun, especially in the moments when you have multiple snakes on the screen. As they go by, eating symbols and creating multipliers, you are filled with a sense of excitement, that we haven’t felt in a good while. For a medium volatility slot, Coba provides a stunning 25,000x max payout. This ELK Studios slot is worth checking out if you’re asking us.

What is the RTP on the Coba slot?

The RTP on this ELK Studios slot is 95%.

There are many great ELK Studios slots, but some of the best ones are Taco Brothers Derailed, Illogicool, Tropicool and Cluster Slide

What is the max bet on the Coba slot?

A majestic and rich place, favoured by the gods. Visit the ancient city of Troy and learn what treasures you can find here